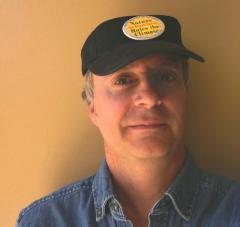 Russell Cook is a contributing editor for The Heartland Institute‘s Environment & Climate News.

Russell Cook is “neither a scientist nor a trained journalist,” but rather, “a common citizen having reasonably adequate enough education and an inquisitive enough mind to observe and question contradictory stories in the media about global warming.” [2]

Cook is the author of GelbspanFiles.com, where he “dig[s] deeply into the accusation that scientists and others who express skepticism about the theory of man-made global warming are being paid by the fossil fuel industry to lie about the issue.” [2]

Cook has written over 60 pieces about “the false accusation that skeptic scientists are paid to lie about global warming.” [3] On his website, he states that the funding for the articles he’s written come with “one unbreakable condition: No strings of any kind.” [2]

Cook notes that, prior to January 2013, he was paid $1,000 by the Science & Public Policy Institute and $1,350 by the Committee For A Constructive Tomorrow. But “neither payment,” he said, “came with instructions of what position I was to take on global warming.” [2]

After January 2013, with his “savings drawn down to a critical level,” the Heartland Institute offered Cook a “$12,000 strings-free grant to enable [him] to continue devoting time to [the] subject. I have carte blanche to write whatever I wish to write, whenever I wish to write it, without any direction from Heartland, its donors, or anyone else,” he writes in GelbspanFiles.com in a section titled, “A Note About Funding.” [2]

Russell Cook is a contributor to American Thinker, Breitbart.com, Red State, GlobalWarming.org, Watts Up With That, and other websites. [3]

“My conclusion can be readily summarized: the accusation [“that those who express skepticism about the theory of man-made global warming are being paid by the fossil fuel industry to lie about the issue”] appears to be a false claim, a myth generated by a small group of enviro-activists with significant direction from ex-Boston Globe reporter Ross Gelbspan.” [4]

“Warmist true believers bitterly cling their mantra that only the corrupting influence sinister money could possibly explain skepticism toward the theory they embrace as gospel truth.

In case anyone is unfamiliar with the simplicity of the man-caused global warming idea: overwhelming scientific conclusions say we are causing floods / droughts / blazing summers / intense winters, and don’t listen to any skeptic scientists – they’re corrupt.” [6]

“AGW believers hope the Supreme Court will ultimately accept the simple mantra that global warming science is settled, thus corrupt skeptic scientists must be ignored.  Sadly, it takes a maddening amount of detail to tell how this group is interconnected in its efforts to manipulate us into believing such a simple concept.  That’s the double-edge.” [5]

“I’m no investigative journalist, I’ve never taken a journalism class, and I don’t want to be a journalist when I grow up. I’m just a semi-retired idiot graphic artist who keeps asking how policymakers, environmentalists and mainstream news outlets justify their demand to regulate CO2 and why skeptic scientists should be silenced.” [6]

“As common citizens without science expertise, the majority of us are forced to leave the debate over the actual causes of global warming to the scientists.  But we can participate in another process – namely, finding out for ourselves whether the narratives about the issue and its scientists ring true.  Examples include whether a commonly heard description about skeptics being “climate deniers” is true, when elemental examinations of skeptic reports indicate that it’s more accurate to say they dispute that the United Nations’ Intergovernmental Panel on Climate Change (IPCC) has conclusively made the case for human-induced greenhouse gases being the primary driver of global warming.” [7]

Cook was among a group of climate change deniers who responded with their own open letter, calling for the AMNH “not to cave in to this pressure.” The letter was signed by numerous individuals with ties to groups funded by the Mercer Family Foundation such as Will Happer of the CO2 CoalitionRichard Lindzen, a fellow at the Cato InstituteCraig Idso, the chairman of the Center for the Study of Carbon Dioxide and Global Change. There are a number of signatories affiliated with the Heartland Institute, which has received over $5.78 million from the Mercer Family Foundation since 2008. [15]

The October, 2014 email was leaked to journalists before the documentary was released. “Can I sue for damages?” Singer asked in the email. “Can we get an injunction against the documentary?”

InsideClimate News reports in their article “Leaked Email Reveals Who’s Who List of Climate Denialists,” how “Many of those copied on the email thread, such as Singer and communications specialist Steven Milloy, have financial ties to the tobacco, chemical, and oil and gas industries and have worked to defend them since the 1990s.” [10]

InsideClimate News also documented all those who were cc’d on the email, including the following skeptics and groups:

Russell Cook was a speaker at the Heartland Institute’s Ninth International Conference on Climate Change (ICCC9) in Las Vegas, Nevada. [8]

View DeSmogBlog’s in-depth research on the other speakers and sponsors from Heartland’s ICCC9.