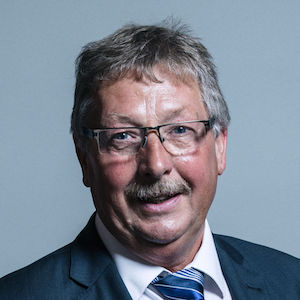 Sammy Wilson is an MP for Northern Ireland’s Democratic Unionist Party (DUP) for East Antrim. He is a former environment minister and one of the DUP’s most controversial figures when it comes to climate change. [1]

Until Brexit, the DUP hadn’t garnered much attention in the British press but the party has a long history of science denial. A survey among DUP members found that 40 per cent believed creationism should be taught in science classrooms. And largely thanks to DUP lobbying, Northern Ireland remains the only part of the UK with no legally binding climate change targets in place. [2], [3], [4]

In June 2017, following rumours of a Tory-DUP post-election deal, Green Party co-leader Caroline Lucas referred to Wilson and his Party. She said: “Is her [Prime Minister Theresa May’s] failure to propose a Brexit bill on the greatest challenge that we face because she simply doesn’t care about the environment and climate change, or because she’s been influenced by the DUP dinosaurs who sit beside me and don’t want to take that kind of leadership in the future?” [5]

Wilson has previously said that he believes human caused climate change is a “gigantic con” and an “hysterical semi-religion,” and denies that there is a scientific consensus on the causes of climate change. [4]

According to his website: “His appointment and tenure as Environment Minister were heavily criticised by Environmental Groups because Sammy believes that climate change is not man-made and the myth of climate change is based on dodgy science not proven. He is not a fan of the Green Lobby who try to scaremonger people with their alarmist views.” [1]

Following the conclusion of COP26, Wilson was quoted in Belfast-based News Letter saying: “The idea that our climate hinges on small changes in CO2 – of which 97% is produced by natural causes and only 3% from human activity – is clearly nonsense.” [19]

“The biggest fact driving climate change is the sun and earth’s relationship to changes in
its orbit, along with ocean currents, airstreams in the upper atmosphere, volcanic activity
and the release of greenhouse gases from natural sources such as melting permafrost
and decaying vegetation.”

Wilson also said that he is a “firm believer in climate change,” and claimed that people who have “worked themselves into a frenzy about man made climate change” are “the real climate change deniers” because they “ignore the fact that the world’s climate has continually changed even before mankind started burning fossil fuels.” [19]

Wilson wrote a article for the News Letter where he “spells out his scepticism about man-made climate change.” [6]

“We have never clearly understood the causes of these changes and despite what some environmentalists say there is no scientific consensus around the causes. Some claim that recent climate change is due to CO2 production from industrialisation, our energy use, our love affair with the car and foreign holidays by jet airplane. The difficulty with this explanation is that climate change occurred even when we did not have the increase on CO2 emissions experience in the last 200 years. Another difficulty they have is that the increase in CO2 occurs after the increase in temperatures.”

According to Wilson “resources should be used to adapt to the consequences of climate change rather than King Canute style vainly trying to stop it.”

“[V]ery wise decision by the US President to pull out of the totally flawed and pointless Paris Climate Change agreement.”

In the same statement published on his website, Wilson said: “The Paris Agreement itself is a delusion,” adding:

“[P]ulling out of the agreement which was only a piece of window dressing for climate chancers who wished to pretend that they were doing something about an issue which they can’t affect anyhow is not the disaster which the green lefties are getting hysterical about.”

Speaking to the Belfast Telegraph: [8]

“I think in 20 years’ time we will look back at this whole climate change debate and ask ourselves how on earth were we ever conned into spending the billions of pounds which are going into this without any kind of rigorous examination of the background, the science, the implications of it all. Because there is now a degree of hysteria about it, fairly unformed hysteria I’ve got to say as well.”

“I don’t care about CO2 emissions to be quite truthful because I don’t think it’s all that important but what I do believe is, and perhaps this is where there can be some convergence, as far as using fuel more efficiently that is good for our economy; that makes us more competitive. If we can save in schools hundreds of thousands on fuel that’s more money being put for books or classroom assistants.”

According to Belfast-based daily newspaper NewsLetter, Wilson criticised the government’s strategy for reaching net zero carbon emissions by 2050, stating that as a result of decarbonisation, “our food will have to include insect larva, maggots, seaweed and algae.” Wilson also reportedly said that: “It may be easy to buy into the virtue signalling policies of reducing CO2,” adding: “It’s not so attractive when the impact on cost of living, jobs and what we eat is spelt out.” [18]

Wilson was quoted in the Belfast-based News Letter criticising the Climate Change Committee (CCC)’s advice to the Government on cutting UK carbon emissions by up to 80 percent by 2035. Wilson characterised the CCC as a “bunch of killjoys,” stating: “The committee is utilising the tactics of fear, this time about the future of the planet, to instruct us to fly and drive less, stop eating meat and put less butter on our toast,” adding: “we must not allow a new group of zealots to force poor people into further poverty or restrict the freedoms of those who want to or have to travel.” [17]

In the House of Commons, Wilson said that the cutting down of trees in Scotland to make room for wind farms were “acts of economic vandalism”. In a tweet sharing the video, Wilson also said the expansion of wind energy would “increase energy costs for millions”. [16]

Wilson was photographed with major Brexit funder and UKIP backer Arron Banks after his appearance in front of a parliamentary committee to defend accusations of collusion with Russia in advance of the EU referendum and President Donald Trump’s election. [9]

Wilson welcomed Trump’s withdrawal from the Paris Accord on climate change as “very wise.” [7]

The DUP reportedly distanced itself from Sammy Wilson following “racist remarks” given by Wilson off camera while being interviewed for BBC Spotlight. Video of the interchange is available at the Belfast Telegraph, courtesy of BBC Spotlight. [10], [11]

In the video, Wilson was talking to a member of the public, who said, “Get the ethnics out,” to which Wilson appeared to reply, “You are absolutely right you know.” [10]

A DUP spokesman said: “Sammy Wilson is reported to have made comments this morning about ethnic minorities. The DUP values everyone who comes to Northern Ireland and makes a contribution to our society. [10]

“Ethnic minorities are vital to our biggest and best companies never mind our Health Service. ‘Get the ethnics out’ is a disgraceful phrase. We disassociate the party from the comment made by a member of the public. [10]

“Whilst there needs to be a discussion about how we control our borders, this should be conducted in a factual and respectful manner as part of the EU referendum debates.” [10]

Wilson organised a meeting in the House of Commons in central London on behalf of “Repeal the Act”, a group that argues the “climate is always changing” and seeks to repeal the UK’s Climate Change Act. In attendance were known climate science deniers Peter Lilley and David Davies, alongside contrarian economist Richard Tol. [12]

In 2010, Wilson hosted a group of climate science deniers at the Palace of Westminster for “Climate Fools Day.” The event was supported by Labour MP and Global Warming Policy Foundation member Graham Stringer. One of the event invites read: “The danger is not Climate Change but Climate Change Policy – for which there is no evidence in justification.” [13]

Wilson placed a ban on UK government TV and radio adverts that were encouraging people to cut their carbon emissions. Wilson described the ads as insidious green propaganda. [14]

Sample publications by Sammy Wilson below: