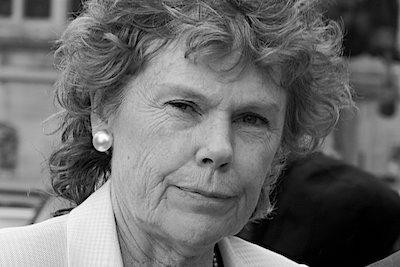 Kate Hoey is the former Labour MP for Vauxhall and was a prominent Brexit-supporting figure within the Labour Party during the EU referendum. [1], [2]

She was appointed by Prime Minister Boris Johnson to the House of Lords in a July 2020 honours list which received criticism for including several of Johnson’s prominent political allies as well as known deniers of climate science. [32], [33], [34]

Born in Northern Ireland, Hoey is a hardline unionist, a Eurosceptic and a libertarian who has at times voted against the Labour party whip. [1], [3], [4], [5]

Hoey was a co-chair of Labour Leave before falling out with the group. According to a 2016 article in The Telegraph, Hoey did not publicly announce her resignation, but would no longer attend events. As of 2019, Hoey was still listed as a “Supporter” on the Labour Leave website, and was introduced as the group’s “Chair” in a 2018 event description. [6], [7], [8]

Following the reported leadership dispute with Labour Leave, Hoey co-founded Grassroots Out, alongside prominent DUP climate science denier Sammy Wilson. She was seen on the Brexit campaign trail alongside Nigel Farage and accompanied Arron Banks to Washington in 2016. Meetings were scheduled with a number of US conservative and libertarian think tanks including the Heritage Foundation and the Cato Institute. [9], [10]

In an interview with Sky News, she described the EU as a “Stalinist form of organisation.” [11]

Hoey has not been afraid to show her sympathy for the Democratic Unionist Party (DUP) in Northern Ireland. She previously told the Irish Times, the DUP have been misunderstood by the British media: [3]

“It’s because there’s a total lack of understanding of the pro-union community in Northern Ireland by most of the liberal media in this country and by the liberal establishment,” she said.

Like the DUP, she repeatedly argued that Northern Ireland should not be treated differently than the rest of the UK. [12]

She was critical of the ban on handguns and has shown ongoing support for fox hunting. She has voted against Labour’s anti-terrorism laws, introducing ID cards, a wholly elected House of Lords and replacing the Trident nuclear programme. [13], [14], [15]

The following statement on climate change was previously published on Kate Hoey’s website: [16]

“Climate change remains both a threat and an opportunity, as we look to move towards a new, green, low carbon economic and energy future. Labour has promised to meet our carbon reduction targets, while seriously addressing energy efficiency and insulation and banning fracking.

At the same time, we must support consumers who have faced rising energy bills as the government have failed to ensure that the industry has enough working competition to keep prices low. We will cap the average duel fuel household energy bill remains below £1000 per year, and introduce public sector energy competitors to keep the market honest.”

“It’s because there’s a total lack of understanding of the pro-union community in Northern Ireland by most of the liberal media in this country and by the liberal establishment,” she said.

In an interview with Guardian columnist Owen Jones, Hoey said she had no regrets campaigning alongside Nigel Farage in the Brexit referendum campaign, adding: [17]

“I really don’t think Nigel Farage is a racist.”

Hoey was appointed by Prime Minister Boris Johnson to the House of Lords. [32]

Hoey was one of three Labour MPs (including Frank Field, climate science denier Graham Stringer as well as suspended MP Kelvin Hopkins) to vote with the government and narrowly avoid a major defeat for Theresa May over the Brexit Customs Bill. [18]

She backed an amendment to the bill which would force the government to agree to commit to never having a border in the Irish Sea — against an EU proposal to allow Northern Ireland to remain in the customs union. [19]

Hours before the vote in the Commons, Hoey and Frank Field were pictured speaking to the hardline Brexiteer and former Brexit junior minister Steve Baker, also a member of the European Research Group, a publicly-funded Tory research group aiming to ensure a hard Brexit is not compromised. [21]

Baker is revealed to have co-ordinated the creation and running of a WhatsApp group for backbench MPs who were being asked to vote for ERG amendments over the government’s Customs Bill. [22]

Aaron Banks told the Digital, Culture, Media and Sport Committee that Hoey was offered an office at the Leave.EU London office at Millbank Tower during an MP questioning as part of its inquiry into fake news. [23]

Banks told the committee of MPs: “Kate Hoey fell out with Vote Leave […] and we gave them an office with us in Millbank.” [23]

Ukip leader Paul Nuttall announced that the party will not field candidates against Brexit-backing MPs in the general election and endorsed Hoey’s candidature in Vauxhall. [26]

Nutall told the Birmingham Mail: “If there is a Brexiteer with a slender majority and there is the opportunity that they will lose the seat to a remainer, then the UKIP branch will indeed be asked if it is a good idea to stand aside.” [26]

Hoey campaigned alongside Nigel Farage on his Brexit flotilla on the Thames. [27]

Hoey received a £5,000 donation from Aaron Banks, one of the main donors to the Leave.EU group headed by Nigel Farage, to attend the White House Correspondents’ Dinner and meet politicians in Washington regarding the EU referendum. [28]

A Leave.EU press release said Banks and Hoey would “meet policy leaders, political thought leaders, and media to build support for Brexit and to convey the benefits for the United States should the United Kingdom vote to leave the European Union when the upcoming referendum takes place June 23.” [10]

The trip’s agenda also included meetings with the Atlantic Council, the American Foreign Policy Center and US-based think tanks known for spreading climate disinformation the Heritage Foundation and the Cato Institute. Meetings with the US Treasury Department and the Department of State were also organised.  [10]

Hoey reportedly quit her role as co-chair of Labour Leave, which was affiliated to Vote Leave, following internal squabbling and infighting. [6]

In an opinion column for The Independent, Hoey argued that voting to leave the EU is a left-wing move. She described the EU imposing “unprecedented levels of austerity on Greece” as  “a real wake-up call” and slammed the union as “an unaccountable force bringing crippling pain.” [29]

She made the case for the UK to “reach out globally,” particularly to the Commonwealth while “stopping being Little Europeans and become Internationalists again.” [29]

Hoey launched Labour for a Referendum (later renamed Labour Leave) calling for an in-out vote on the UK‘s membership to the EU. She told the BBC it was “absolute madness” not to back a referendum and described the EU as a “sick organisation now that is going to get worse.” [30]

The Fermanagh Herald reported that Hoey endorsed now DUP leader Arlene Foster in the 2005 general election for the seat of Fermanagh-South Tyrone. [31]

A picture of the article cutting shows Foster being quoted saying: “We have known each other since student days and I would have worked with her in the Friends of the Union. When I was nominated by the DUP, she told me if there was anything she could do to help and I suggested she would come to Enniskillen to endorse my candidature.” [31]

Some sample publications below: