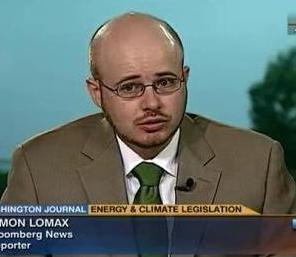 Simon R. Lomax is an Australian-born journalist. After earning a degree in journalism at Queensland University of Technology, Lomax immigrated to the United States in 2002. He moved to Washington as an energy and environment reporter for Argus Media in 2004 where he has written articles favorable to the fossil fuel industry. He has worked on a contract basis with the Independence Institute as an associate energy policy analyst since late 2015. [1]

Since transitioning from primarily journalism to advocacy in 2012, Simon Lomax has contributed to a western United States fossil fuel industry network with the Western Energy Alliance at its center. The Western Energy Alliance is made up of more than 300 oil and gas drilling companies as well as banking and financial institutions and industry consultants. According to their website, the group supports “policies encouraging job growth, investment and timely access to western federal lands.” As of 2010, Western Energy Alliance advertised membership benefits as including “A professional staff monitoring and influencing regulatory and legislative actions” and “access to special events with regulators and legislators.” [2], [27]

Lomax has also worked for FTI Consulting, and Energy In Depth. In the past seven years, nearly all of the groups he works with have financial and personnel ties to the Western Energy Alliance and promote fossil fuel deregulation.

Lomax has regularly contributed op-eds, media appearances, and Congressional testimonies with a strong focus on advocacy for hydraulic fracturing (“fracking”) deregulation and criticism of environmental groups and policies. Since 2015, Lomax has also been active in opposing anti-fracking efforts in Western states like California, Nevada, and New Mexico.

Champion for the “Fracking” Industry

In January 2015 Lomax wrote an op-ed titled “New York Fracking Ban Throws Peer Review Under the Bus,” where he claimed studies supporting the fracking ban were “actually peer-reviewed by active opponents of shale gas development who concealed their bias from the scientific community and the general public” and an attempt to “subvert the peer-review process.” [3]

In March, Lomax followed up with a Financial Times piece—one of a series of op-eds and media appearances in spring 2015 in which Lomax argued New York Governor Andrew Cuomo’s hydraulic fracturing ban was an example of “junk science” or were examples of poor peer review. [4]

Just over one month after penning a piece in the Financial Times, Lomax was a witness to a hearing before the Committee on Science, Space, and Technology at the House of Representatives entitled “Hydraulic Fracturing: Banning Proven Technologies on Possibilities Instead of Probabilities.” The Committee was chaired by Lamar Smith. [5]

Lomax has portrayed the environmental movement opposing fracking as elite, with an example being his consistent criticism of billionaire-environmentalist and political contributor Tom Steyer. Lomax is quoted in 2017 Washington Times article, declaring that, “Tom Steyer isn’t just bad at politics; he’s the biggest loser of the past two election cycles”; a 2014 Energy In Depth piece written by Lomax is titled, “Anti-Fracking Activism: A Game for Millionaires and Billionaires (like Tom Steyer).” [6], [7], [8]

Lomax has also criticized former Boulder Congressman and current Colorado Governor Jared Polis. Lomax has called Polis’s opposition of hydraulic fracturing “radical” and called him out for teaming up with “fringe environmental groups.” [9]

Since his Twitter account’s conception in winter 2017, Lomax has not once mentioned the terms “climate change” or “global warming.” He also does not appear to have mentioned it in his editorial pieces.

In a statement to CBS News, Lomax criticized a student activism campaign calling for divestment: [10]

“There are more than 11,000 students at DU and just a handful of them walked out of class today. That tells you the fossil-fuel divestment campaign, which is run by 350.org in New York, has almost no traction with DU students at all. We hope DU sees through the 350.org divestment campaign. It’s a costly political stunt that will hurt DU students and faculty without doing anything – on campus or off campus – to lower carbon emissions.”

Speaking of climate litigation efforts by state Attorneys General against oil companies including ExxonMobil, Lomax said on an episode of “Devil’s Advocate” with John Caldera: [11]

Lomax: “Let me start with the bad news. So, the bad news is there’s a group of Democratic attorneys general at the state level who have basically decided they want to use their law enforcement powers to go after people who disagree with the Obama climate agenda and especially the Clean Power Plan.

So, basically, their legal theory is that if you disagree with them on climate change, that’s fraud, and therefore the First Amendment no longer applies to you.”

Jon Caldara: “Make sure I got this clear: [if] you disagree with climate change, you’re not wrong, your fraudulent.”

Caldara: “It’s not like, let’s argue, this, let’s argue that. No; you’re fraudulent and you need to be brought to justice.”

Lomax: “Right. Therefore, they can subpoena you, they can demand you turn over documents, emails, phone records, all that kind of thing. So that’s the bad news. Now the good news is that this effort is really kind of falling apart. It’s not going the way they hoped.”

Caldara: “I want this to keep going because it’s just hysterical.”

In an episode of “Devil’s Advocate,” an Independence Institute talk show featuring President John Caldera and Lomax, the pair attacked climate litigation efforts by state Attorneys General against organizations like ExxonMobil, the Competitive Enterprise Institute, and the Cato Institute. [11]

The discussion, which from the offset describes climate change as a “raging debate,” frames climate accountability litigation as an environmentalist assault on free speech: “If you disagree with them on climate change, then that’s fraud, and the first amendment no longer applies to you,” Lomax explained.

Since 2015, Lomax has been as an associate energy policy analyst with the Independence Institute, a Colorado-based libertarian think tank with a stated mission “to empower individuals and to educate citizens, legislators and opinion makers about public policies that enhance personal and economic freedom.” The organization, described by its President, John Caldera, as a sister organization to the Competitive Enterprise Institute, received $141,000 from Koch foundations between 2000 and 2006, has received $1.42 million from the NRA, and has been funded by organizations such as Donors Trust, the Adolf Coors Foundation, and oil corporations including Chevron and Mobil. [20], [11], [21], [22]

Lomax has served as research director and western director for the oil-industry- funded Energy In Depth, a media project of the Independent Petroleum Institute of America (IPAA) and FTI Consulting. [1], [23], [24]

Lomax serves as the managing editor of Western Wire, a news service established by Western Energy Alliance in 2017 that regularly publishes artilces in favor of the fossil fuel industry. According to E&E News, Western Wire’s website expresses that support for the fossil fuel industry, “Runs deep throughout western communities. But those voices don’t get the same attention as the well-organized minority of opposition groups. So we decided to do something about it.” [12]

Lomax was hired as a research fellow at Vital For Colorado in 2017, described by DeSmog as “a well-funded and highly active pro-fracking front group.” Vital For Colorado produces pledges and newspaper pieces with messages like “say no to anti-fracking regulations”. One run in Pueblo and Grand Junction in March 2014 read, “Don’t be fooled […] under the guise of local control, special interests are trying to create energy chaos in Colorado.” [17], [25], [26]

Lomax is an adviser and spokesperson to the IPAA project Divestment Facts, a platform established in response to a 2015 campaign of student environmental activism at Denver University calling for the university’s divestment from fossil fuels. [14], [15]

According to his profile at the Independence Institute, Lomax is regularly quoted or has written as a guest columnist in news sources such as Associated Press, Bloomberg News, Fox News, National Review, Politico, The Hill, The Washington Examiner, The Washington Times, Forbes, The Las Vegas Review-Journal and The Financial Post. [1]

Some sample publications below:

Below are Simon Lomax’s publications listed at Energy in Depth: