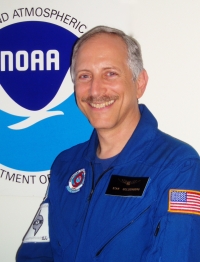 Stanley B. Goldenberg is a Meteorologist with the Hurricane Research Division/AOML/NOAA located in Miami, Florida. He is one of the lead authors of NOAA‘s Seasonal Hurricane Outlooks for the Atlantic basin.

Goldenberg received his M.S. in Meteorology under the guidance of fellow climate change skeptic Jim O’Brien.

Goldenberg is known for his views on arctic sea ice. While Goldenberg has conceded that “it is possible that a small fraction of the increase in hurricane activity might be associated with the gradual, long-term SST increase,” he is also on the record for claiming there is raw data showing an increase in Arctic sea ice depth and an expansion of its coverage. [9], [10]

“Just because climate change has happened doesn’t mean AGW. Just because weather disasters happen doesn’t mean AGW. And an inconvenient truth that most of the media are speaking of, CAGW – that’s very important. They’re not just talking about AGW, but catastrophic [anthropogenic global warming]. If we just have a little bit of warming from manmade causes, nobody really cares, but they’re talking about it’s going to be catastrophic.” [2]

“[The scientific consensus] is a blatant lie put forth in the media that makes it seem there is only a fringe of scientists who don’t buy into anthropogenic global warming.” [3]

“Not a single, to my knowledge – not a single scientist at the National Hurricane Center, the Hurricane Research Division, the Joint Typhoon Warning Center – I’m trying to find out about the Central Pacific Hurricane Center – believe that hurricanes – numbers, activity – that there’s any measurable impact from any so-called global warming.” [2]

Stanley Goldenberg was a speaker at the Heartland Institute’s Ninth International Conference on Climate Change (ICCC9) in Las Vegas, Nevada. [13]

Goldenberg was a speaker at the Heartland Institute’s Seventh International Conference on Climate Change (ICCC7). [4]

His speech, titled “Hurricaines and other weather events” can be viewed below.

Goldenberg was a speaker at the Heartland Institute’s Second International Conference on Climate Change (ICCC2).

His speech, titled “Is There a Link Between Global Warming and Hurricane Activity?” can be viewed below. [5]

DeSmogBlog researched the funding behind Heartland’s Second International Conference on Climate Change, and found that sponsor organizations had received over $47 million in funding from energy companies and right-wing foundations, with 78% of that total coming from Scaife Family foundations.

Goldenberg is listed as a signatory to the Manhattan Declaration. The declaration was released after the Heartland Institute’s First International Conference on Climate Change. [6], [7]

Goldenberg was a speaker at the Heartland Institute‘s First International Conference on Climate Change in New York (ICCC1) His speech, titled “The Mythical Link Between Hurricanes and Global Warming” can be viewed below.

According to his profile at AOML/NOAA, Stanley Goldenberg has published 13 articles in peer-reviewed journals, primarily on the subject of Hurricane activity in the Atlantic. A number of his publications were co-published with climate change skeptic Chris Landsea, and one with Jim O’Brien.