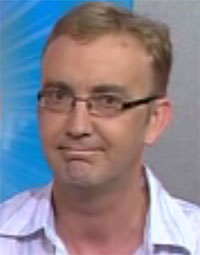 According to Franks, “I’m primarily a hydrologist, but I study what we call hydro-climatology, and that really is the hydrological impacts of climate variability.” [2]

Stewart Franks has regularly appeared in the media presenting views skeptical of climate change, and has also expressed his views before a Senate Committee on Climate Policy. [3]

Franks is a hydrologist, not a climatologist, although he sometimes describes himself as a “hydro-climatologist” because, he jokingly said, “nobody knows what that is.” [4]

According to a 2012 disclosure statement, at the time, “Stewart Franks receives funding from the Australian Research Council, and a range of industry bodies including Sydney Catchment Authority, Hunter Water Corporation and Macquarie Generation.” [6]

Franks was quoted in a 2009 article at Newcastle Herald:

“I don’t think anybody knows the real role of carbon dioxide in climate change. To say it will be catastrophic is wrong. There is no evidence that CO2 drives climate change, but it continues to be used to scare people into action.

“A key concern is that the Intergovernmental Panel on Climate Change, which advises governments around the world, has used the Murray-Darling Basin and incorrect science as an example of CO2-induced climate change.” [5]

Franks testified before a Select Committee on Climate Policy alongside Robert Carter:

“I am concerned that the global public, certainly in the western world, is being railroaded into this notion of disastrous climate change for which there is no empirical evidence. […]

“How can we say CO2 is a scientifically proven theory of disastrous climate change? We cannot. We can be concerned about the future, but until it shows itself demonstrably there is no empirical evidence of CO2 leading to this runaway climate change. […] [3]

In an article at The Conversation, Franks wrote:

“The mistake that Tim Flannery, as well as the numerous expert commentators made, was that they confused climate variability for climate change. The future impact of climate change is very uncertain, but when one ‘wants to believe’, then it is all too easy to get sucked in and to get it spectacularly wrong.” [6]

Franks spoke at the Institute for Pubilc Affairs (IPA) book tour of Climate Changes: The Facts 2014 in Sydney, Australia. View video below: [16]

According to Franks, statements in the media comparing extreme weather events or trends in weather like droughts in Australia are “completely meaningless.”

“The point is, you can’t judge climate change by droughts. Can’t judge it by floods. Is it even warming? … No. Doesn’t look like it, does it. As put in that last 17 years, the numbers are a bit rubbery. Depends on your dataset.”

“The climate models don’t work, so they need to find a reason why. So they’ll deny the problem until they can think of a narrative.”

Stewart Franks is a contributor to the book Climate Change: The Facts published by the Institute of Public Affairs and featuring “22 essays on the science, politics and economics of the climate change debate.” The Institute of Public Affairs, while not revealing most of its funders, is known to have received funding from mining magnate Gina Rinehart and at least one major tobacco company.[11]

The book includes essays and articles from a range of climate change skeptics, with contributors including the following:

According to Editor Alan Moran in a post at Catallaxy Files blog on Climate Change: the facts 2014, Stewart Franks’s contribution is as follows:

“Drawing heavily upon Karl Popper’s theories that scientific mate­rial should be subject to constant examination and should be falsifiable, Stewart Franks points to the many phenomena of climate change that the increase in greenhouse gases both failed to predict and fail to explain.” [12]

Stewart Franks was a signatory to a petition-style project organised by climate sceptic group the International Climate Science Coalition, which asked people to endorse a statement which read:

We, the undersigned, having assessed the relevant scientific evidence, do not find convincing support for the hypothesis that human emissions of carbon dioxide are causing, or will in the foreseeable future cause, dangerous global warming.

Stewart Franks testified with Robert Carter before a Select Committee on Climate Policy in the Australian Parliament.

Franks’ opening argument was against climate policies in general, stating that “our climate policies here in the west are already killing people and climate change has never been shown to have killed a single person.”

The full document can be viewed here, but below are some notable exerpts: [3]

Senator CAMERON — … Seriously, put yourself in the position where you have to make a decision about what to do about the argument for global warming. There seems to be from my perspective a consensus of scientific view—if I can put it as high as that—that global warming is taking place and all of these problems arise, icecaps melting, global warming, all the issues, and on the other hand you come and say it is rubbish, this is not a problem we need to worry about and that we should not spend a cent on it. What if you are wrong? Can politicians be totally adequately comfortable in your position? That is the dilemma we have.

Prof. Franks —I was asked to come here to speak on the issue of the science of climate change. I am not a politician. The Labor Party, and I guess the Greens, brought it as a policy to the election and the electorate voted. They are concerned, rightly or wrongly.

Senator CAMERON —That is not the question. I am asking you if your science is wrong—

Prof. Carter —It is not a matter—

Senator CAMERON —Wait a minute Professor Carter. You can answer the question in a second. If your science is wrong and the consensus of scientific view is correct and government does nothing, what is the implication?

Prof. Franks —I would feel really rather bad about it. But I think I would be first one to put my hand up and say that I got it wrong. What would be the implications? They would be that it would be getting warmer, presumably.

The Senators also question Robert Carter about his association with the Institute of Public Affairs (IPA), an organization that supports Australian climate change skeptics and which receives funding from large corporations such as Western Mining Corporation, and oil companies including Esso Australia:

Senator CAMERON —Professor Carter, you criticize some other scientists for being political, but you are not apolitical are you? You are a member of the Institute of Public Affairs and you write regularly for them, do not you?

Prof. Carter —You have to make your judgement on that, Senator Cameron. I cannot really look at myself. I cannot imagine a more unpolitical animal than me. I am a scientist.

Senator CAMERON —Are you a member of the Institute of Public Affairs.

Prof. Carter —The Institute of Public Affairs is a fine public think tank, and I am proud to be associated with them.

Senator CAMERON —That is good; that is fine. On one hand you both say this is all rubbish.

Prof. Carter —With respect, I did not say that Senator Cameron.

Prof. Franks —That was me.

One of Franks’ arguments is that the IPCC ignores feedback due to clouds. This argument is one of many debunked by SkepticalScience, which states that net cloud feedback may actually be positive rather than negative [7]:

Prof. Franks —It is worth pointing out that the CO2 forcing in the IPCC models is only the start of their chain of disaster. It is actually the qualitative feedback with the clouds that generates the extreme disasters of runaway climate. It is not CO2 at all; it is a knock-on consequence. That has no empirical or scientific justification whatsoever. They could very much easily have built in negative feedback and found that the warming was actually reduced.

Prof. Franks —Exactly. Because of the cloud feedback. There is no scientific evidence. We do not actually monitor what is the most important parameter for this planet; this is, its reflectivity—its albedo. We do not even measure that. A very small changed in the planetary albeit it would completely swamp any additional forcing by CO2 and we do not even measure it. How can we say CO2 is a scientifically proven theory of disastrous climate change? We cannot. We can be concerned about the future, but until it shows itself demonstrably there is no empirical evidence of CO2 leading to this runaway climate change.

Senator CAMERON —It is a bit like asbestos-related cancer. Wait until it appears. The scientists argued that asbestos would not hurt you.

Prof. Franks —Would you have banned it before it killed anyone?

Senator CAMERON —If we had known.

Prof. Franks —You have to have some negative consequences.

Prof. Franks —I have no argument that every scientist is good. Quite the reverse. I am here to argue that they are advocates for CO2.

Stewart Franks has said that he has never received any funding from any industry, both in a major newspaper and on National TV. [8], [4]

“At present, none. I have taken over a new role as Dean of Students, so my research is down to two days a week now. But I previously received funding from Macquarie Generation, which is responsible for about 45 per cent of New South Wales’ CO2 emissions. I would like, if I may, to qualify that. No funding from that went to me; it went to employ my rather wayward PhD student to do a post doctoral study while he was still writing up his PhD. […] I have had many other industry sponsors, including the Sydney Catchment Authority.” (Emphasis Added)

Stewart Franks gave a presentation to a meeting of the Australian climate sceptic Lavoisier Group.

He said these articles were in relation to “the land surface boundary and how it is represented in global climate models, in relation to multi-decadal climate variability, paleo studies of El NiÃ±o and La NiÃ±a activity over the last 1,000 years. You name it, I have pretty much done it.” [3]

Franks was a co-author of Taxing Air: Facts & Falacies About Climate Change, released in May 2013. The two key authors of the book were geologist Bob Carter and newspaper cartoonist John Spooner. Fellow climate sceptics Bill Kininmonth, Martin Feil and Bryan Leyland were also authors. The Institute of Public Affairs sent copies of the book to Australian Members of Parliament and hosted a launch event.

Australian mathematical physicist Ian Enting, author of the Australian Mathematical Scences Institute book Twisted: The distorted mathematics of greenhouse denial, has analysed the book, describing it as being characterised by “half-truths and slanted misrepresentation” and “appalling hypocrisy”.

Franks provides a list of publications in his CV.