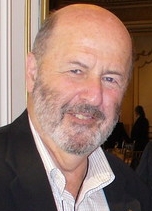 Thomas Wysmuller is the owner of Colderside.com which he describes as part of the “Public Policy industry.” He gives regular speeches on “The Colder Side of Global Warming.”

Wysmuller has worked as a meteorologist for the Royal Dutch Weather Bureau in Amsterdam and was an intern at NASA. [2]

“There has been a stunning disconnect involving land temperatures globally and CO2, whether man-made or naturally sourced.  The oceans continue to warm, while the surface record flatlines. […] It is obvious that the surface records are NOT going up – they are basically in a 0.2C flatline […]” [3]

“If CO2 is to be considered a major driver of temperatures, it is doing a counterintuitive dance around the numbers.” [3]

Wysmuller signed the “Realist Catholic Climate Declaration,” drafted by Heartland Institute policy analyst William Briggs, which stated, “the earth’s climate has always changed, is changing now, and will never cease changing. The extent to which man is responsible for climate change is not known, only surmised. There is no earthly force capable of stopping climate change,” and that, “the salvation of souls is of more pressing concern than the air temperature. Pray to God and pray for your neighbor, not to the planet.” [29], [30]

The declaration was endorsed by Anthony Watts’ blog Watts Up With That, in a post by Charles Rotter, which stated, “please share this as widely as possible. With the concept of ‘eco-sins’ being bruited, and the return of paganism, this declaration is timely and important.” [31]

According to a post at William Briggs’s website: “This statement is to be in contradistinction to the hyperbolic and inaccurate ‘U.S. Catholic Climate Declaration’,” Briggs wrote of the draft. “The goal is to have something short, sweet, certain, and Catholic.” [32]

The European Institute for Climate and Energy (EIKE) promoted the event on its website to “set facts against CO2 hysteria and climate activism.” [27]

Germany’s AfD accelerated its promotion of climate change denial since the emergence of Swedish activist Greta Thunberg in August 2018. A smear campaign against Thunberg mocked her autism as a form of “psychosis” and compared her to a cult leader and a member of a Nazi youth organization. AfD attributed Thunberg’s popularity to the work of “PRprofessionals seeking to bedevil the plant-nutrient carbon dioxide.” [26], [28]

Speaking to the Guardian, a representative of Greenpeace Germany said of the event:

“The AfD is using the Bundestag as a stage for its dissemination of climate lies. They invite fake experts to a so-called symposium on climate change to generate content for mass dissemination via social media channels and stir up hatred and anger on the internet. We are experiencing a shift to the right on social media and in society. In a short period of time, the new right has established its own counter-society on climate issues. With troll armies, agitating magazines and the support of climate skeptics like EIKE, it has created its own sphere that is massively underestimated.” [26]

Wysmuller was listed on the program for the 12th conference of the European Institute for Climate and Energy (EIKE), also billed as the Heartland Institute‘s 13th International Conference on Climate Change (ICCC13). According to a translation of the agenda, he spoke alongside Nils-Axel Morner on “The Kattegat and the Baltic as test areas for absolute sea-level changes” on November 23. [25]

In January 2018, more than 200 scientists endorsed an open letter calling on the American Museum of Natural History (AMNH) to remove climate change denier Rebekah Mercer from its board and to “end ties to anti-science propagandists and funders of climate science misinformation.” The New York Times reported that those among the AMNH letter calling for Mercer to step down were Michael E. Mann, director of the Earth System Science Center at Pennsylvania State University, and Katharine Hayhoe, director of the Climate Science Center at Texas Tech University. [22]

Wysmuller was among a group of climate change deniers who responded with their own open letter, calling for the AMNH “not to cave in to this pressure.” The letter was signed by numerous individuals with ties to groups funded by the Mercer Family Foundation such as Will Happer of the CO2 CoalitionRichard Lindzen, a fellow at the Cato InstituteCraig Idso, the chairman of the Center for the Study of Carbon Dioxide and Global Change. There are a number of signatories affiliated with the Heartland Institute, which has received over $5.78 million from the Mercer Family Foundation since 2008. [23]

Thomas Wysmuller was a presenter at the “4th World Conference on Climate Change” in Rome. [18]

A DeSmog investigation of the conference found that the event had been hijacked by climate science deniers who had previously called for climate scientists to be investigated for fraud. The conference was organized by ConferenceSeries, also known as OMICS, which promotes hundreds of meetings around the world. [19]

The U.S. government’s Federal Trade Commission launched a court action against the group in August 2016 that alleged deceptive marketing practices. Nils-Axel Morner is listed as one of the Chairs/Co-chairs of the conference, and also helped organize another climate change denial conference in London in September 2016. [20], [21]

After being contacted by DeSmog, several presenters said that their names “should not be on the program” of the conference in Italy. OMICS, who was also contacted, said it would “investigate” the line-up for its conference and if it found “unnecessary science,” it would contact attendees to inform them “about the real faces of those who are looking to make a platform for spreading the nonsense through our forum.” [18]

On the conference program, Wysmuller was listed as affiliated with “NASA TRCS Climate Group,” which DeSmog‘s Graham Readfearn noted “ could be easily mistaken as a legitimate group at the U.S. space agency,” but rather is a group of retired NASA employees who deny the existence of man-made climate change. [18]

Wysmuller was a signatory of a petition (PDF) organized by Richard Lindzen of the Cato Institute urging President Donald Trump to pull the United States out of the United Nations international convention on climate change (UNFCCC). [16]

“In just a few weeks, more than 300 eminent scientists and other qualified individuals from around the world have signed the petition below,” Lindzen wrote in the letter. [16]

DeSmog investigated the list, and found that only a small handful of the signatories could be considered “even remotely ‘qualified’ or ‘eminent’ — but not in the field of climate science.” The list included individuals “interested in climate,” and one signatory who only identified as an “emailer who wished to sign the petition” while some signers provided no affiliation or address whatsoever. [17]

Thomas Wysmuller was a signatory to a Cornwall Alliance open letter supporting Scott Pruitt for EPA Administrator under the Trump administration. [13]

Pruitt was further grilled on his fossil fuel ties at his confirmation hearing on January 18. [15]

Thomas Wysmuller was a speaker on Panel 13: “The Right Climate Stuff,” at the Heartland Institute’s Tenth International Conference on Climate Change (ICCC10) in Washington, D.C., with Hal Doiron and Walter Cunningham. [11]

Thomas Wysmuller was a speaker at the Heartland Institute’s Ninth International Conference on Climate Change (ICCC9) in Las Vegas, Nevada. [9] His speech, titled “Tide Gauges/Satellites; Different Measures – Same Ocean! Will the REAL Sea-Level Please Rise???” can be viewed below.

On March 15, 2013, Thomas Wysmuller, alongside Walter Cunningham, Harold Doiron, and Heartland President Joseph Bast spoke at a panel discussion where they explain “why they are urging government agencies to cease their ‘unbridled advocacy’ of Anthropogenic Global Warming & Return Integrity to the Scientific Method.” [10]

In January 2013, TRCS issued a summary of its findings as follows (according to a press release issued by The Heartland Institute):

Wysmuller was a speaker at the Heartland Institute’s Seventh International Conference on Climate Change (ICCC7). A Heartland press release implies that he was a “Former NASA scientist,” although according to his website, his highest position was as an intern. [4] He spoke on the Nasa Letter Writers Panel, along with Harrison Schmitt, Harold Doiron, Walter Cunningham, and Leighton Steward. Video footage can be viewed below.

Wysmuller was one of 49 former “NASA scientists” to sign an open letter to NASA and the Goddard Institute for Space Studies (GISS) to cease they describe as “unbridled advocacy of CO2 being the major cause of climate change.” [5]

“We believe the claims by NASA and GISS, that man-made carbon dioxide is having a catastrophic impact on global climate change are not substantiated,” the letter stated.

SkepticalScience published a critique of the letter which was republished in The Guardian. [6], [7]

According to a search of Google Scholar, Thomas Wysmuller has not published any articles in peer-reviewed journals on any subject.