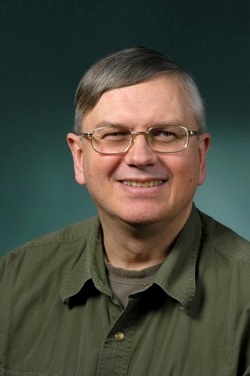 Tom Segalstad is an associate professor of Resource and Environmental Geology at the University of Oslo and head of the University’s Geological Museum. [2]

He has listed himself as an “Expert Reviewer” of the IPCC, which he has also mentioned at a media interview during the Heartland Institute’s International Conference on Climate Change.

Under his research interests he lists “CO2 and the ‘Greenhouse Effect,’ and to be more specific, “how CO2 simply cannot cause ‘global warming’.” [3]

“Man’s contribution to atmospheric CO2 from the burning of fossil fuels is small, maximum 4% found by carbon isotope mass balance calculations. The ‘Greenhouse Effect’ of this contribution is small and well within natural climatic variability […] The global climate is primarily governed by the enormous heat energy stored in the oceans and the latent heat of melting of the ice caps, not by the small amount of heat that can be absorbed in atmospheric CO2CO2 taxes’ to be paid by the public cannot influence on the sea level and the global climate.” [4]

Tom Segalstad was a signatory of a petition (PDF) organized by Richard Lindzen of the Cato Institute urging President Donald Trump to pull the United States out of the United Nations international convention on climate change (UNFCCC). [10]

“In just a few weeks, more than 300 eminent scientists and other qualified individuals from around the world have signed the petition below,” Lindzen wrote in the letter. [10]

Segalstad was a speaker at the Heartland Institute‘s 7th International Conference on Climate Change (ICCC7).

Segalstad’s presentation, titled “Geochemistry of Carbon Dioxide: the whereabouts of carbon dioxide on Earth” can be viewed below.

Segalstad spoke at the Heartland Institute‘s Second International Conference on Climate Change (ICCC2). His presentation, titled “Geochemistry of Carbon Dioxide, the whereabouts of Carbon Dioxide on Earth” can be viewed below.

Segalstad spoke at the Heartland Institute‘s Second International Conference on Climate Change. He was interviewed by The New American during the conference where he contended that ice core samples are not representative of global Co2 levels. [5], [6]

His presentation, titled  “Carbon Isotope Mass Balance Modeling of Atmospheric vs. Oceanic CO2” can be viewed below.

During the interview, Segalstad mentions that he was a “expert reviewer to the IPCC,” and that he had asked why his scientific paper (PDF) was not included in the report. When asked further about the IPCC, Segalstad said he “was not that close to the core of the IPCC.”

Was one of a list of “Commentors” to submit a document to the EPA titled “A Scientific Challenge of EPA‘s Proposed Finding of Endangerment that CO2, Methane, Nitrous OXide, Hydrofluorocarbons, Perflouorocarbons, and Sulfur Hexafluoride, Collectively on Individually, Are Causal Agent(s) or Contributors of Climate Change” (PDF).

The commentors conclude that “[…] there is no ’cause and effect’ relationship between CO2 and GTA [Global Temperature Anomalies].”

Similar petitions (PDF) were released by the Southeastern Legal Foundation targeting the EPA’s Endangerment Finding, with one (PDF) citing Segalstad as a source. The EPA Responded to Southeastern Legal, stating that “Segalstad’s work ‘does not address the lifetime of a change in atmospheric concentration of CO2, but rather the lifetime in the atmosphere of an individual molecule of CO2‘ and that these ‘are two different concepts’.”

Southeastern Legal lists its partners in their effort to reverse the EPA endangerment finding as the Science & Public Policy Institute, as well as “like-minded organizations” such as the Competitive Enterprise Institute, Heritage Foundation, CATO Institute, and the Independent Women’s Forum, among others.

Segalstad is listed as a signatory to the Manhattan Declaration on Climate Change that was first introduced at the Heartland Institute’s 2008 International Conference on Climate Change. [7]

The Manhattan Declaration asserts that “human-caused climate change is not a global crisis,” that “(CO2) is not a pollutant but rather a necessity for all life,” that industrial carbon dioxide emissions do not affect climate change, and that “warmer weather is generally less harmful to life on Earth than colder.”

Segalstad’s name appears on a submission (PDF) from the Lavoisier Group to the Garnaut Climate Change Review.

The letter states that “The argument put forward by protagonists for decarbonization that there is a scientific ‘consensus’ behind theories of a climate controlled by atmospheric carbon dioxide is clearly an attempt to silence critics, and should be treated with contempt.”

His name also appeared on the original letter to UN Secretary-General Ban Ki-Moon that argued the science was not settled on climate change. [8]

A search of Current Research Information SysTem In Norway (Cristin) comes up numerous publications by Tom Seglstad on the subject of climate. Note that this list includes newspaper articles and journals that may not have been subjected to peer review.

Other Publications and Public Appearances