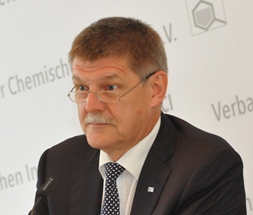 Dr. Utz Tillmann is the General Manager/CEO of the Union of Chemical Industries, or the Verband der Chemischen Industrie (VCI) in Germany. He was appointed as chief executive on June 1, 2008. [2]

Tillmann’s background is in biology where he achieved his degrees and a PhD. He began his professional career in 1985 as the head of the laboratory at the Institute for Heavy Ion Research in Düsseldorf and as a research assistant at the Technical University of Darmstadt.

He later moved to BASF in Ludwigshafen, the largest chemical company in Europe. From January 2001 to March 2004, he was seconded for three years to Cefic (the European Chemical Industry Council) as Executive Director of their Environmental Policy Department. When he returned to his company, he became Senior Vice President until 2006. He was in charge of public affairs concerning the environment.

Tillman appears to recognize that climate change is an issue, although he also points to the benefits of the chemical industry in climate protection: “We have reduced our own emissions by nearly half since 1990. Many of our products are also indispensable for effective climate protection,” he said in a VCI press release. [3]

“[T]he issue of climate change for the Germans have lost none of its relevance. This gives our long-standing demand for an effective global climate agreement emphasizes once. The policy must be the World Climate Summit in Durban to use the playing field and increase the participation of developing countries.” [3]

Utz Tillmann was a speaker (PDF) at the Eighth International Conference on Climate Change (ICCC-8)/Fifth International Conference on Climate and Energy (ICCE-5) sponsored by both the Heartland Institute and the European Institute for Climate and Energy (EIKE). Tillmann’s speech covers “The implications of Germany’s new Energy Concept for Germany’s Industry.” [4]

Utz Tillmann appears to have written a number of articles on economics. A sample is available here. He does not appear to have published peer-reviewed articles on any other subject.