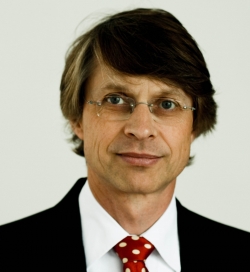 Wolfgang Müller is the General Secretary of the German climate skeptic organization EIKE, or The European Institute for Climate and Energy (Europäisches Institut für Klima und Energie). Müller is also listed (PDF) as a “Senior Advisor” to the climate change programme of the Committee for a Constructive Tomorrow (CFACT), and is a board member and Executive Director of the libertarian Berlin Manhattan Institute (formerly the Institut für Unternehmerische Freiheit). [2], [3], [4], [5]

“The real science and economics of climate change support the view that global warming is not a crisis and that immediate action to reduce emissions is not necessary.” [6]

“On top of the incredible obstacles already faced by disadvantaged peoples and free enterprise businesses across the developing world, efforts to raise living standards of millions living in poverty are now being undermined by radical scare tactics deployed by Green NGOs. Collectively, this ‘green’ smear machine funnels millions of dollars into dubious campaigns and lobbying efforts that ultimately lead to unnecessary human suffering and stifled economic growth.

“Under the veneer of promoting environmental stewardship, ‘green’ pressure groups have dominated the European public policy debate on climate change, agriculture and forestry.  In the name of nature for decades they exerted massive pressures on political actors and businesses. The effects of this dubious lobbying have spilled beyond the EU‘s borders, now dictating development policies in emerging economies.” [7]

Müller participated in a live-streamed Heartland Institute media event in Katowice, Poland scheduled to coincide with the 24th UN Conference of the Parties (COP-24). [20]

Heartland’s report was touted as a summary for policymakers, and featured a section on the benefits of fossil fuels to human prosperity, health, and the environment. Heartland claims that their data proves that “humans are not causing a climate crisis.” [20]

Video of the presentation, including Müller’s remarks beginning at 01:20:55, can be viewed on Heartland’s YouTube page:

Müller was listed on the program for the 12th conference of the European Institute for Climate and Energy (EIKE), also billed as the Heartland Institute‘s 13th International Conference on Climate Change (ICCC13). According to a translation of the agenda, gave the closing speeh on November 24. [19]

Wolfgang Müller appeared at the United Nation’s Conference on Climate Change, COP21, in Paris, France with the Heartland Institute, the Committee for a Constructive Tomorrow (CFACT), and the Competitive Enterprise Institute (CEI) to “hold a ‘counter-conference’ … called the Day of Examining the Data.” [16] Other notable climate science deniers that were in attendance at the “counter-conference,” included: Robert Carter, Willie Soon, Christopher Essex, James Taylor, Patrick Moore, S. Fred Singer, James Inhofe, and Christopher Monckton. [17]

Wolfgang Müller introduced EIKE‘s Fourth International Climate and Energy Conference in Munich. He described the Munich conference as being an “objective, scientific criticism of the IPCC.” [2]

Wolfgang Müller introduced a briefing hosted by CFACT and EIKE which featured  presentations that “build upon the analysis of Professor S. Fred Singer and provide information on the geological record, solar activity and the big question — is our climate governed by man or nature?” [9]

“Our ‘Green Freedom’ campaign seeks to counter the baseless claims made by the well-funded Green Movement, to point out the damage done by these policies to people at home and around the world, and to promote a balanced approach to environmental issues based on sound research and science rather than propaganda,” Müller said. [7]

Wolfgang Müller took part in the welcoming presentation for the “International Climate Conference – Climate Change Reconsidered” in Berlin. The purpose of the conference was to “point out the fact that the scientific debate is not over [on climate change].”

Müller argues that the “emerging consensus view of scientists outside the IPCC” is that “global warming is not a crisis and that immediate action to reduce emissions is not necessary.” [6]

The conference was a collaboration of the European Institute for Climate and Energy (EIKE), Committee for a Constructive Tomorrow (CFACT), Haus der Zukunft (HdZ), the Liberale Institute of the Stiftung für die Freiheit and Bund Freiheit der Wissenschaft.

Numerous well-known climate change skeptics spoke at the event including:

Müller was a signatory to an open letter to Chancellor Dr. Angela Merkel which implored her to “abandon the pseudo-religion of anthropogenic warming.” [1]

Wolfgang Müller does not appear to have published any peer-reviewed articles in the area of climate change.