David Bellamy Gets It Completely Wrong on Climate Change Science

There’s another strong contender for the Christopher Booker Prize for Bullshit Reportage of Climate Science.

The latest challenger is David Bellamy, a former BBC broadcaster who has been holding forth on his rather hostile views on climate science.

In a video interview with a British newspaper, he calls peer-reviewed journals as “the last thing I would use now.”

If Bellamy has indeed written off the entire scientific community, where is he getting his information to back up his remarkable claims that carbon emissions are not driving climate change?

Hard to say… George Monbiot does an admirable job of trying to unravel Bellamy’s convoluted arguments in an article last week. Let’s try and follow the faint trail of breadcrumbs dropped by the UK’s leading climate change denier.

Among other things, Bellamy maintains that a much warmer climate 2,000 years ago allowed Romans to produce “very very good red wine up in the Scottish borders.”

True? Ah…no. Here is a map of the extent of historical wine production in the UK including both the Roman and Medieval periods, published by Richard Selley, author of The Winelands of Britain. 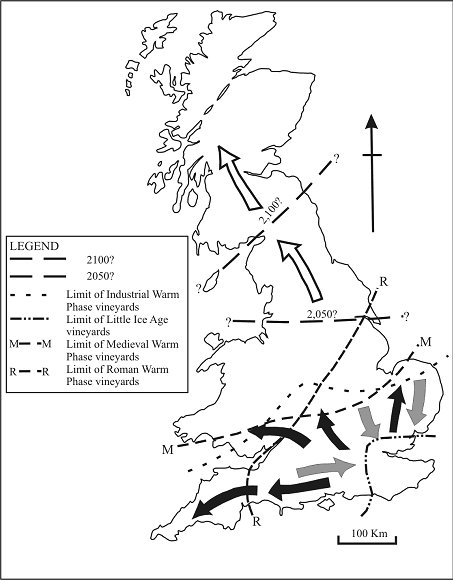 The good news (if you can call it that) is that Scotland may be promising vineyard habitat by the end of the century due to ballooning emissions of fossil fuels.

The “fine wine” argument instead buttresses the already colossal amount of evidence that the kind of climate change we are now witnessing eclipses anything seen in the historical record.

Bellamy also contends that the famous graph produced by Dr. Michael Mann had been “taken apart and proven to be a fiddle” – a charming turn of phrase but of course entirely wrong.

The so-called “hockey stick” graph has been recalculated several times using updated data and always shows the same thing: that the climate we are experiencing now is warmer that anything in recorded history. According to the US National Academies of Science assessment of this “controversy”:

The basic conclusion of Mann et al. (1998,1999) was that the late 20th century warmth in the Northern Hemisphere was unprecedented during at least the last 1,000 years. This conclusion has subsequently been supported by an array of evidence that includes both additional large-scale surface temperature reconstructions and pronounced changes in a variety of local proxy indicators, such as melting on icecaps and the retreat of glaciers around the world, which in many cases appear to be unprecedented during at least the last 2,000 years.

Bellamy may instead be referring to a fraudulent graph produced by a German high school teacher that was cribbed from an early draft by the IPCC way back in 1900. This cut and paste fakery involved phony temperature scales, extended timelines and amusing claims that the fake graph was correct and the entire IPCC process was wrong. It was also promoted to many schools in Germany.

Bellamy also repeats a favorite refrain of climate deniers that the ice core data shows a lag between temperature increases and CO2 increases. According to him, this indicates the link between CO2 and temperature is all a bunch of hooey.

First of all, ice core data from Greenland and Antarctica dating back many hundreds of thousands of years shows that global temperatures move in lock step with atmospheric CO2 concentrations. Obviously, there is a very strong link between the two.

Secondly, scientists are not maintaining that ancient increases in temperature were initiated by increasing CO2.

For one thing, mastodons or our ancient primate ancestors did not drive cars or excavate and burn massive amounts of coal – that is something we are doing for the first time in geologic history. Prehistoric temperature increases were instead started by changes in the Sun’s output or the Earth’s orbit, and then amplified up to five times by the release of carbon in positive feedbacks like melting permafrost or CO2 release from warming oceans.

Third, this extensive ice core record is not something we should take comfort from. We are already seeing evidence of dangerous positive feedbacks which may lead to runaway climate change, whether we in the future decide to drastically reduce CO2 emissions or not. Once we start the train moving, it may pick up speed up even as we try and put on the brakes.

Speaking of ice, Bellamy also claimed in a letter to the New Scientist in 2005 that many of the world’s glaciers “are not shrinking but in fact are growing … 555 of all the 625 glaciers under observation by the World Glacier Monitoring Service in Zurich, Switzerland, have been growing since 1980”

His nemesis George Monbiot took the time to contact World Glacier Monitoring Service and read them Bellamy’s letter. Their response? “This is complete bullshit…Despite his scientific reputation, he makes all the mistakes that are possible.”

It gets worse. Turns out that Bellamy’s “source” likely originated from a website hosted by none other than S. Fred Singer. This professional denier who has worked on behalf of the CFC, tobacco, and oil industries was ostensibly citing a “paper published in Science in 1989”, stating that 55% of glaciers were growing.

Monbiot tried to find such a paper but it does not exist. This phony claim about growing graciers has been making the rounds on the internet for years and was finally put to bed by Desmog Blog last July.

It also turns out that Bellamy apparently meant to type “55%” but missed the shift key and got 555 instead. Bellamy later admitted to a “glitch of the electronics” regarding his letter to the New Scientist, yet never requested a correction be published.

So much for the robust case against climate science.