The climate denial echo chamber is again in high gear trying to assassinate the character of respected scientist Michael Mann of Penn State. Their latest ruse is to squawk that Dr. Mann is the indirect recipient of federal stimulus dollars.

That is not at all surprising since last year $3 billion in federal stimulus funds was provided to the National Science Foundation in addition to their normal budget of about $6 billion. That means that about one third of all research grants from the NSF nation-wide benefited from stimulus money.

Lets drill a little deeper into this smear campaign. Penn State and the University of Hawaii both shared a grant of $770,000 for a research project called “Improved Projections of the Climate Response to Anthropogenic Forcing: Combining Paleoclimate Proxy and Instrumental Observations with an Earth System Model”.

You would never know that of course reading the tripe being trotted out by carbon cheerleaders of the world. The charmingly titled website Frisk-a-Liberal.com thundered that “a half a million dollar grant awarded to Penn State Professor Michael Mann.” How they arrived at this $450,000 error is unknown – it is puzzling when such free market capitalists clearly can’t operate a calculator…

The National Center for Public Policy Research chimed in, demanding that the funding be returned to the US taxpayer. “It’s shocking that taxpayer money is being used to support a researcher who seemingly showed little regard to the basic tenets of science – a dispassionate search for the truth,” said Tom Borelli.

Since Mr. Borelli brought up funding, who is paying his salary? ExxonMobil has granted the NCPPR at least $100,000 since 2002, including $30,000 for their ‘global climate change/EnviroTruth website.

It’s also interesting that Borelli mentioned the principle of “dispassionate search for truth” in science. 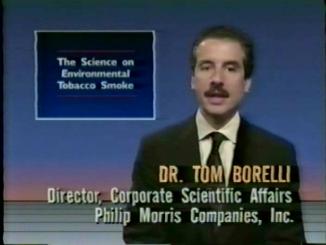 That personal conviction must have served him well when he was the manager of Philip Morris Corporate Scientific Affairs Department in the 1990’s.

Last year, the Canadian Medical Association Journal reported that Imperial Tobacco in 1992 destroyed dozens of internal research documents (including those related to second hand smoke) “that could expose the company to liability or embarrassment.”

The tobacco industry and their representatives are hardly renowned as a bastion of dispassionate scientific inquiry.

Yet many of these are the same people that presumed to question the science behind the so-called “hockey stick” graph published by Mann and others in the journal Nature in 1998.

Besides being published in the most respected scientific journal in the world, this research was later assessed and exonerated by the National Research Council. However it seems that some interests have little interest in the truth, instead relying on repetition rather than reality.

And who were the main critics of this research? Steve McIntyre, who holds a bachelor’s degree in mathematics and spent his career in the mining and petroleum industries, and Congressman Joe Barton who accepted $834,386 from oil companies between 2000 and 2007, and another $121,050 from the coal industry.

But as I often ask, what does money have to do with anything?

It seems that in addition to impeccable scientific credentials, climate researchers must now also possess the hide of a rhino in order to endure public attacks like this, from the likes of Borelli.