Lorne Gunther: Denial (and dumb analogies) are us

In a wonderfully silly update of the (Canadian newspaper the) National Post’s campaign of climate change denial, columnist Lorne Gunther (picked up here in the Edmonton Journal) argues that global warming has ended – and to prove it, he imagines the earth as an out-of-control Toyota which he decides has run out of gas.

What good fortune that might be (running out of gas in time to stop before you hit the cliff). But how can we think that our careering planetary heating system – which appears to have it its top speed and has been holding steady for more than a decade – is “out of gas” when we’re pumping the stuff into the atmosphere at an unprecedented rate?

Look, for example, at the graph to the right. This is a fuel guage for atmospheric CO2: we’re not running out; we’re topping up.

So, given that rudimentary physics demonstrates CO2 to be a greenhouse gas (which has the effect of holding on to more of the sun’s radiative energy) and given that, by burning fossil fuels and cutting down trees, we are pouring more CO2 into the atmosphere every year, the best scientists in the world have postulated that global average temperatures will likely rise as a result.

And whadaya know: global average temperatures have indeed been rising (per the graph below). The climb hasn’t been quite as steady as the increase in CO2 because, as Gunther might agree, climate is complicated. For example, we also have to consider the influence of the sun, which was raging along in the latter part of the 20th century but has (again as Gunther notes) hit an unusually dead spot lately. 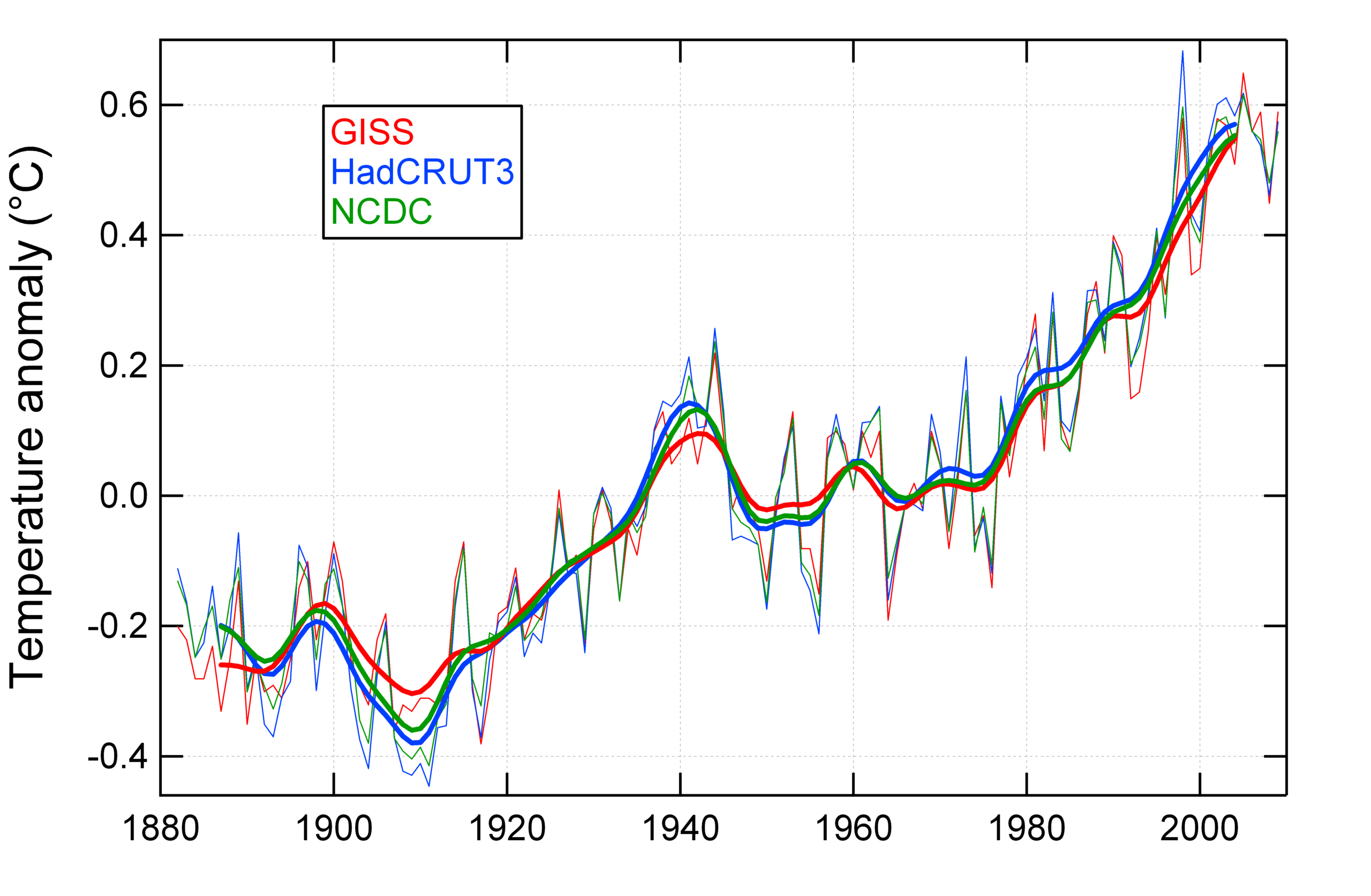 Now, I know that the people who wish warming weren’t real – or could be blamed on something else so we fossil fuel consumers could keep on keeping on – will reiterate Gunther’s goofy argument that warming seems to have stalled. Regardless that nine of the hottest 10 years in recorded history have occurred since 2000, they want to believe that our Toyota is slowing safely, despite the stuck accelerator.

But I invite you all to have a quick read of Bart Verheggen’s great post on this issue. In addition to having pulled together clearer images of the graph at left, he has illustrated exactly how such graphs have been used to misrepresent the science.

Then, before you get back behind the wheel of Gunther’s imagined auto, consider this: knowing that the accelerator is sticky, is it prudent to keep your foot on the gas? Or would it be smarter to take the car in for a check-up – and not with a journalist or a gasoline salesman, but with someone who actually knows something about cars?

If you choose the first option, please honk before you get behind the wheel. It will help the rest of us recognize that you are part of the problem.