Sometimes watching YouTube videos is a lot like eating your favorite flavor of chip, fudge, or whatever else it is that has you yearning for more.

You watch one video and then, on that panel on the right hand side, up pops a whole load of others that YouTube thinks you’ll like.

And so it was that I failed to resist a video entitled Senator Malcolm Roberts — How Climate Actually Works (presumably there’s another video somewhere called President Trump — How Uranium Actually Works.)

Roberts was being interviewed at length by David Pellowe. Honestly, I don’t know much about Pellowe, but he did run as a candidate for the Christian conservative Family First party in the Queensland state election in 2015.

His online media effort — called Church and State — says it wants to “rebuild the strong Judeo-Christian values — the foundations of our nation — to their proper place in Australian society.” Pellowe is trying to grow an audience but, for whatever reason, not many people seem to be paying much attention.

But I paid a bit more attention to Pellowe’s interview than others because he’s based in the same city as me and he was interviewing Senator Malcolm Roberts, the Queensland Senator for One Nation. I found the whole thing instructive.

Not because Roberts was wrong about something (this happens all the time when he talks about climate change) but rather, Pellowe’s willingness to accept what Roberts told him and then provide a forum for it. Pellowe’s videos then become part of that morass of climate science denial videos on YouTube that help confuse people about climate change.

I’m just picking here on one small segment of the interview, but I have watched the rest of it (and the others in the series) and it consists of Roberts’ usual cooked-up conspiracy theories about world governments and the United Nations. The whole thing is heavily spiced with hubris and conceit.

Pellowe first makes an appeal, saying his aim is “empowering viewers to be better informed and better involved.” “We want to talk about the data, the facts and the evidence,” says Pellowe. “I love this … OK,” mutters Roberts. Then later, Roberts says this:

Right. So let’s deal with this. There are a bunch of reasons why the Australia Bureau of Meteorology’s (BoM) high-quality dataset starts in 1910 and they that have nothing to do with the conspiracy that people like Roberts and Jennifer Marohasy of the Institute of Public Affairs like to hint at. You know — hide the data because it doesn’t fit the narrative.

As the BoM explains, around 1910 is when the number of temperature monitoring stations had reached critical mass in Australia. That’s the point when you can start to reliably build a picture of what was going on with temperatures across the continent.

In other words, by 1910 there were enough temperature stations that were widely spread and of sufficient quality containing standardized equipment. But there is data available for individual areas that go back much further. Contrary to what some might have you believe, the bureau does not hide this data and it has not deleted it. It’s on the website.

But here, for those interested, is what that data looks like. It’s called ACORN — the Australia Climate Observations Network. 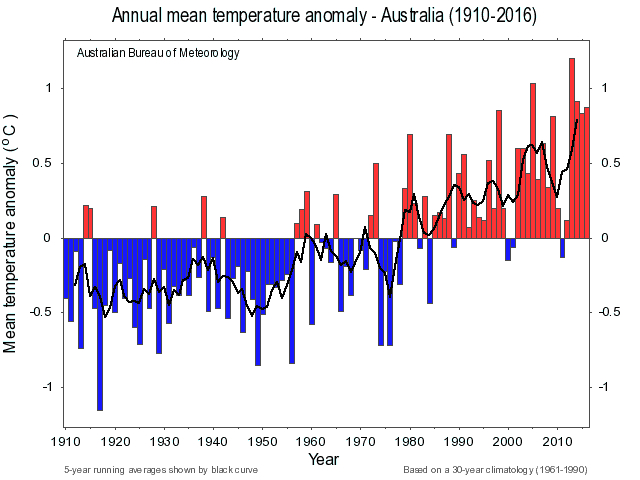 A chart from the Bureau of Meteorology showing annual temperatures across the continent since 1910, using the ACORN–SAT dataset.

But what about those earlier temperatures? A team of climate scientists and researchers at the Berkeley Earth project took all the data available for Australia to do their own reconstruction of average land temperatures going as far back as the 1850s.

Was it warmer in the late 19th century than it is today, as Roberts claimed the data clearly shows? 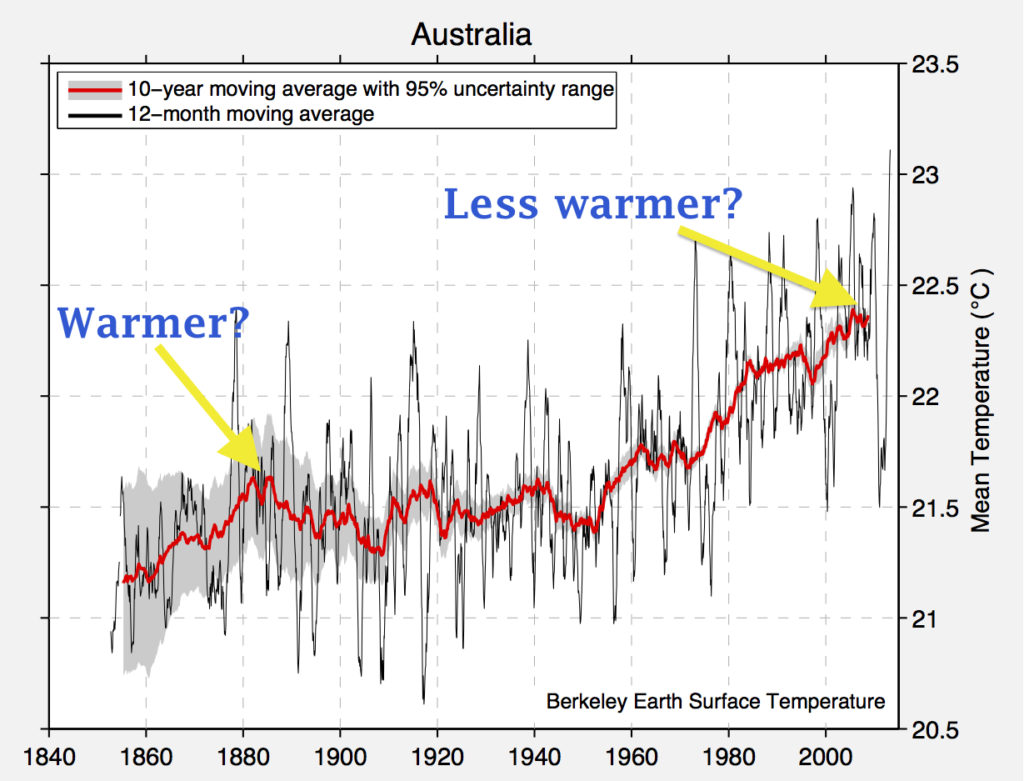 A Berkeley Earth reconstruction of temperatures across Australia since the late 19th century.

But Roberts didn’t only confine his wrongness to Australia. He also had a thoroughly successful crack at being entirely wrong about the United States too. In late 2016, Roberts was in Washington, D.C. for a meeting with a conga-line of climate science deniers, including members of President Trump’s transition teams. 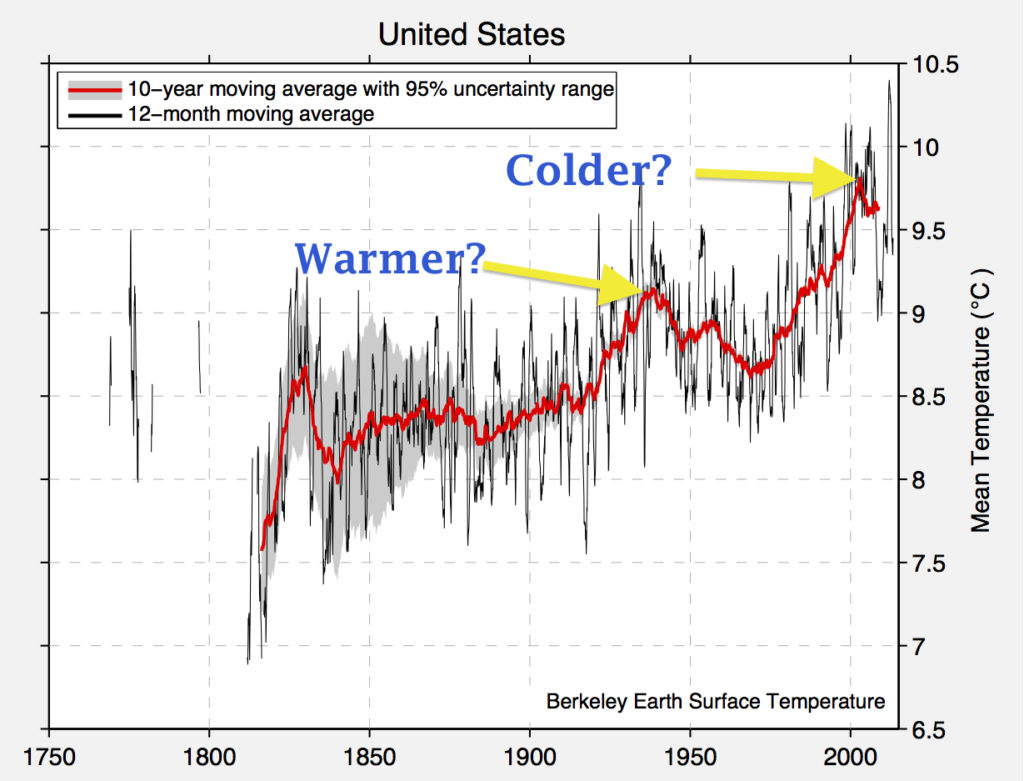 A Berkeley Earth reconstruction of temperatures across the United States since the 1850s.

Roberts also claims that the “longest temperature trend” on the recent global record was between the 1940s and 1970s and suggests something is wrong because this also coincided with a rise in emissions of CO2 from industrial activities. This is a very old talking point that’s used by deniers like Roberts to mislead people. So I’ll point to a very old explanation of this myth in New Scientist, from 2007.

But in short, that post-war industrial boom also coincided with an awful lot of particulate pollution and some volcanic eruptions that helped to keep temperatures lower.

The problem here is that it’s easy to get distracted by claims about average temperatures, when the aspects of climate change that actually impact people, flora, and fauna are things like the temperature extremes, the rising sea levels, the risk of losing coastal cities, and the trillions of dollars in assets and the billions of people currently on these coastlines.

The other problem here, too, is that Senator Roberts has a platform and resources. He goes around Queensland and goes on the TV and radio pushing this sort of misinformation on the people whom he meets. People building their own platforms, like David Pellowe, also build their own convictions about climate change based on stuff that people like Malcolm Roberts tell them.

People have a right to say what they like. Some people have a duty not to be misled — or to mislead.