Londoners are being short-changed by a scheme designed to encourage property developers to improve energy efficiency.

Almost two-thirds of the authorities who have collected money have never spent any of it, despite the funds being ring-fenced for financing carbon reduction and fuel poverty measures in their boroughs.

“It’s absolutely scandalous,” said Ruth London of Fuel Poverty Action. “The offsets have never been a real substitute for building in energy efficiency on the spot. They arise because developers have decided not to meet their obligations to make homes warm and affordable or to save carbon. The small compensation we’re offered is the promise to use it elsewhere.”

In 2011, Greater London Authority (GLA) introduced the potential for planning authorities to collect carbon offset contributions from developers who failed to meet city-wide targets for energy efficiency targets on site.

These targets were raised to “zero carbon” in October 2016, and with this, collecting carbon offsets became a requirement: all new “major” residential developments of 10 dwellings or more should now emit at least 35 per cent less carbon dioxide compared to 2013 building standards; for all remaining emissions, local authorities should require an offset, normally the equivalent of £60 per tonne over 30 years.

DeSmog UK submitted freedom of information requests to all 35 London planning authorities to find out if these powers were being utilised. The requests asked how much each authority had ever collected in carbon offsets from developers since offsetting first entered London policy, and how much of these funds had been spent.

Of the 32 that authorities that responded, 10 have never collected anything.

This spreadsheet shows which category each council that responded falls into:

“This has long been a concern of mine,” said London Assembly Member Leonie Cooper, who chairs the Assembly Environment Committee. She had previously encountered council planning committees that had not been discussing carbon offsets at all. “There wasn’t really much of an appetite to say how they were going to collect it.”

Newham council gave no reason for not collecting offsets and did not respond to requests for comment.

These six said that since then they have either received no applications that triggered offsets, or have negotiated contributions that haven’t yet been received, because payments are due on commencement of developments.

The question remains as to why these authorities have acted so slowly.

Some authorities may be afraid that placing more requirements on developers is unfeasible. For example, planning officers already demand quotas of affordable housing and developer funding for social goods, such as new playgrounds. They could fear losing those benefits by demanding carbon offsets on top.

Sutton and Bexley said they have prioritised affordable housing.

Other authorities may fear putting developers off building much-needed housing stock in the first place – house building in London has slowed recently.

Yet, developers often avoid fulfilling even their affordable housing quotas, by claiming their projects will be unprofitable if they do. Research by Shelter last year revealed the use of this loophole had led to 79 percent fewer affordable homes being built nationwide than could have been had the quotas been met.

Felix Wight, technical director at community energy cooperative Repowering London, sees it as the worst of all worlds.

“We’re getting neither. We’re not getting the affordable homes, nor the carbon offsets. And the developers are still getting the profits,” he said.

As for the property market, “London is London,” Ian Byrne, of the National Energy Foundation, told DeSmog UK. “There is still huge pent up demand for housing in the metropolitan area and I think [requiring carbon offsets] would be very little of a barrier towards doing that.”

Merton planning officers have been collecting carbon offsets from developers since 2003. They decided they should always demand carbon offsets as a baseline, then lift them for occasional developers who prove they cannot meet all their requirements. As they see it, developer pushback against any financial demands is inevitable; that is no reason not to apply them initially.

Councils’ own funding shortfalls may be another reason why some have been slow to collect offsets. Council budgets nationwide were 26 percent lower in 2017 than in 2010. In December, local government employment was at its lowest since records began in 1999.

“It can be difficult with anything to get over the starting line,” explained Byrne. “We recognise councils are under a lot of pressure and have been losing staff.”

This lack of resources could also explain why 13 authorities that are collecting carbon offsets have not yet spent any of their combined £1.6m.

Both – along with Waltham Forest, Lambeth, Brent, Hackney, London Legacy Development Corporation and Lewisham – said they are either currently making spending plans, or only received contributions recently, so have not yet had time to spend them.

However, Lewisham and Harrow had received £65,500 and £24,500 respectively by November 2016. Neither has so far distributed any funds. Lewisham said it hasn’t been able to establish a spending programme because offset payments are sporadic.

Haringey, Richmond and Hackney said they are waiting to amass more offset funds to finance significant projects. But some councils have amassed large funds: Hackney has collected £190,000 since 2015.

London Assembly member Cooper believes not spending funds may be a conscious decision by cash-strapped councils.

“If they can avoid spending it for a while, sitting on it and bringing some interest in is a help. But that’s obviously not the purpose [carbon offsetting] was introduced for.”

Repowering London’s CEO, Agamemnon Otero, has held discussions with numerous authorities about accessing offset funds to install community-owned renewable energy and fuel poverty measures, but nothing has ever materialised.

“It’s just incredible how the good will of cabinet members is always there, but the actual implementation never seems to happen.”

Once those negotiating on his behalf seem close to accessing the money, the process repeatedly gets blocked by finance departments.

Non-spending authorities are not acting illegally, but many are managing to spend the funds, even when the amounts are small.

Havering, for example, has only collected £9,400 and has spent almost all of it on installing PV panels at a local bowls club.

Merton has spent almost all the £135,000 it collected. Two-thirds of the collected cash went to funding solar panels on two schools, a day centre, a park and a city farm; each project was completed with £14,500 on average.

Merton has allocated its remaining offset funds to Retrofit Works, a non-profit coordinating the installation of large-scale energy saving measures in homes.

Many residents can’t afford to pay the rest, but now in Merton, Retrofit Works can distribute carbon offset funding to plug that gap for means-tested households who aren’t covered completely by ECO grants.

If more authorities started distributing offset money to top up ECO funding, Smith estimates he could get households’ bills down by around 60 per cent. Residents would get all installations free. 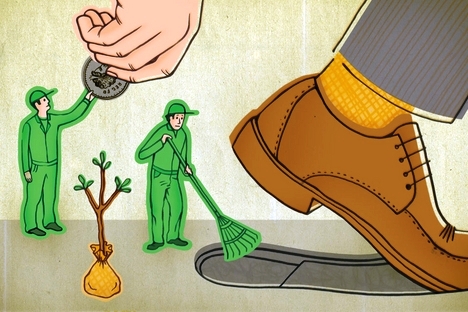 “Ultimately it’s about investing in wall and loft insulation, and new boilers. That’s going to have by far the biggest impact on people living in fuel poverty,” he said. “But we can’t do anything and that’s very frustrating for people.”

He imagines a situation where he could identify people suffering from fuel poverty and use offset funds to install new boilers or insulation – saving local authorities the work.

“For councils to have money and not use it, or to not collect it from the people who are frankly making a killing on property development, instead of protecting the council-tax payers and residents in their boroughs – and to leave people cold – is inexcusable”, she said.

“This calls into question whether using offsets, to allow developers to avoid their responsibility to build in energy efficiency in the first place, should be permitted at all.”