For the first time, the future of coal workers and communities across the world has become one of the most pressing issues of the global climate negotiations — infusing a sense of social reality within what is otherwise a very technical and political process.

“We have been waiting for this for 30 years,” said Brian Kohler sustainability director for IndustriALL, a union representing 50 million workers across 140 countries.

In the corridors of the UN climate talks in Katowice, Poland, Kohler is “delighted” that the topic has found its way high on this year’s agenda. It couldn’t have come soon enough.

One of the first to have coined the term “just transition” in the 1990s, Kohler is well aware of challenges facing workers and communities relying on fossil fuels extraction for their livelihoods and the necessity to ensure the energy transition will leave no-one behind.

Scientists from the UN Intergovernmental Panel on Climate Change (IPCC) have warned that the world has 12 years to take “rapid and transformative measures” and reduce emissions by 45 percent to remain below 1.5 degrees of warming and avoid the worst impacts of climate change.

“No-one has spoken strongly about the social dimension of climate policy but trade unions,” Kohler said.

Bert De Wel, policy officer at the International Trade Union Confederation (ITUC), agrees that “never, ever, before had climate negotiators debated so much about the impacts of the energy transition on workers and their communities”.

Addressing the UN conference, Scotland First Minister Nicola Sturgeon underlined the imperatives of a just transition, adding that there is “nothing to fear and everything to gain from a transition to a low-carbon economy”.

And yet, inside the climate summit known as COP24, there are concerns the emphasis on a just transition for workers could be used as a means to delay climate action and that so far, many workers still perceive this transition to be an unjust pursuit.

At the opening of the conference, Polish leaders sent out a clear message that a shift away from fossil fuels should not happen at the expense of coal workers and their communities. This idea was enshrined in the Silesia Declaration, which calls for a “paradigm shift” to clean energy “while ensuring a just transition of the workforce that creates decent work and quality jobs”.

The declaration is a watered down version of a text proposed by the ITUC. For De Wel, the Silesia Declaration is “a good enough starting point” and one that the trade union movement can get behind. But he has no illusion that this is only the start to a long journey to turn words into action.

“This declaration will only come into life if we take it forwards. If unions wait for governments to take it up, nothing is going to happen and there is a risk other parties will be hijacking the concept,” he said.

And there are cause for concerns. Coal — the dirtiest form of fossil fuel — is dominating discussions at the talks.

Inside the conference centre, many observers reacted with outrage when they discovered the Katowice’s pavilion included a large display of coal, included coal-made jewellery, cufflinks and even soap — a hint to Poland’s hopes that new technologies will “clean” coal and allow the industry to survive.

So Polish exhibition stand is literally made of coal. Points for authenticity. #COP24 pic.twitter.com/9FoLZzlMD2

Meanwhile, Germany is unable to agree a roadmap for coal phase out, China’s continued exports of coal to Asia, Africa and the Middle East is undermining its climate action and the US have planned another sideshow on how to make coal and other fossil fuels more efficient.

For Kohler, the idea that the concept of just transition could be used as a way to delay climate action and allow big polluters to continue business as usual “would be a terrible mistake”. “On the contrary,” he said, “just transition is aimed to enable action”.

‘Katowice is being used politically’

There are few better places to debate the issue of just transition than in Katowice.

The city is located in the region of Silesia, Poland’s coal heartland. At the end of the country’s communist era, nearly 30 years ago, the region was home to about 400,000 mining jobs. Today there are about 70,000 miners in Silesia, according to Marta Anczewska, climate and energy officer at WWF Poland.

About 80 percent of Poland’s electricity yet comes from coal, with draft government plans proposing to reduce that share to 60 percent by 2030.

The Polish government has been keen to showcase Katowice as a success story of “black to green” transformation while the city continues to take pride in its coal heritage. However, one does not need to look far to see a much more complex picture.

Last week, the Polish trade union Solidarity signed a joint statement with the Chicago-based Heartland Institute, a notorious climate science denying organisation, rejecting the scientific consensus on climate change and “the elimination of coal from the world’s energy portfolio”.

Although the statement makes no reference to protecting jobs, it calls on world leaders to focus on “raising living standards around the world”.

“The idea of just transition is a very hard discussion to have in Poland because there are so many conflicts of interests, including a very strong coal lobby,” said WWF Poland’s Anczewska.

“We need to address the fact that people here are attached to coal and have built their pride on it,” Anczewska said. “But Poland’s position during these talks appears incoherent,” she said, pointing out that despite the Silesia declaration, the Polish government had no real plans for coal phase-out.

“This is not an economic issue but a political one,” she said. 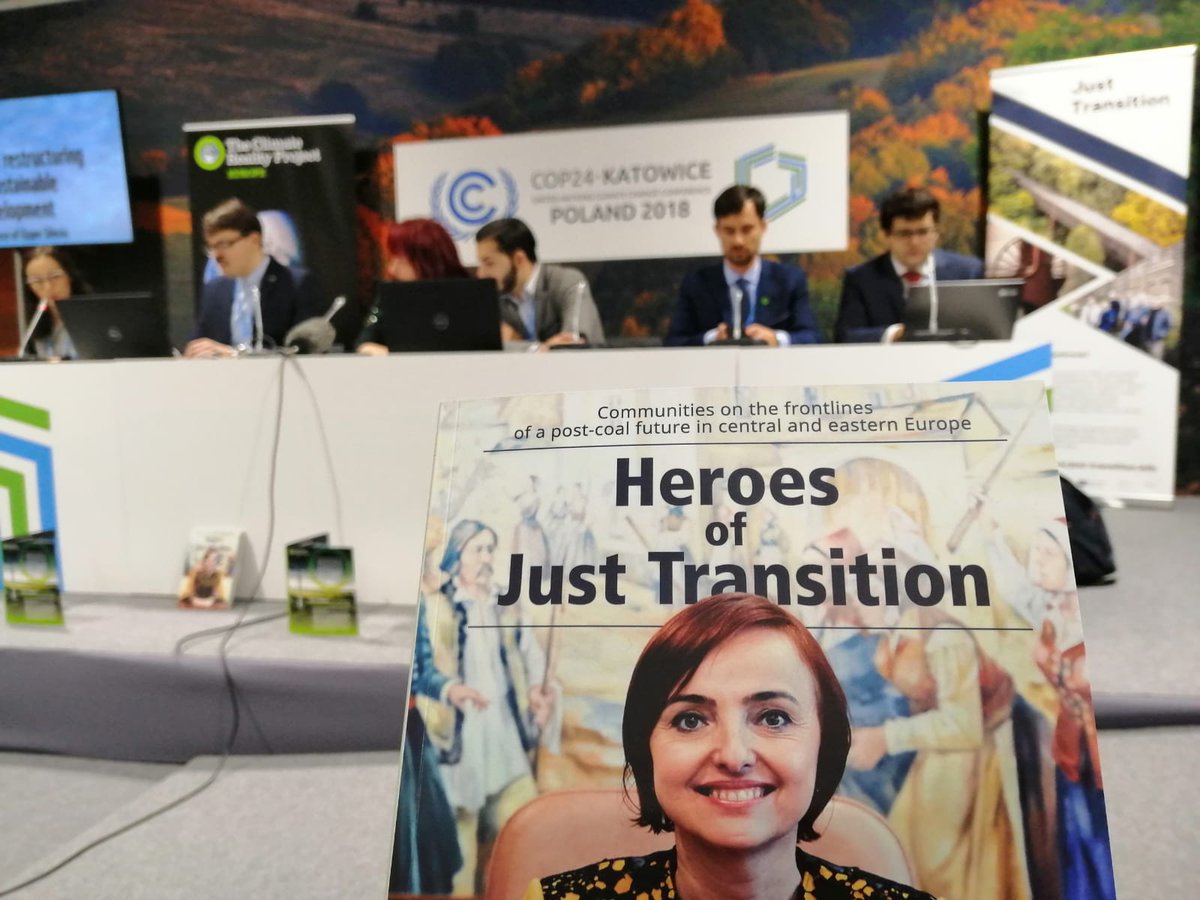 A side event at the UN climate talks hears from just transition in eastern Europe. Image Credit: Magdalena Bartecka

A seat at the table

A just transition to a zero-carbon future cannot take place without a social dimension and a public dialogue, according to Kohler.

“We, workers, cannot accept an unjust transition,” he said. Instead, he said workers should be presented with a positive alternative in a future where the fossil fuel industry no longer exists.

“So far, the message that people hear is that they have to bite the bullet for the sake of a green future. If you can’t give people a message of optimism, they will cling on to their dirty plants because that’s all they have,” he said.

Speaking on the fringe of the climate talks, Elsa Velichkova mayor of the coal town of Bobov Dol in south-west Bulgaria, explains how she has seen coal phase-out lead to desperation after plants were suddenly closed in the region, leaving people out of work.

“The situation is so bad. The population of the town is shrinking. There are no opportunities and young people are leaving. We have been left to manage the situation by ourselves. As mayor, I have been left alone to deal with it. I have the support of absolutely no-one,” she said.

The Silesia Declaration calls for the creation of alternative “decent work and quality jobs” and the importance of a social dialogue, including community  representatives and trade unions to develop “strategies and adaptation planning processes”.

In France, the yellow jackets or “gilets jaunes” protests have sent a strong signal that failure to engage in a social dialogue and foster climate policies from the bottom-up can create a transition that is perceived as fundamentally unjust.

A hike on fuel tax in the name of climate action led to some of the most violent protests since the Paris riots of 1968. The yellow jackets’ movement quickly grew into a wider expression of anger against a squeeze of living standards and the French government was forced to u-turn and cancel the tax.

The questions of who is paying for the energy transition is one that fundamentally needs to be addressed if policies are to be created with justice in mind. De Wel from the ITUC said. “In France, rich people who enjoy weekend trip to New York were not being affected by the tax. This issue has to be looked through redistribution lens,” he said.

In a tweet Laurence Tubiana, an architect of the Paris Agreement and head of the European Climate Foundation NGO, stressed that the protests were not against climate action but rather “a wake-up call for social justice”.

“The transition to a cleaner, greener economy cannot be top-down: it has to be truly inclusive,” she wrote.

Her comments were echoed by Pierre Cannet from WWF France, who told reporters in Katowice that while a tax on carbon was needed to tackle climate change, the implementation process “needs to include a dialogue with citizens”.

“France now has an opportunity to get it right by bringing people into the discussion,” he said.

Laura Merrill, senior policy adviser at the International Institute for Sustainable Development (IISD), warned that governments putting a price on carbon and changing policies in a way that affects the population “need to give something back to the people” in the form of social safety nets such as re-training packages or other welfare measures.

For Merrill, one way to finance these measures could be to redirect the estimated $425bn governments spend each year on subsiding fossil fuels to pay for the transition. “There has to be social mitigation measures to climate policies. This is an issue of trust,” she said.

De Wel, from the ITUC, remains optimistic. “Europe is rich enough to manage a just transition,” he said.

“If us, in rich Europe are not able to provide a better alternative to miners and fossil fuel workers, then what will happen in other countries such as India, China and Indonesia, where the problem is so much greater.”