No to Heathrow: Climate Campaigners Outline Case Against Third Runway

Climate campaigners have begun to put pressure on the government’s plan to expand Heathrow during a 10-day judicial review at the High Court. The case will test if the “government is bound by its own rules,” according to the legal team fighting the plan for a third runway.

On Wednesday, the court heard arguments concerning the climate change implications of the development, brought by climate lawyers Plan B and environmental campaign group Friends of the Earth against Transport Secretary Chris Grayling.

The House of Commons voted in favour of the estimated £14 billion expansion in June 2018. Construction of the third runway is set to begin in 2021, with an estimated 700 additional planes over Heathrow everyday.

Tim Crosland, Director of Plan B, said expansion was “completely inconsistent with the science.”

“It looks almost certain that if Heathrow proceeds [with expansion], there’s just no chance we’ll be able to comply with the Paris Agreement,” he said. “Why on Earth would the government have invested everything that it did in the Paris Agreement if it wasn’t going to consider it?”

Plan B argued that the proposal to expand Heathrow airport breaches legal obligations in the Planning Act to alleviate the impact of climate change. The group also argued that Grayling did not assess the Airports National Policy Statement (ANPS), the policy framework for Heathrow expansion, against the Paris Agreement.

“It is plainly incompatible with sustainable economic strategy,” Jha added. 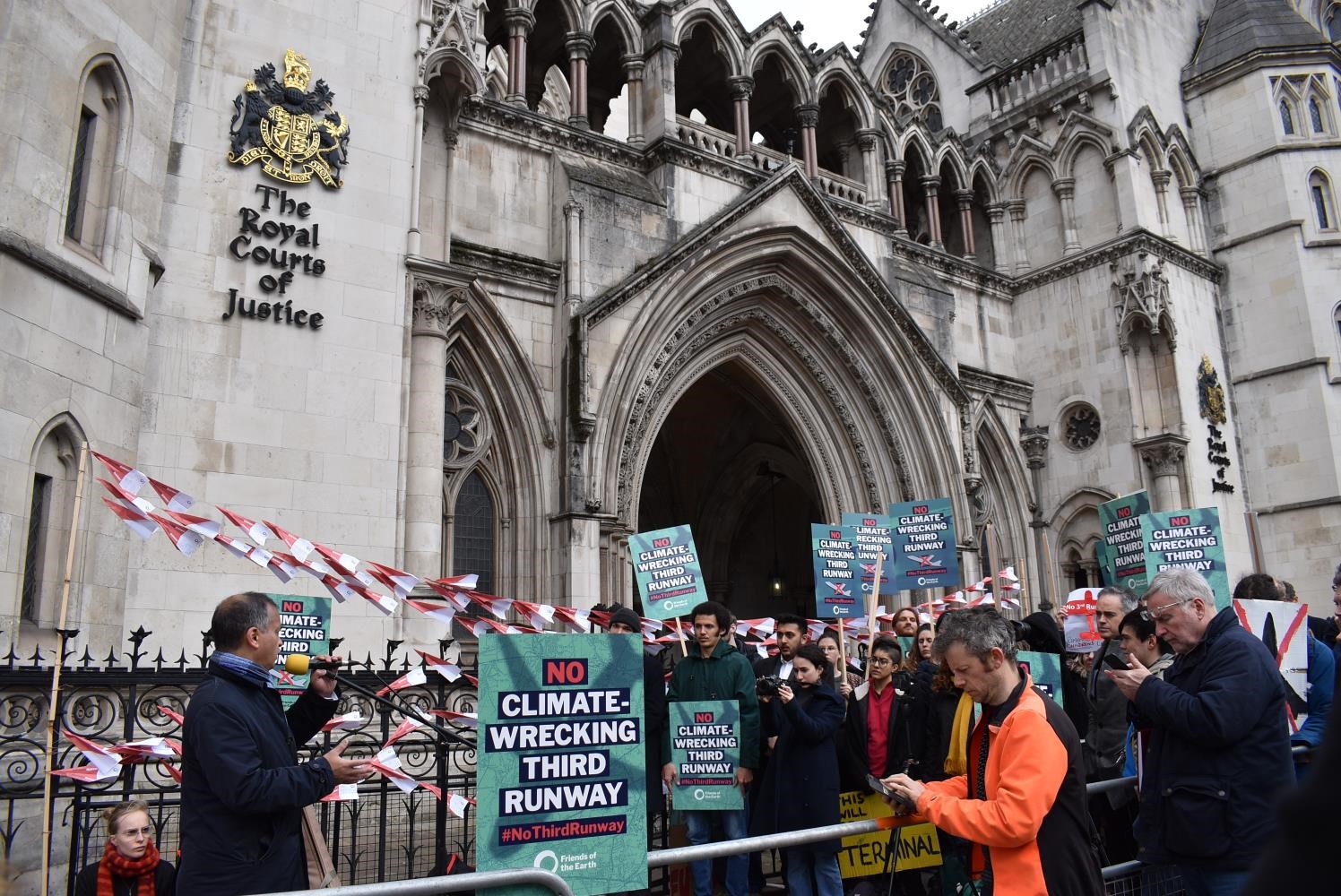 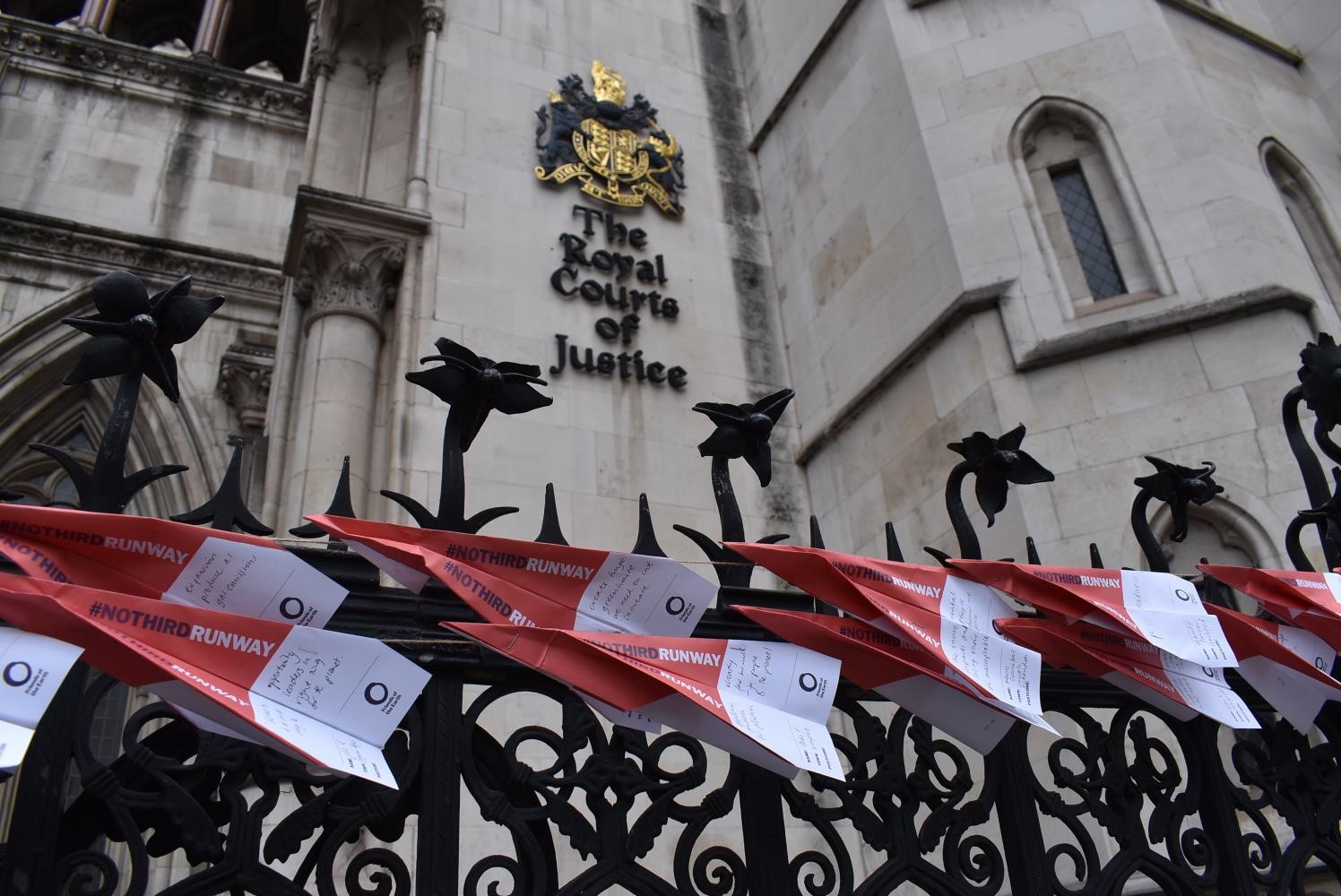 Protestors gathered outside the court to give speeches ahead of the hearing, and paper planes with written messages of support were hung from the gates outside the court. “I fear for my children’s future,” read one message, while another said that  “cheap flights are killing the Earth.”

Sebastian Kaye, a student and Plan B volunteer, said that it’s “crucial that we don’t allow the third runway to be built because of the extra carbon emissions as a result of it.”

“It’s also really important for us to be able to overturn this decision to send a really loud and clear message to our political class to tell them that they’re not pulling their weight in terms of climate action and to show them that they will be held accountable,” he added.

Five judicial reviews in total have been brought against Grayling. Other parties bringing legal challenges include the mayor of London Sadiq Khan, local authorities Hillingdon, Hammersmith and Fulham, Richmond, Wandsworth, and the Royal Borough of Windsor and Maidenhead, and other environmental groups such as Greenpeace and Friends of the Earth.

Friends of the Earth, which was also able to present arguments today, is pursuing a different line of objection to Plan B. The group believes the airport’s expansion policy is unlawful because it breaches the UK’s climate change commitments and duties towards sustainable development.

Friends of the Earth argue that the airport’s expansion will jeopardise the country’s ability to reduce greenhouse gas emissions that are “necessary to prevent global warming from causing catastrophic, irreversible impacts for people and ecosystems.”

“We consider they have acted unlawfully and unfairly in not considering the true impact on future generations,” said William Rundle, Head of Legal at Friends of the Earth.

A spokesperson for the Department of Transport defended the plans, however. “Expansion at Heathrow is a critical programme which will boost the economy, increase our international connections and create tens of thousands of new jobs,” they said.

“As with any major infrastructure project, the government has been anticipating legal challenges and we will robustly defend our position. We recognise the local impact of any expansion, which is why a world class package of mitigations would need to be delivered.”