The Global Climate Coalition (GCC) was a fossil-fuel backed lobby group active in the mid-90s and early 2000s. A collection of briefings, meeting minutes, notes, and correspondence from the group, released by the Climate Investigations Centre in collaboration with DeSmog and Climate Liability News, show how the GCC tried to manipulate the UN’s official scientific advisory body, the Intergovernmental Panel on Climate Change (IPCC).

The lobby group focused its efforts on trying to constrain the strength of the IPCC’s statements about human causes of climate change in the run up to the UN’s annual climate meeting in Kyoto in 1997, where world leaders agreed to the world’s first global climate change treaty. Officials from President George W. Bush’s administration would later credit the GCC for influencing his decision to abandon the landmark Kyoto treaty.

Despite sophisticated coordination, connections to the highest political echelons, and huge resources, the GCC had limited success at influencing the UN’s main scientific body. The group was disbanded in 2002 after many members left, citing reputational risks around the groups’ peddling of climate science denial as the reason for their departure.

The documents show the GCC:

In order to keep up with the evolution of climate science, the GCC committed significant resources to attending and monitoring the IPCC process. And this wasn’t cheap.

Tax returns show that the GCC spent hundreds of thousands of dollars on an “IPCC tracker fund” in the 1990s, leading up to the landmark Kyoto meeting in 1997.

The records show the GCC’s Science and Technology Assessment Committee (STAC) spent spent $182,650 on the IPCC Tracker fund during 1994, 1995, and 1996 (the only years for which data is available) — more than 30 percent of the committee’s total expenditure over that three year period. 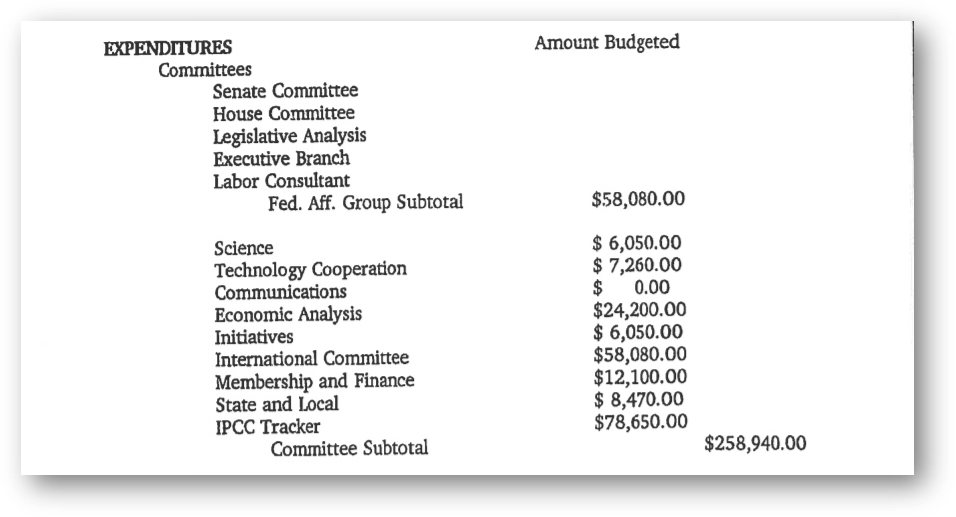 The GCC canvassed its members to nominate people from their companies to become IPCC authors and contributors. And the group sent STAC members to IPCC meetings to lobby scientists, with occasional success.

In one instance, the GCC suggested language to the IPCC that would allow a wider breadth of ‘evidence’ (including questionable science supported by the GCC) to be included in technical reports. This suggestion was “accepted almost in its entirety” after intensive lobbying by its representatives and after “assistance from several countries”, meeting minutes show.

But despite the GCC’s targeted efforts and significant resources, the IPCC largely remained steadfast.

The IPCC told DeSmog that technical reports are based on material already included in the bigger assessment reports, and don’t introduce any new information. The IPCC has only published six technical reports in 30 years.

Jonthan Lynn, Head of Communications for the IPCC, said it was very hard for industry to directly impact the IPCC reports because of the many layers and rounds of review each publication is subjected to.

“It would be extremely difficult to influence IPCC reports because they go through multiple drafting and review in what amounts to the biggest peer-review exercise in the world,” he said.

“The process is designed to ensure that IPCC reports are objective, comprehensive, open, and transparent through a massive and iterative quality-checking. That doesn’t mean it can’t go wrong, but it’s been set up to minimize the chances of that.”

“Different industry groups and lobby groups may try to put their spin on IPCC reports, but it’s fair to say that they are recognized as a fair and authoritative statement of the scientific community’s knowledge about climate change at the time they are released.”

The robustness provided by this peer-review process explains why the GCC was so intent on undermining it, conducting a public smear campaign to cast doubt on the validity of the IPCC’s findings.

The GCC did so by publicly questioning the validity of the IPCC’s peer-review process, while simultaneously using the IPCC’s status as a respected scientific body to promote the credentials of its own climate science denial research, the documents show.

In a 1997 document, the GCC circulated selected quotes from the IPCC’s Second Assessment Report (SAR). These were cherry-picked to emphasise the uncertainties around climate science and human activities’ impact on global warming.

In the introduction to the document, the GCC states that the quotes that appear in the final draft of the SAR were “altered substantially” from earlier drafts. “The cumulative impact of the alterations diminish the high level of uncertainty expressed in the original text,” it said.

But the GCC was also quick to borrow the IPCC’s reputation as an academic heavyweight when it suited the organisation.

In a document entitled ‘Scientific Uncertainties from the IPCC Second Assessment Report’ attached to meeting minutes from April 1996, one comment reads:

The GCC was keen to emphasise the underlying documents as it had more input into these than the IPCC’s Summary for Policymakers documents. Emphasising that the former reports were peer-reviewed while the latter were essentially political exercises gave credence to sections emphasising uncertainty that the group would then selectively quote.

The GCC also sought to smear specific scientists whose work was helping to establish the scientific basis for anthropogenic global warming linked to burning fossil fuels.

In one well-documented case, the GCC targeted the work of Ben Santer, an atmospheric scientist at Lawrence Livermore National Laboratory. In 1994, as a lead author of a chapter of the IPCC’s SAR, Santer and his colleagues wrote:

“The balance of evidence suggests a discernible human influence on global climate.”

It was one of the first instances of the scientific community explicitly linking climate change to human activity. And the GCC didn’t like it.

It has been widely reported, including by Santer, that in 1996 the GCC circulated a briefing titled “The IPCC: Institutionalized ‘Scientific Cleansing’?”. That report claimed Santer had manipulated the IPCC’s peer-review process to make unsubstantiated claims.

And at a symposium in May 1996, William O’Keefe of the GCC repeated claims that Santer and his co-authors had deliberately exaggerated the amount of certainty with which scientists could attribute climate change to human activity, research by Harvard academics David Levy and Sandra Rothenberg says.

The GCC also placed advertisements in the Washington Times and Energy Daily “stating that ‘unless the management of the IPCC promptly undertakes to republish the printed versions…the IPCC‘s credibility will have been lost’,” the same research says.

O’Keefe’s allegations were repeated shortly after that May meeting in an op-ed in the Wall Street Journal by Fred Seitz, a former president of the U.S. National Academy of Sciences who once worked for the tobacco industry, and is not a climate scientist.

Seitz’s work had earlier been praised in an internal GCC briefing, which noted approvingly that he had conducted a useful study “that casts doubt on global warming”.

Geoffrey Supran, a post-doctoral fellow from Harvard University who has been on the receiving end of attacks by the fossil fuel industry, is unsurprised by the GCC’s tactics. He told DeSmog:

“Their attacks on IPCC science and scientists are a particularly aggressive facet of a broader effort.”

“The GCC is where many fossil fuel companies cut their climate denying teeth. Unfortunately, their denial and delay tactics continue to this day via increasingly veiled, subversive initiatives, including the funding of climate denying third-party organizations and politicians.”

“ExxonMobil’s attacks on me and my colleagues and on our peer-reviewed research show that the tiger hasn’t changed its stripes.”

Despite the GCC’s efforts to undermine the IPCC on multiple fronts over the course of two decades, the UN body continues to have a good working relationship with the fossil fuel industry.

An Exxon representative also contributed to the Fifth Assessment Report and was an author on last year’s major report into whether the world could limit warming to 1.5 degrees C.

In 2003, Exxon defended its involvement with groups that questioned mainstream climate science to the New York Times. Tom Cirigliano, a spokesman for Exxon, said:

”We want to support organizations that are trying to broaden the debate on an issue that is so important to all of us.”

“There is this whole issue that no one should question the science of global climate change that is ludicrous. That’s the kind of dark-ages thinking that gets you in a lot of trouble.”

The company’s statements on climate science have since evolved significantly.

Its website currently states that Exxon believes “that climate change risks warrant action and it’s going to take all of us — business, governments, and consumers — to make meaningful progress.” It says the company supports the goals of the landmark Paris Agreement of climate change.

It also claims that the ExxonKnew controversy — where a cache of leaked documents showed the company’s efforts to support climate science denial and dampen regulatory action —  “is a campaign orchestrated by activists and trial lawyers to misrepresent ExxonMobil’s position and research on climate change.”

Despite their chequered histories, Exxon and other fossil fuel companies’ history of climate science denial doesn’t concern the IPCC’s Lynn, who points out that the scientific body is built to withstand pressure from any particular sector or individual. He told DeSmog:

“Given the large, diverse, and collegial structure of the author teams for each chapter it would be difficult for a single author to impose an assessment of the scientific literature that was not supported by their colleagues.”

So does that mean this is all a problem of the past? Not necessarily.

Industry efforts to quash inconvenient scientific conclusions continue, according to Robert Brulle, a Professor of Sociology at Drexel University. He told DeSmog the “efforts of the GCC continue to live on in the ongoing efforts of many conservative think tanks to dispute the findings of climate science, and to attack climate scientists.”

“One key component of this effort was to manipulate climate science as summarized in the IPCC reports. Not unlike other industries, such as asbestos, tobacco, or lead, scientific findings pose a major threat to fossil fuel corporations’ bottom line. Hence one key part of their strategy has been, and continues to be to minimize the anthropogenic factor driving climate change.”

“This is still a common talking point among politicians.”