Representatives of ExxonMobil’s Fife Ethylene Plant have apologised after unexpected flaring sent black smoke high into the skies across Fife for most of the past week. But the community remains furious at what it sees as regulatory failure and corporate evasion from ExxonMobil.

The flare at the giant petrochemical plant at Mossmorran could be seen for miles – it was clearly visible across the Firth of Forth – and went on for six days. It is one year since the Mossmorran plant was hit by an unscheduled flaring after several incidents in 2017 and 2018 led to the plant owners receiving “final warnings” from the environmental agency.

The Scottish Environmental Protection Agency (SEPA) said it was aware of the unscheduled flaring. ExxonMobil issued a statement saying there was “no danger to the local communities” and added: “Flaring is necessary following an interruption in our steam generating boilers.”

“The loss of steam resulted in the smoky flaring earlier this afternoon. Our team has resolved this and flaring is now clear.”

But Mossmorran Action Group today organised a protest at Fife House in Kirkcaldy urging councillors to put aside party political differences and support a motion calling for an independent investigation into the environmental, health and social impacts of Mossmorran’s operations.

Mossmorran Action Group chair James Glen told DeSmog the organisation “has been calling for a full independent investigation since the bout of extreme emergency flaring two years ago.”

“We have seen SEPA up its game a bit, but little real progress has been made in either establishing the impacts of the plant or finding ways to mitigate them. There has been no progress at all in providing residents with any kind of redress over what they are forced to endure.”

“It’s time for everyone – from Fife Council to the Scottish Government – to take the bull by the horns and establish once and for all exactly how Mossmorran is affecting local communities.” 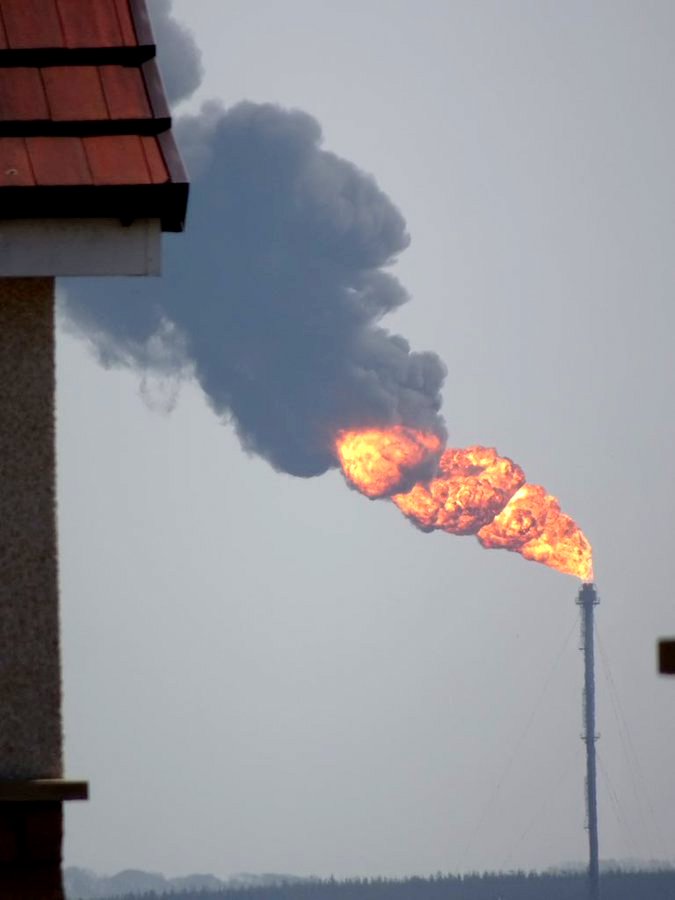 Stuart Neill, the External Affairs Manager for ExxonMobil Chemical said the company did “want to actively engage with public and stakeholders regarding the recent unplanned flaring” but refused a meeting with the group citing a calendar clash. He invited community representatives instead to have a Q&A with ExxonMobil staff.

Campaigners said they were upset by ExxonMobil’s response, with Mossmorran Action Group issuing a statement saying:

“We are absolutely scunnered by Shell’s response. We have invited them to a public meeting together with our MP, MSPs, representatives from SEPA and other regulatory bodies to respond to unprecedented public concern about the worst bout of emergency flaring and most acute emissions in the plant’s history. Yet despite having thousands of employees and three weeks’ notice, Shell can’t attend because of ‘long-standing business commitments’ elsewhere.”

“There could be no clearer statement of their total lack of commitment to Fife and to the communities who have been hosting their operations for decades.”

SEPA have never used their full legal powers against ExonnMobil for operational failures and environmental damage because it judged that the operator was putting in place robust techniques for preventing emissions and impacts on the environment.

But local campaigners feel that SEPA should waste no time in using the full legal powers at its disposal to hold ExonnMobil to account. They are calling for permanent time-based air quality monitors and an independent study of the health and social impacts of the Mossmorran complex. Mossmoran Action Group’s Glen told DeSmog:

“The recent 6-day long period of emissions from the plant – longer, nastier and more extended in its pollution, noise and light impacts – has left thousands of people asking questions and demanding answers. SEPA only turns up when the flaring is underway and then takes a snapshot of very limited impacts – noise and some emissions – in a couple of places because its overriding interest is to check Mossmorran’s compliance with regulatory conditions.”

“No one is measuring the wider, ongoing picture with all the emissions from Mossmorran and how they are affecting the environment and people’s lives.”