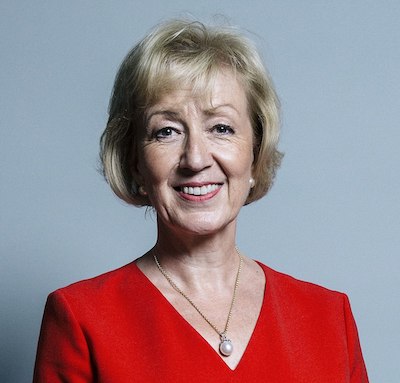 Andrea Leadsom is a former UK Secretary of State for Business, Energy and Industrial Strategy and a Conservative MP for South Northamptonshire. Between June 2017 and May 2019, she was Leader of the House of Commons. [20], [2]

In October 2015, the Independent reported that Leadsom had told a parliamentary inquiry that when she took up her role as energy minister in May 2015 she had to question whether climate change was real because she was unsure. She said that she was now “completely persuaded” on climate change. [3]

During the Brexit campaign, Leadsom was a committee member of Vote Leave, the official group working for the UK to leave the EU. She also ran for party leadership in July 2016 following the successful Brexit Vote. [4]

Multi-millionaire Brexit backer, and UKIP donor, Arron Banks put his support behind Leadsom for the leadership of the Conservative Party. Leave.EU, a campaign group funded by Banks and Peter Hargreaves, also pushed for her to win the leadership race, which Leadsom withdrew from after failing to gain enough support. [5], [6]

Prior government positions include serving as Secretary of State for Environment, Food and Rural Affairs from July 2016 until June 2017 as well as Minister of State at the Department of Energy and Climate Change from May 2015 until July 2016. [2]

In an interview with parliament’s House Magazine, Leadsom said one of her priorities as Prime Minister would be to declare a “climate emergency”:

“This is a massive opportunity to demonstrate that far from decarbonising being a loss of GDP, loss of jobs and so on and so on, actually the clean growth technology sector is fast growing, and it can be an opportunity for new jobs, new skills, a way to get young people energised to decarbonising our economy.”

“I think it would be very good politics because it would demonstrate our willingness to show leadership and to really tackle a very important challenge that I think would win votes for the Conservative party, particularly among young people and new families.

“Issues of air quality, issues of global warming and so on are very big concerns for many people.”

In the spring of 2016 during the Brexit campaign, Leadsom’s Fresh Start pressure group released a manifesto. Among its proposals was a plan to ditch current and post-2020 targets for renewable energy, instead investing in shale gas, new nuclear, and carbon capture and storage technology. This would ensure the UK met its climate goals at a lower cost, it said. [7], [8]

The group’s environment briefing states that “we have deliberately not challenged the science of anthropomorphic [sic] climate change.”

“Whilst the business case for government support for learning and innovation in a range of promising low carbon energy technologies is clear,” it continues, “the need to meet the EU2020 renewable targets constitutes a burdensome and most unnecessarily expensive policy.”

Upon entering government in her role as energy minister in May 2015, the Independent reported that Leadsom had to question whether climate change was real. As reported at the website Drill or Drop, Leadsom said: [3], [9]

“When I first came to this job one of my two questions was: ‘Is climate change real?’ and the other was ‘Is hydraulic fracturing safe?’ And on both of those questions I am now completely persuaded.”

Leadsom said in an interview with LBC Radio about a recently announced moratorium on fracking: [21]

“What we’re announcing today is a moratorium, which is not the same as a ban, I mean there’s no doubt shale gas has huge potential in the UK.

“But we’ve always said we’ll be led by the science and the oil and gas authority has made clear that the seismic activity that we saw in Preston New Road recently where there was shale gas being explored for, was unpredictable and unexpected. And we can’t guarantee that it wouldn’t be even worse than that.”

“We will still continue to need to use gas into the next decades as we decarbonize our system, and we will be able to import it from overseas, but it’s very disappointing.”

[…] “It is the seismic activity that is the area that we need to closely regulate and we need that certainty. So as the science improves, we will be able to look at this again but that’s not for now.” [21]

During her role at the former Department of Energy and Climate Change she continually worked to push fracking in the UK, saying it was an opportunity “not to be missed.” [10]

“Shale gas from fracking could also ensure that we have a reliable mix in our electricity supply.

[…] “I really believe that this is an opportunity we can’t afford to miss – but safety will always be the most important thing and we aren’t taking any chances,” Leadsom wrote at the Yorkshire Post.

Speaking at a fringe event at the Conservative Party Conference: [11]

“There is no chance in the near term that we move away from fossil fuels; that just cannot happen.”

Speaking at the All Party Parliamentary Group on Unconventional Gas and Oil: [3]

“When I first came to this job one of my two questions was: ‘Is climate change real?’ and the other was ‘Is hydraulic fracturing safe?’ And on both of those questions I am now completely persuaded.”

Leadsom wrote an article for The Times anticipating the 2021 UN Climate Change Conference (COP26), which outlined ways for the UK to take a leading role in counteracting climate change. She wrote: “We can grow our green economy with thousands of new jobs and skills, offering new hope as we look to the future,” adding: “The prime minister is committed to building back better so let’s make 2021 a year of global renewal. For our planet, for our young people’s future and for the United Kingdom.” [23]

In an article for The Times, Leadsom acknowledged the necessity of green investment to combat economic hardship resulting from the COVID-19 pandemic, stating: “My advice to Mr Sunak would be to look to our strength in the fast-growing green economy, where the 450,000 green-collar jobs could rise to two million by 2030. I urge him to invest in thousands of green apprenticeships for young people, to introduce retraining for older workers, to set decarbonisation targets by sector to create investment opportunities, to inject public funds into green infrastructure and, vitally, to build international collaborations in areas like offshore wind, battery technology and afforestation.” [22]

Shortly after being appointed Secretary of State for Business, Energy and Industrial Strategy in Boris Johnson‘s new cabinet, Leadsom held a “Brexit roundtable” with representatives from a number of businesses, including fracking firm INEOS. A press release about the event noted that Leadsom had encouraged the businesses to “continue their positive approach to the future, and to talk about the opportunities that lie ahead”. [19]

As a candidate in the Conservative leadership contest, Leadsom announced that one of her priorities as Prime Minister would be to declare a “climate emergency,” arguing that the “clean growth technology sector is fast growing” and could be “bigger than the whole financial services sector.” [18]

Leadsom launched a Eurosceptic pressure group, Fresh Start. The group has an energy policy which features “keeping bills down” and “cost efficiency.” Its environment briefing states: “we have deliberately not challenged the science of anthropomorphic [sic] climate change.” [12]

Andrea Leadsom met with coal and steel industry representatives during a UK Coal Forum meeting. During this meeting the industry admitted it was “currently in crisis” and as the minutes show, “It was stressed that coal could be helpful in the transition to decarbonisation and could be good as cheap, backup capacity.” [13], [14]

US lobby group ALEC (The American Legislative Exchange Council) paid for Andrea Leadsom to visit Washington and Chicago to attend exchange meetings. This trip was valued at £1,800.00. ALEC is known for working with big oil companies such as Exxon as well as lobbying against legislation that seeks to tackle climate change. [15]

Some sample publications by Leadsom below: