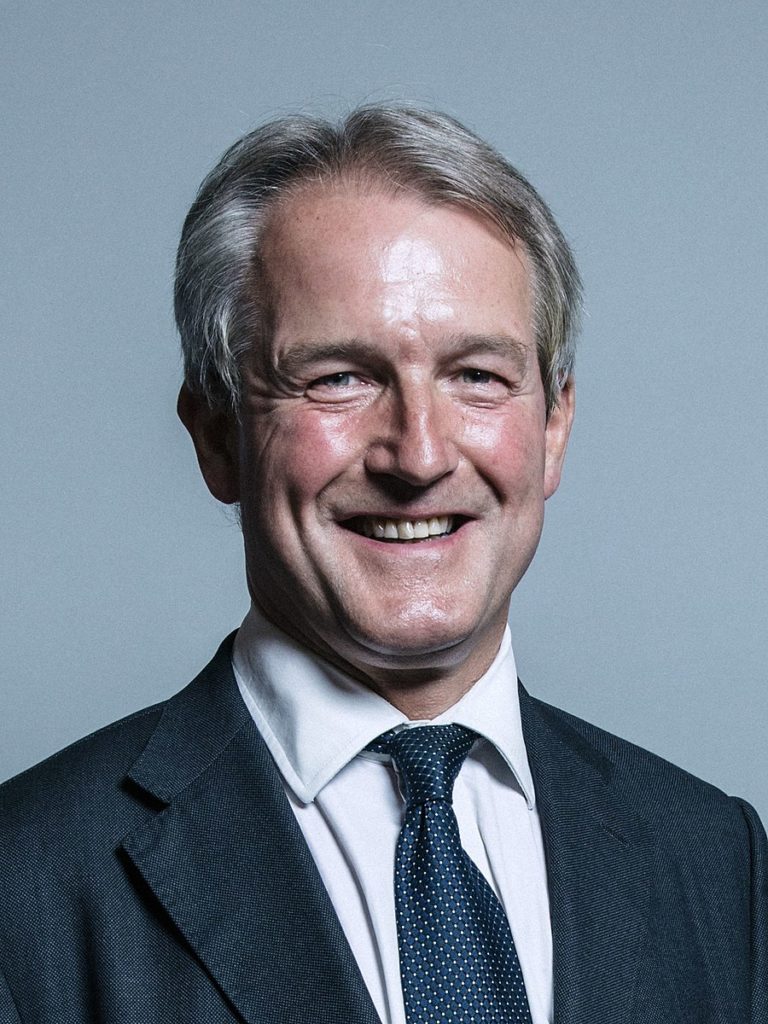 Owen Paterson is MP for North Shropshire and a former environment secretary. He was appointed to the role in 2012 but was sacked by then prime minister David Cameron for fear his view that climate change was not a serious problem would cost the Conservative party votes in the 2015 general election. [2], [3]

Paterson’s brother-in-law is Matt Ridley, a hereditary peer and advisor to the climate science denial campaign group, the Global Warming Policy Foundation. Paterson’s annual lecture to the GWPF in 2014 – in which he called for the UK to scrap the climate change act – was actually written by Ridley, it later emerged. [4], [5], [6], [7]

After being sacked from the cabinet, Paterson set up the pro-Brexit thinktank UK2020, which aimed to cut regulations and targets related to climate change and was dissolved in January 2020. [8], [9]

Paterson was one of three MPs to found the official Vote Leave campaign to take the UK out of the European Union, according to a speech he gave in 2017 to the Heritage Foundation, a US-based conservative think tank with a long history of climate science denial and opposition to climate policies. [29]

Paterson has close ties with other US free-market groups that have rejected mainstream climate science and lobbied against climate action, such as the Competitive Enterprise Institute. [16]

In his lecture to the GWPF, later revealed to have been partly written by climate science denier Matt Ridley, Paterson said: [10]

“I readily accept the main points of the greenhouse theory. Other things being equal, carbon dioxide emissions will produce some warming. The question always has been: how much? On that there is considerable uncertainty.

“For, I also accept the unambiguous failure of the atmosphere to warm anything like as fast as predicted by the vast majority of climate models over the past 35 years, when measured by both satellites and surface thermometers. And indeed the failure of the atmosphere to warm at all over the past 18 years – according to some sources. Many policymakers have still to catch up with the facts.

“I also note that the forecast effects of climate change have been consistently and widely exaggerated thus far.”

Delivering a speech on “The Future of Europe” at a UK2020 event, Paterson concluded: [11]

“It is Remain that is the leap in the dark.

To vote Leave is the safe option.”

” […] I want to explain what Remain really means. And to assure those of you who are undecided, that to Leave really is the safe and benign option.”

“We are the only country to have legally bound ourselves to the 2050 targets – and certainly the only one to bind ourselves to a doomed policy. In the absence of a legally binding international agreement, which looks unlikely given disagreement within EU member states and the position of the BRIC countries, the Climate Change Act should be effectively suspended and eventually repealed.”

“I remain open-minded to the possibility that climate change may one day turn dangerous. So, it would be good to cut emissions, as long as we do not cause great suffering now for those on low incomes, or damage today’s environment.”

Following his being fired from his position as Environment Secretary, Paterson said: [12]

“I have not been afraid to take on the greens on everything, from fracking to GM foods, the badger cull, even bees!”

Paterson tweeted a link to an article written by Matt Ridley for Global Vision entitled, ‘The Government’s energy policy could cripple global Britain’. The article stated that, “the purpose of decarbonisation is to alter the climate for the better. Yet nobody in their right mind thinks that net zero emissions will prevent wet winters and flooding. Such bad weather happened in the past anyway, and flood prevention and mitigation would be necessary even if the climate ceased warming. Rather than wasting money on subsidies to renewables, how about some flood defences? They work!” [30]

Paterson wrote an article for The Telegraph criticising the government’s plans to expand onshore wind energy as part of its efforts to reach net zero emissions by 2050. Disputing the effectiveness of wind turbines, Paterson stated: “the problems of wind turbines go far beyond their being mere eyesores,” adding: “Wind turbines are already close to their maximum theoretical efficiency – the Betz limit – and their effectiveness will always be determined by the wind available.” [32]

Paterson wrote an article for The Telegraph criticising the Environmental Agency (EA)’s response to flooding from Storms Ciara and Dennis, arguing that the decline in dredging and promotion of biodiversity had exacerbated floods. [33]

He wrote: “This self-regarding ‘environmental’ thinking was, ultimately, responsible for an environmental disaster estimated to have cost over £100 million. Unable to escape through undredged rivers, the flood waters stagnated, unable to support life and drowning countless land animals and ground-nesting birds.”

Documents showed Paterson had lobbied the Department for International Development to secure contracts for a multinational firm he was being paid to advise. Paterson is paid nearly £100,000 as a consultant for Randox, a private forensic testing firm. [27]

A Guardian report revealed that unknown donors had funded nearly £39,000 worth of trips by Paterson via UK 2020, the thinktank he set up after leaving the cabinet in 2014. The trips included one to the US in November 2018 to campaign for a hard Brexit. [26]

Paterson delivered a speech to the Heritage Foundation, a free-market think tank based in Washington DC which has repeatedly spread disinformation about climate change and received funding from ExxonMobil and the Koch Foundation. [13]

According to the event description, Paterson made the case for how Brexit “can further strenghten the Special Relationship [between the UK and the US] as a powerful force for free trade and innovation on the world stage.” [13]

During his visit to Washington DC, Paterson also visited The White House Writers Group, which describes itself as a “strategic communications” consulting company. Writing on Twitter, Paterson boasted to have met US government representatives, farmers and industry representatives and discussed “the downsides for the US of Chequers preventing a US–UK free trade deal and the spectacular gains which such a deal could provide for both countries.” [14], [15]

Paterson was pictured with Republican Senator for Oklahoma James (Jim) Inhofe and Director of Energy and Environment at the Competitive Enterprise Institute, Myron Ebell. In the photo, Paterson is seen holding a copy of Inhofe’s book “The Greatest Hoax”, which claims global warming is a “conspiracy” being used to impose more regulations and increase taxes. [28]

Paterson delivered a speech to an invited audience at the Competitive Enterprise Institute – a US thinktank with a history of spreading climate misinformation. In the speech, he said: [16], [17]

“The EU has single-mindedly pursued an overly prescriptive interpretation of the “Precautionary Principle,” smothering opportunities for innovation in thrall to the emotions of vocal activists rather than scientific evidence and advice.

“The green blob dominates thinking in Brussels, with generous grants given to green groups so that they will lobby it for regulations which then require large budgets to enforce.”

Paterson was introduced by Myron Ebell, the institute’s Director for Energy and Environment. Ebell led President Donald Trump’s transition team on energy issues, despite admitting he had never spoken to Trump, and is known for spreading climate science denial. [18]

Paterson signed a letter to the BBC complaining about its coverage of the Brexit referendum. The letter argued the BBC was biased to the “remain” side of the campaign. [19], [20]

Paterson declared his support for Andrea Leadsom in the Conservative party leadership contest following David Cameron’s resignation. Both Paterson and Leadsom have strong ties to a trans-Atlantic network of individuals and groups spreading climate disinformation and pushing for Brexit. [21]

Signed a letter calling for the UK government to delay setting a target for its fifth carbon budget, as required by the Climate Change Act, as it would hurt the UK’s international economic competitiveness. [22]

Paterson declared his intention to campaign for Brexit alongside brother-in-law and GWPF advisor Matt Ridley as part of the Business for Britain group. [23]

Shortly after being sacked from government Paterson delivered the annual lecture for climate science denial campaign group, the Global Warming Policy Foundation, which it was later revealed was partly written by brother-in-law and GWPF advisor Matt Ridley. [6], [7]

Paterson met with the bosses of a number of oil and gas companies interesting in fracking in the UK. The Department of Environment, Food, and Rural Affairs (Defra) decided to withhold an internal briefing it prepared for Paterson in advance of the meeting. [24]

According to his profile at his website, Paterson has held the following positions: [2]