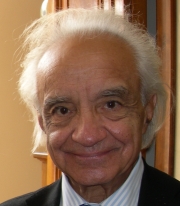 Antonino Zichichi is an Italian physicist who specializes in the area of nuclear physics. He was president of the Istituto Nazionale di Fisica Nucleare from 1977 up to 1982 and is currently an emeritus professor of physics at the University of Bologna. [2]

He has also been a leading scientist with European Organization for Nuclear Research (CERN), and the Geneva Founder of the World Laboratory. [3]

He is the co-founder and president of the World Federation of Scientists (WFS), which he helped form in 1973. [4]

WFS is an organization concerned with the fight against planetary emergencies, but also appears to have opened a “Permanent Monitoring Panel” on Climatology run by Canadian climate skeptic Christopher Essex. [5]

Zichichi is on Senator James Inhofe‘s list of “400 + scientists” who dispute man-made global warming as one of 49 who are currently retired. [6]

“[I]t is not possible to exclude the idea that climate changes can be due to natural causes. [It is plausible that] man is not to blame.” [7]

“[The IPCC] has led the public to believe – as said before – that Science has understood all about Climate. If that was true, climatologically, the destiny of our planet should be free of uncertainties and under the rigorous control of Science. But it’s not this way.”

“The conclusion is that years of work and strong financial support are needed in
order to improve the theoretical formulation of the problems and the corresponding experimental worldwide observations.” [8]

Zichichi is one of 16 scientists who appended their signatures to a Wall Street Journal Op-Ed titled “No Need to Panic About Global Warming.”

Media Transparency also examined Op-Ed and concluded that most of the scientists have never published articles in peer-reviewed journals on the subject of climate change. They also contacted economist William Nordhaus who said that the WSJ was guilty of a “Complete Mischaracterization Of My Work.” [12]

Signatory to an open letter to the UN Secretary-General Ban Ki-Moon that describes global warming as a natural phenomenon.

The letter describes carbon dioxide as a “non-polluting gas that is essential to plant photosynthesis,” and claims that the IPCC‘s reports are “inadequate as justification” for implementing climate change policy. [1]

Spoke at a conference sponsored by the Pontifical Council for Justice and Peace titled “Climate Change and Development.”

During the conference Zichichi made the assertion that human activity has less than a 10% impact on the environment, and said he was not convinced that global warming is caused by the increase of emissions of greenhouse gases produced through human activity. He also said climate changes depended significantly on the fluctuation of cosmic rays. [7]

Note that this is a common argument used by skeptics, according to examination by SkepticalScience.

The National Post covered the conference, and had this to say about Zichich’s presentation:

“The man most responsible for quelling any potential call to action is one of the Vatican’s own, Antonino Zichichi, a member of the Pontifical Academy of Sciences. Dr. Zichichi, who made the seminar’s most powerful presentation, set its tone. It amounted to a damning indictment of the UN‘s Intergovernmental Panel on Climate Change, the body responsible for most of the dire warnings that the press reports daily.” [13]

According to a search of Google Scholar, Zichichi has never published in a peer-reviewed journal in the area of climate science.

Other sources mention that he has published over 1000 articles in journals, primarily in the area of physics.