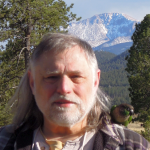 Robert (Bob) E. Armstrong is a self-described “bleeding heart libertarian,” the owner of CoSy.com, a computer programming company, and the previous drug affairs director of the Manhattan Libertarian Party. [1]

According to his C.V. and the Heartland Institute, he spent the 1970s obtaining his Masters degree “studying visual psychophysics at Northwestern University … hanging out with the math and computer people.” [2]

Bob Armstrong has worked for companies such as Xerox, in Rochester, NY, and Rochester Gas and Electric, rewriting their respective systems in APL (array programming language). [1] , [2]

In a section of his website titled “Planetary Temperature,” he provides resources on modeling the planet in APL and “how to calculate the temperature of a radiantly heated colored ball (like our earth).”  Armstrong “contends that a rather detailed model of the planet can be written in a few pages of succinct APL definitions far more scrutable than the million line FORTRAN programs still used by climate scientists.” [4], [2]

Armstrong briefly ran as a Libertarian Party candidate for the 8th congressional district of New York before stepping out of the race. [17], [18]

Bob Armstrong was a signatory of the infamous Oregon Petition, a document initially created by  Art Robinson and his organization the Oregon Institute of Science and Medicine, along with the Exxon-backed George C. Marshall Institute in 1998. [8]

The petition and the documents included were all made to look like official papers from the prestigious National Academy of Science. They weren’t, and this attempt to mislead has been well-documented. [9]

“The anti-science global statist ‘AlGoreWarming’ cult is second only to traditional economic Marxism in its destructivenes of human and ecological welfare .

“The ~ 33c warmer our surface is than what we absorb from the sun is trivially due to gravity .

“A particle moving up slows down , cools ; moving down speeds up , warms . Newton’s same law which explains why satellites in low orbit must go faster than those in higher QUANTITATIVELY explains the temperature profiles of all planets and their atmospheres whatever their composition .

“This relationship as understandable as an apple falling on your head is absent from the therefore equationless GHG paradigm – in defiance of conservation of energy .”

Armstrong described himself on his Meetup profile for the El Paso County chapter of the Libertarian Party:[3]

“I’m a bleeding heart Libertarian with particular understanding of the nonscience of the CO2 global warming fraud.” [3]

“What our restoring a little of the carbon from previous lush epochs is doing is speeding the respiration of the biosphere .The inevitable compensation for our returning some carbon to the biosphere is an increase in green plant growth.” [4]

Further down the page, Armstrong declards:

“The evidence is becoming overwhelming that CO2 does NOT affect mean global temperature. On the other hand, evidence is mounting that it IS making the planet greener. The only real question is if rationality can prevail before the Global Governments do too much harm.” [4]

“Bobby and his fellow watermelons are the ones guilty of crimes against reality .

“Many are outright liars ; masses are innumerate sheeple sucked into the absurdity that the molecule which , married with H2O , enables life is inimical to it . Venerable institutions have lost respect along with their pre-internet paper based fiefdoms .

“These eKo-nazis living on inherited wealth and privilege don’t give a damn about the welfare of the poor for whom energy is a several thousand dollar per year expense . And it’s the Koch’s and their competition who produce that energy as affordably and responsibly they can .

“It is to be expected that the true believers in this historic delusion are the same arrogant , willfully ignorant , progressives who , as the Libertarians aptly put it , submit to the cult of the state . For them to come to terms with the falsehood of this quantitative scientific absurdity is to face the falsehood of their belief in the superiority of the socialist state and the demagogs ( demigods to them ) who seek its power over their fellow citizens . Once again , the god fails .”

“The eco-nazis are willfully , consciously guilty of Crimes against Reality . And they admit it,” Armstrong declared on Facebook. [12]

“CO2 is the ultimate “green” gas. It is a grade school fact that every green tree, every blade of grass, indeed all life is ultimately CO2 + H2O combined by sunlight plus a bit of ash and it is proven in both laboratory and practice that plants thrive on more than twice our current 3 or 4 molecules per 10,000. Life could not have started on earth without a (20%) CO2 rather than O2 atmosphere. Only photosynthesis converted it to an oxygen atmosphere bouncing along the minimal CO2 necessary to keep the plants alive. So any downside to the few percent of the natural CO2 budget we are restoring to our atmosphere from carbon sequestered in previous incredibly lush epochs must be weighed against this indisputable greening of the planet.” [4]

“Bob Armstrong will put the ‘Green New Deal’ in perspective. In case you’ve missed this lately, it’s a plan from the progressive end of the political spectrum that will mean virtually no private transportation, no domestic airlines and who-knows-what-else in the quest for a carbon-neutral USA within 10 years. The big concern, of course, is the often-challenged science (though not by the mainstream media) that underpins global warming to begin with.”

Armstrong described his talk, titled “More Destructive than Stalin’s Kysenkoism” on his own website: [11]

“So what’s the biggest lie one can conceive ?
That the molecule we’re made of is warming the planet a little . Ergo , we need a Global State to reverse the prosperity of the last 2 centuries .

With absolutely NO empirical evidence , indeed a great deal of fraud , and in denial of essential physics ,  the AlGoreWarmists despoil landscapes from horizon to horizon with economically unsustainable specially dispensated avian cuisinarts and other ‘crapitalist’ , ie:  ‘crony capitalist’ , scams .”

View DeSmogBlog’s in-depth research on the other speakers and sponsors from Heartland’s ICCC9.

Armstrong was a Libertarian Party candidate for the 8th congressional district seat in New York, vying to take over the seat of Jerrold Nadler. According to materials on file at DeSmog, he drafted a letter of his intention to run in late 1998. Armstrong later discontinued his campaign and announced he would be working with “Marian Henry , who describes herself as an ‘Ayn Rand’ Republican.” [16], [17], [18]

Armstrong outlined some of his views in campaign fundraising materials: [15]

“At the end of the 20th century , in our US Democracy , the Statist Fallacy has revealed itself in Fraud fronting for Force in the Con Artistry of the Clintons .

“The failure of the State to even fire its Chief Law Enforcement Officer for Lying in Its Court when accused of violating Laws He signed Himself , destroys the State`s claim to Legitimacy .

“At the same time more of our fellow citizens are in prison for State defined “crimes” which effect only themselves , and which tend to require violations of the Bill of Rights to pursue and prosecute.”

According to Google Scholar and Skeptical Science, Bob Armstrong has never published research in a peer-reviewed journal on any subject.