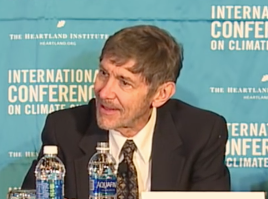 J. Scott Armstrong Ph.D is a marketing professor at the Wharton School of Business at the University of Pennsylvania. According to his website, Armstrong’s work focuses mainly on forecasting methods, strategic planning, survey research, and research methods.

When Armstrong extended “The Climate Challenge” to Al Gore in June, 2007, he based his forecasts on “the naive (no-change) model; that is, the forecasts would be the same as the most recent year prior to the forecasts.”

“We published a peer-reviewed paper showing that the forecasting procedures used by the U.N.’s Intergovernmental Panel on Climate Change violated 72 of 89 relevant principles (e.g., ‘provide full disclosure of methods’). The IPCC has been unable to explain why it violated such principles. In response, we developed a model that follows the principles. Because the climate is complex and poorly understood, our model predicts that global average temperatures will not change.” [3]

“We concluded that there are no scientific forecasts that support long-term global warming, nor any that it would prove dangerous if it occurred, and none showing that cost-effective policies could stop warming. No one has provided evidence to challenge our conclusions. In fact, a leading global warming alarmist has been careful to say that the IPCC does not provide forecasts, only scenarios. In other words, the role of the IPCC is that of a storyteller.” [13]

“I actually try not to learn a lot about climate change.” [16]

Armstrong was among a group of climate change deniers who responded with their own open letter, calling for the AMNH “not to cave in to this pressure.” The letter was signed by numerous individuals with ties to groups funded by the Mercer Family Foundation such as Will Happer of the CO2 CoalitionRichard Lindzen, a fellow at the Cato InstituteCraig Idso, the chairman of the Center for the Study of Carbon Dioxide and Global Change. There are a number of signatories affiliated with the Heartland Institute, which has received over $5.78 million from the Mercer Family Foundation since 2008. [29]

The Heartland Institute awarded a “Lifetime Achievement Award in Climate Science” to J. Scott Armstrong between dinner keynote presentations at the Twelfth International Conference on Climate Change (ICCC12). DeSmog captured audio of Armstrong’s acceptance speech, where he brought up a story on how he had made a visit to the 9/11 museum the previous summer. [25], [26]

“I cry easily,” Armstrong said. “When I got to the part about the firemen […] you know […] that’s their duty. They go in there, and that’s what you guys do.”

In addition to receiving his award, Armstrong also spoke on a Heartland Institute panel on “Climate Politics and Policy” on the first day of the conference: [27]

Scott Armstrong was a signatory of a petition (PDF) organized by Richard Lindzen of the Cato Institute urging President Donald Trump to pull the United States out of the United Nations international convention on climate change (UNFCCC). [23]

DeSmog investigated the list, and found that only a small handful of the signatories could be considered “even remotely ‘qualified’ or ‘eminent’ — but not in the field of climate science.” The list included individuals “interested in climate,” and one signatory who only identified as an “emailer who wished to sign the petition” while some signers provided no affiliation or address whatsoever. [24]

Scott Armstrong is listed as a “Founding Member” of group named Climate Exit (Clexit) led by climate change denier Christopher Monckton. According to Clexit’s founding statement (PDF), “The world must abandon this suicidal Global Warming crusade. Man does not and cannot control the climate.” [19], [20]

Desmog reports on how the group grew in the wake of the UK‘s decision to leave the EU. A key member of Clexit’s “60 well-informed science, business and economic leaders” is Hugh Morgan, a former board member of the Reserve Bank of Australia and former CEO of Western Mining Corporation with close ties to Australia’s Liberal party. [21], [22]

“If the Paris climate accord is ratified, or enforced locally by compliant governments, it will strangle the leading economies of the world with pointless carbon taxes and costly climate and energy policies, all with no sound basis in evidence or science […]” [20]

J. Scott Armstrong was a speaker on Panel 2: “Climate Science and Accurate Data,” at the Heartland Institute’s Tenth International Conference on Climate Change (ICCC10) in Washington, D.C., with Anthony Watts and Roy Spencer. [17]

J. Scott Armstrong published an article in the Washington Times defending himself and fellow climate change skeptic Willie Soon. According to Armstrong, “Other than salaries from our employers, Mr. Soon, co-author Kesten Green and I received no money for our two papers at issue.” [13]

Scott Armstrong is a contributor to the book Climate Change: The Facts published by the Institute of Public Affairs and featuring “22 essays on the science, politics and economics of the climate change debate.” The Institute of Public Affairs, while not revealing most of its funders, is known to have received funding from mining magnate Gina Rinehart and at least one major tobacco company.[14]

The book includes essays and articles from a range of climate change skeptics, with contributors including the following:

According to Editor Alan Moran in a post at Catallaxy Files blog on Climate Change: the facts 2014,  Scott Armstrong and Kesten Green‘s contribution to the book was to “test the predictive validity of the global warming hypothesis and find it wanting. They point out that many other alarms have been raised over the past 200 years, none of which have proved to have substance. Most of the alarms that led governments into taking ac­tions actually created harm and none provided benefits.” [15]

Media transparency found that the Op-Ed had misrepresented the position of Yale economist William Nordhaus. SkepticalScience also did a comprehensive examination of the signatories and found that few of them had published anything in peer-reviewed journal on the subject of climate change. [5], [6]

Armstrong was a speaker at the Heartland Institute‘s Fourth International Conference on Climate Change (ICCC4.) [8]

His speech, titled “Global Warming: A Scientific Forecasting Controversy or a Political Movement?” can be viewed below.

Armstrong’s signature is displayed alongside a full-page ad funded by the CATO institute that appeared in numerous newspapers including the Washington Post, the New York Times and the Chicago Tribune in 2009.

The ad criticizes President Obama’s declaration that “few challenges facing America and the world are more urgent than combating climate change,” stating that “with all due respect Mr. President, that is not true.” It goes on to claim that “there has been no net global warming for over a decade,” and that the dangers of climate change are “grossly overstated.” [9]

A rebuttal of the paper by numerous scientists was published at Interfaces. [10]

Armstrong was a speaker at the Heartland Institute‘s First International Conference on Climate Change (ICCC1) where he gave a speech titled “Strengths and Weaknesses of Climate Models.” [31]

Scott Armstrong, who co-authored a paper with Kesten Green and Willie Soon on polar bears, testified before the Senate Environment and Public Works committee on the subject of climate change:

In June, 2007, Armstrong extended a “Global Warming Challenge” to Al Gore. Although Al Gore declined the bet, Armstrong continued to track the hypothetical outcome on his website theclimatebet.com[11]

Armstrong continues to use theclimatebet.com as a forum to post his research.

Scott Armstrong, Willie Soon, and Kesten Green released an “unpublished working paper” arguing that the current forecast data on polar bear populations is inadequate for making a decision as to whether polar bears should be listed as a threatened species under the US Endangered Species Act.

While the polar bear paper is not published in a peer-reviewed scientific journal, it has appeared on websites such as the Science and Public Policy Institute website, Spiked Online, and various blogs.

His report was critiqued by the science writers at Realclimate.org who accuse Armstrong of having read “none of the primary literature,” only one chapter of the IPCC report and only “an un-peer reviewed hatchet job on the Stern Report” (a 2006 report on the economic impact of global warming completed by the British government). [12]

He also published a more recent paper: with Kesten Green in 2011 titled “Effects of the global warming alarm: A forecasting project using the structured analogies method” (PDF). Although this paper does not appear to be published in a peer-reviewed journal, Green and Armstrong do claim to “seek peer review from others, especially with evidence that would challenge our findings or conclusions.”