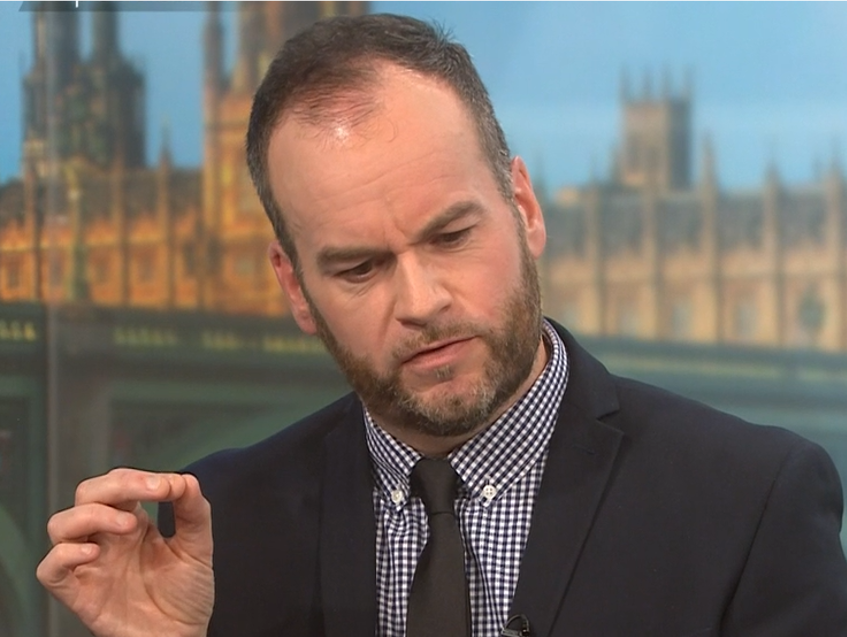 Brendan O’Neill is the editor of Spiked, an online libertarian magazine that aims to “change the world as well as report on it”, according to its website. [1], [2]

O’Neill identifies as a “Marxist Libertarian” and began his career in journalism at Living Marxism, a publication of the Revolutionary Communist Party, a now-defunct Trotskyist group of which he was a member. [3], [4], [5]

O’Neill stayed on at Living Marxism following its rebranding as LM until it was forced to close after losing a libel action brought by the television production company ITN. The magazine had published an article claiming that ITN intentionally misrepresented a photo of Fikret Alic, a prisoner in a Bosnian internment camp. [5]

O’Neill has contributed to The Australian, The Big Issue, and Daily Telegraph, among other publications, and hosts his own podcast series called “The Brendan O’Neill Show”. [6], [7]

He is a speaker and former scholar for the Centre for Independent Studies, a Sydney-based free market think tank, and co-founder of the Manifesto Club, an organisation which according to its website is “at the forefront of challenging the hyper-regulation of public spaces”. [8], [9], [10], [11]

O’Neill is known for his views on freedom of speech and has appeared on a number of platforms, such as at the Oxford Union where he said; “we have got to move beyond talking about a right to offend, we have to talk about a duty to offend”. [12]

He regularly speaks out against what he describes as “climate change alarmism”. [13]

O’Neill wrote an article for Spiked which downplayed the significance of climate change, stating: [30]

“the notion that climate change is an End Times event, rather than a practical problem that can be solved with tech, especially the rollout of nuclear power, is little more than the prejudice of Malthusian elites who view the very project of modernity as an intemperate expression of speciesist supremacy by mankind.”

“Greens rarely think about the devastating consequences of their anti-growth agenda on under-developed parts of the world.”

In The Spectator, O’Neill argued that the Australian Climate Change Authority should be scrapped: [13]

“Climate change alarmism is political to its core. It’s a species of political prejudice, and one of the uglier ones. It’s ideology masquerading as science, or rather using science as a cover for its seemingly unspeakable black heart; which is misanthropy, a feeling of disgust for modern human society and its psychologically immature inhabitants.”

In a Guardian article called “Greens are the enemies of liberty”, Brendan O’Neill said: [14]

“Environmentalism is instinctively and relentlessly illiberal, and it is doing more to inculcate people with fear, self-loathing and a religious-style sense of meekness than any piece of anti-terror legislation ever could. If you believe in freedom, you must reject it”.

“XR is extremist. It’s about as extremist as it gets. It is a deranged, classist, authoritarian outfit that chants and sings about the end of the world and which lies – openly – about billions dying from climate change. It is anti-modern, anti-progress and anti-human”.

“I think a large element of this is religion-replacement. So, the disappearance of the old religion has disorientated many sections of society, that’s absolutely true. And environmentalism feels to me like a new fundamentalist religion”.

In a Spiked article titled “The cult of Greta Thunberg” O’Neill said: [17]

“Refuse to panic, mock the blather about hellfire, and appreciate that mankind’s transformation of the planet has been a glorious thing that has expanded life expectancy, allowed billions to live in cities, and made it possible for even the less well-off to travel the globe. Sin against St Greta.”

O’Neill interviewed former British Supreme Court Judge Lord Sumption on an episode of The Brendan O’Neill Show, published by Spiked, where they discussed the implications of COVID-19 lockdowns. O’Neill argued that established scientific consensus on issues such as COVID-19 and climate change could act as a pretext for the imposition of authoritarian political solutions, stating: “We already see people talking about the possibility of a climate lockdown, which, again, seems to be informed by a notion that there is such a thing as ‘The Science.’” [31]

O’Neill also criticised environmentalists, stating: “Even if you just propose less onerous measures to tackle climate change, you will be told you are not taking the issue seriously and should not have a platform.”

O’Neill wrote an article for The Spectator criticising environmentalists’ attempts to prevent the construction of a new coking coal mine in Cumbria and new six storey building in London for 25 council homes, referring to their actions as an “illustration of the elitism that lurks at the heart of the green movement”. [29]

O’Neill claimed that “environmentalism is objectively anti-working-class. Its obsession with shrinking the ‘human footprint,’ with reining in production and construction and economic growth, leads to fewer jobs for working people and a shrunken economic future in which society will have less leeway to support the populace, especially those who are struggling.”

In an interview with Sky News, O’Neill criticised Prime Minister Boris Johnson’s views on climate change, arguing that he had been “sucked into the conformist political view”, and had “let the power go to his head”. O’Neill also stated that Johnson “used to be quite critical of the excesses of environmentalism and the craziness of some climate change activists and the nonsense of the idea the world is coming to an end”, and had “made some really pertinent criticisms of that kind of miserablist eco-outlook that we’ve seen growing over the past three decades”. O’Neill concluded, “and now that he’s in power, he seems to have become this extreme-green and he wants to get to zero carbon and he wants to lecture Australia about winding down its industry”. [27]

In an article for Spiked entitled ‘COVID-19: a glimpse of the dystopia greens want us to live in’, O’Neill stated that, “when religious crackpots blame floods on gay marriage, claiming God is punishing us for losing the moral plot, we rightly mock them. Yet greens offer merely a secular version of such backward, apocalyptic claptrap”. He concluded that: “Greens really should be careful when they talk about COVID-19 because it won’t be long before more and more people realise that this unpleasant emergency we are living through is just like the warped dystopia greens want to build.” [26]

“And they latch on to everything from bushfires to floods, from plagues of locusts to melting ice-caps, as signs from nature, lessons from a furious Gaia. When religious crackpots blame floods on gay marriage, claiming God is punishing us for losing the moral plot, we rightly mock them. Yet greens offer merely a secular version of such backward, apocalyptic claptrap.”

O’Neill argued that Greta Thunberg should not be TIME Magazine’s Person of the Year saying that she has been “exploited by the green movement”. Speaking to Julia Hartley-Brewer of talkRADIO, O’Neill argued that instead of having a ‘Save the World’ campaign, we need a ‘Save Greta’ campaign. [18]

O’Neill appeared on Sky News Australia to discuss the Extinction Rebellion protests and described the moment commuters dragged a protestor off the roof of a train as “really positive”. He went on to say; “the people have had enough and they’re fighting back”. [19]

On the same day, O’Neill published a piece in Spiked where he celebrated what he called a “rebellion against Extinction Rebellion”. [20]

O’Neill spoke to Mike Graham on talkRADIO about Extinction Rebellion, suggesting that they were an “extremist religious movement”. He also argued that the climate activists were achieving nothing: [21]

“I think the only thing they raised awareness of was how annoying modern-day environmentalists are, I mean these are some of the most irritating people I’ve ever encountered… They achieved nothing beyond revealing that environmentalism as a political ideology has gone a bit crazy”.

He also said the protests were “a middle-class colonisation of London” and that Extinction Rebellion’s claims had no basis in reality: [21]

Speaking on a separate morning to Mike Graham on talkRADIO, O’Neill argued that young climate activists have been indoctrinated: [16]

“These kids have been indoctrinated by their teachers and by politicians with this kind of end of the world ideology, and they’re out on the streets just repeating that back to adults and the adults are giving them a big round of applause. The whole thing is really weird and embarrassing. These kids are not the future”.

He also said: “I think someone needs to say to these kids ‘shut the hell up, get back to school and do your Maths and English homework’”. [16]

O’Neill went on to criticize the protestors for their “misuse of science” by “turning it into a biblical edict that everyone has to obey”. [16]

O’Neill invited filmmaker Martin Durkin onto his podcast show. Durkin was the director of The Great Global Warming Swindle, a documentary film which claimed man-made global warming was a myth and was subsequently deemed by Ofcom as to have broken impartiality guidelines. [22], [23], [24]

They spoke about climate scientists as ‘being completely wrong’ about human caused climate change with O’Neill saying; “greens have been wrong about everything for, I guess you can say, about 200 years if you go right back to Malthus”. [22]

Speaking on his podcast show to Matt Ridley, a climate change sceptic and advisor to the Global Warming Policy Foundation, O’Neill discussed the distrust which surrounds the scientific community. On pesticides, acid rain, over population, the ozone layer, and climate change, O’Neill said: [25]

“One of the things that strikes me is how wrong they have been consistently over the past 50 or 60 years… In each case, the big terrible awful calamity that was predicted, fails to materialise”.