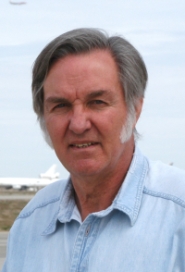 Rutan describes his work with climate science as one of his “Hobbies.” [2]

Burt Rutan is an American aerospace engineer who became famous for designing the Voyager, which was the first plane to fly around the world without stopping or refueling.

He founded the aerospace research firm Scaled Composites in 1982, and announced his plans to retire in April 2011.

He currently serves as Scaled Composites’ Chief Technical Officer and following his retirement, will assume the title of founder and chairman emeritus. [3]

“My study is NOT as a climatologist, but from a completely different perspective in which I am an expert … For decades, as a professional experimental test engineer, I have analyzed experimental data and watched others massage and present data. I became a cynic; My conclusion – ‘if someone is aggressively selling a technical product who’s merits are dependent on complex experimental data, he is likely lying’. That is true whether the product is an airplane or a Carbon Credit.” [2]

“[I] do not hide the fact that I have a clear bias on AGW. My bias is based on fear of Government expansion and the observation of AGW data presentation fraud – and not based on any financial or other personal benefit.” [2]

Rutan is one of 16 scientists who appended their signatures to a Wall Street Journal opinion piece titled “No Need to Panic About Global Warming.” [4]

Media Matters reported on the 16 scientists who signed the Op-Ed, and found that most of them have not published any research in the area of climate science. Many, including Burt Rutan, have experience in fields entirely unrelated to climate science. Numerous other signatories also have connections to the oil and gas industry, or to industry think tanks.

When they contacted the Yale economist cited in the Op-Ed, he replied that it had been a “Complete Mischaracterization Of My Work.” [5]

An article in Forbes  notes that another letter, written by 255 members of the United States National Academy of Sciences, had been submitted to the Wall Street Journal (this letter on the realities of climate change) but had been rejected in favor of the sixteen-scientist letter. [6]

Rutan presented (PDF) at the Experimental Aircraft Association’s EAA Airventure 2009 Oshkosh Conference, partly on the subject of on climate change.

He claimed to present data that proved global warming was false. He also described how “CO2 is plant food, not a pollutant. It’s been 20 times as high as it now. If you have a 1.2 percent increase in cloud formation and precipitation, it offsets a 100 percent increase of CO2 in the atmosphere.” [7]

In his presentation, Rutan describes his “recommendations” as to “Drop the CCC (Climate Change Crisis) and all Cap & Trade legislation. CCC is naive, non-scientific, irrelevant, hopeless and oxymoronic. Its alarmists can use it to destroy US global competitiveness through Cap and Trade taxes.” [2]

According to a search of Google Scholar, both for a “Burt Rutan” and for an “Elbert Leander Rutan,” Rutan has not published any articles in peer-reviewed journals on any subject.

He does hold numerous aircraft patents, however. [1]