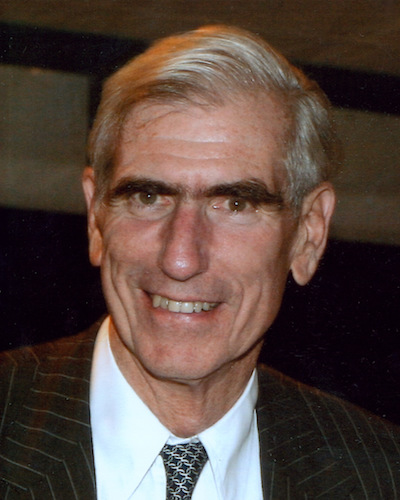 C. Boyden Gray (Clayland Boyden Gray) is an attorney and lobbyist and founding partner at the lobbying firm Boyden Gray & Associates in Washington, DC. He has been a lobbyist for a variety of corporations, including Exelon, First Energy Corporation, Amgen, Geneva Steel, Genzyme, New England Electric System, the Swiss Bankers Association, and Tiger Management. [1], [2]

Gray is the grandson of Bowman Gray, a president of R.J. Reynolds Tobacco Company, and son of Gordon Gray who served as Secretary of the Army for President Truman and national security adviser to President Eisenhower. Gray has been described as a multimillionaire who has had numerous investments in oil partnerships according to disclosure forms from his days of service in government. [2]

According to his profile at Boyden Gray & Associates, Gray worked in the White House for twelve years, first as counsel to the Vice President during the Reagan administration and then as White House Counsel to President George H.W. Bush where he was “instrumental in the enactment of the Clean Air Act Amendments of 1990 and the Energy Policy Act of 1992, as well as the development of a cap-and-trade system for acid rain emissions.” [1]

While working on Clean Air Act revisions in the Bush administration, Gray touted the goal of a “free market” strategy – “the emphasis will be on market incentives to achieve results, getting away from command and control so there is more flexibility, more efficiency” in meeting clean air goals. [2], [3]

C. Boyen Gray was chair of the Environmental Resources Trust (ERT), created in 1997 by the Environmental Defense Fund (EDF). A June, 1999 report by the NonProfit Accountability Project (PDF) detailed Boyden’s role at ERT, and critically examines both ERT and the EDF‘s role in climate change policy. The report comments that “It is disconcerting that Gray chairs ERT while simultaneously chairing Citizen’s for a Sound Economy (CSE), an anti-environmental think tank.” [2]

Gray founded the 501(c)(3) nonprofit Committee for Justice with political strategist Ed Rogers in 2002. The group describes itself as “the nation’s leading conservative voice on judicial appointments and the threat of judicial activism.” It initially served to pressure the Senate into approving President George W. Bush’s federal judicial appointments. [54], [53]

At the time, CSE led a public relations campaign against the Clinton administration’s 1993 energy tax proposal. The Nation reported: “While the Koch Foundations could not legally lobby against the tax, CSE rallied public opposition, especially in Oklahoma, where then-Senator David Boren agreed to help kill the tax.” [7]

In 1995, the Kochs hired Gray to write federal legislation titled the Comprehensive Regulatory Reform Act of 1995 after the Environmental Protection Agency (EPA) had filed a lawsuit against the Kochs over oil spills at Koch-owned refineries. [4]

In 1999, Boyden Gray prepared a CSE-funded amicus brief key to a decision by a U.S. Court of Appeals in Washington that suspended air quality regulations issued by the Clinton-Gore administration in July 1997. CSE said it helped fund Gray’s brief. [4]

At the 1992 Earth Summit in Rio, Gray wrote that he believed more research was needed before action should be taken on climate change:

“[I]t may be that vigorous scientific research into global warming will soon demonstrate the need to act more drastically on greenhouse gases, but this has not happened yet … the immediate need is not climate change.” [2]

“If policymakers are serious about cutting carbon emissions, they should give up heavy-handed mandates and empty promises in favor of policies that promote competition in the energy sector. Alternative fuels like natural gas have already reduced carbon emissions in electricity generation and could do the same in transportation. […]

Consider also nuclear power, which is much less carbon-intensive than coal and fossil fuels.” [8]

“To promote efficiency, federal law broadly forbids state regulations ‘related to fuel economy standards,” Gray wrote.  “Courts have held that this law forbids electric-car quotas and similarly meddlesome command-and-control policies that seek to dictate how car makers should meet federal performance standards. The Golden State argues that a special exception made for California regulations in the Clean Air Act should also be read into the federal fuel-economy law. But that law’s text says no. It forbids fuel-economy regulation by any state—no exceptions.” [55]

C. Boyden Gray defended ExxonMobil in the media after the publication of documents showing that Exxon knew about climate change in the early 1980s while promoting climate denial for the next 27 years.  [9]

“The decision to single out Exxon is especially ill conceived, because when it comes to actual proposals for real legislative action on climate change, Exxon’s advocacy has been indistinguishable from some of the leading environmental organizations,” C. Boyden Gray writes in Forbes magazine.[10]

C. Boyden Gray was part of the lobbying effort against REACH (Registration, Evaluation, and Authorization of Chemicals), a bill put before the European Union which would equire “manufacturers to test industrial chemicals used in the manufacturing process to gather health and safety data,” reported the Wall Street Journal. [11]

Boyden Gray prepared a CSE-funded amicus brief key to a decision by a U.S. Court of Appeals in Washington that suspended air quality regulations issued by the Clinton-Gore administration in July 1997. CSE said it helped fund Gray’s brief. [4]

Writing at The New Republic, Hanna Rosin reported that Gray was a “natural leader” for a new group titled the Air Quality Standards Coalition (AQSC). The group, formed in 1996, came to represent more than 500 members including Texaco, Teneco, Philip Morris, Chevron, and Monsanto. In 1997, AQSC spent $100 million in attempts to combat rules that the EPA estimated would save 15,000 lives a year. [51], [52]

Rosin also noted a relationship between the AQSC and Citizens for Sound Economy (CSE), anther of Gray’s groups, which it used “to carry out the ‘grass-roots’ campaign.” However, the CSE kept a “virtuous distance from AQSC: “We are not a part of the coalition; we do not receive funding from them, and we do not work together,” said Brent Bahler, a CSE spokesman.  [51]

Rosin reported that, despite this, “CSE footprints show up all over the coalition agenda.” For example, she notes that “CSE officials met with coalition members last April to brief them on their $5 million educational campaign on the EPA rules. They got the American Petroleum Institute to agree to match all donations up to $600,000. Keeping up the appearance of a grass-roots effort by employing CSE is in fact crucial to the coalition. ‘NAM has recognized that re environmental issues, while the war will be won or lost in Washington, the battles will take place out there,’ says one member, according to the notes.”  [51]

At the 1992 Earth Summit in Rio, Gray wrote that he believed more research was needed before action should be taken on climate change:

“[I]t may be that vigorous scientific research into global warming will soon demonstrate the need to act more drastically on greenhouse gases, but this has not happened yet … the immediate need is not climate change.”[2]

As a Counsel to President Bush, Gray lobbied against the U.S. support for binding targets in the global warming treaty at the 1992 Earth Summit in Rio. Gray also opposed the President’s attendance at the event.  [2], [12]

During the Earth Summit at Rio, Gray opposed the views of many environmentalists and scientists when he said that “it may be that vigorous scientific research into global warming will soon demonstrate the need to act more drastically on greenhouse gases, but this has not happened yet … the immediate need is not climate change.” [13]

Gray denounced CAFE (Corporate Average Fuel Economy) standards that would improve the overall efficiency of vehicles on the road: “automobile companies cannot produce the kinds of cars that a portion of the public wants – big station wagons, for instance,” he said. He blamed U.S. job losses to the shift of production of large cars abroad, which allowed manufacturers to bypass CAFE standards. [2], [14]

Gray was a member of Reagan’s Presidential Task Force on Regulatory  Relief, which made repealing CAFE standards one of its priorities. Citizens for a Sound Economy was also in opposition to CAFE standards. [2], [15]

Below are some sample publications and speeches from Boyden Gray’s profile at the Federalist Society. [49]