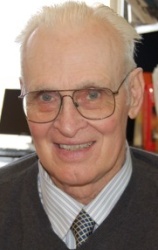 William Gray was a Faculty member of the Department of Atmospheric Science, Colorado State University, Fort Collins, CO from 1961 to 2005. [1]

William Gray was a professor at Colorado State University, where he headed the Tropical Meteorology Project. William Gray passed away on April 16, 2016. [14]

Gray was a regular speaker at the Heartland Institute‘s International Conferences on Climate Change (ICCCs), a venue which gives climate change skeptics from around the world a platform to voice their views. Gray has also described global warming as a “hoax,” and something that “they’ve been brainwashing us [about] for 20 years.” [3]

He appeared in a 2006 video news release sponsored by Tech Central Station titled, “Global Warming and Hurricanes: All Hot Air?” where he denied any connection between the severity of hurricanes and global warming. [15], [9]

Peter Webster, a Georgia Institute of Technology professor, participated in the anonymous peer review on several of Gray’s National Science Foundation proposals. In every case he has turned down the global warming research component because he believed it was not up to standards, but recommended that Gray’s hurricane research be funded.  [2]

Webster, co-authored other scientific papers with Gray, was also critical of Gray for his personal attacks on the scientists with whom he disagreed:

“Bill, for some very good reasons, has been the go-to man on hurricanes for the last 35 years,” says Webster. “All of a sudden there are a lot of people saying things Bill doesn’t agree with. And they’re getting a lot of press—more press than I like, actually. I like the ivory tower. But he’s become more and more radical.” [2]

Writing in a guest post at Watts Up With That, Gray claimed that a number of American Meteorological Society (AMS) members disagreed with the consensus on climate change: [22]

“I am very disappointed at the downward path the AMS has been following for the last 10-15 years in its advocacy of the Anthropogenic Global Warming (AGW) hypothesis. The society has officially taken a position many of us AMS members do not agree with. We believe that humans are having little or no significant influence on the global climate and that the many Global Circulation Climate Model (GCMs) results and the four IPCC reports do not realistically give accurate future projections. To take this position which so many of its members do not necessarily agree with shows that the AMS is following more of a political than a scientific agenda,” Gray wrote. [22]

According to a Denver Post article, Gray recognized that there had been some warming in the past 30 years. [3]

“I don’t question that,” Gray said. “And humans might have caused a very slight amount of this warming. Very slight. But this warming trend is not going to keep on going. My belief is that three, four years from now, the globe will start to cool again, as it did from the middle ’40s to the middle ’70s’.” [3]

Gray added, “They’ve been brainwashing us for 20 years. Starting with the nuclear winter and now with the global warming. This scare will also run its course. In 15-20 years, we’ll look back and see what a hoax this was.” [3]

“I am of the opinion that this is one of the greatest hoaxes ever perpetrated on the American people.” [6]

“I think the whole human-induced greenhouse gas thing is a red herring. […] I see climate change as due to the ocean circulation pattern. I see this as a major cause of climate change. […] These are natural processes. We shouldn’t blame them on humans and CO2.” [4]

According to an article at Rocky Mountain News, William Gray, called noted Boulder climate researcher Kevin Trenberth “an opportunist and a Svengali who ‘sold his soul to the devil to get (global warming) research funding’.” [5]

While Trenberth argued that hurricanes and storms could be getting more severe due to global warming, Gray argued that there was no evidence for the connection and that “everything he (Trenberth) has shown can be refuted.”

“Gore believed in global warming almost as much as Hitler believed there was something wrong with the Jews.” [6]

In a BBC News “Viewpoint,” Gray was quoted:

“Human kind has little or nothing to do with the recent temperature changes. We are not that influential” [7]

William Gray was a speaker at the Heartland Institute’s Ninth International Conference on Climate Change (ICCC9) in Las Vegas, Nevada. He appeared on a panel where he claimed that the CO2 influence on climate change was “minor” while climate change was “controlled by [the] ocean. [12]

View the panel discussion here, Gray’s PowerPoint presentation, as well as his appearance on the following Q&A Panel with William Kininmonth and Roy Spencer. Videos below. [17], [18]

DeSmogBlog has done in-depth research on the other speakers and sponsors from Heartland’s ICCC9. [16]

Gray was a speaker at the Heartland Institute‘s 7th International Conference on Climate Change (ICCC7). His talk was titled “Why Computer Models Overestimate Global Warming. Download the PowerPoint presentation here. Gray also prepared a paper for the conference titled “The Physical Flaws of the Global Warming Theory and Deep Ocean Circulation Changes as the Primary Climate Driver.”  [19]

DeSmogBlog researched the co-sponsors behind Heartland’s ICCC7 and found that they had collectively received over $67 million from ExxonMobil, the Koch Brothers and the conservative Scaife family foundations. [20]

Gray was a signatory to a 2007 open letter to UN Secretary General Ban Ki-Moon that denied man-made climate change. The letter states that “it is not possible to stop climate change, a natural phenomenon that has affected humanity throughout the ages.” [8]

Gray appeared in a video news release produced by the PR firm Medialink Worldwide and sponsored by Tech Central Station titled, “Global Warming and Hurricanes: All Hot Air?” Gray denied a link between global warming and the severity of hurricane seasons. “We don’t think that’s the case,” Gray says. “This is the way nature sometimes works.” See video below. [9]

Gray testified before the U.S. Senate Committee on Environment & Public Works (run by ranking member James Inhofe) on the subject of climate change. Here is an excerpt from Gray’s testimony: [10]

“I am convinced that in 15-20 years, we will look back on this period of global warming hysteria as we now look back on so many other popular, and trendy, scientific ideas – such as the generally accepted Eugenic theories of the 1920s and 1930s that have now been discredited. There are so many other more important problems in the world which need our immediate attention. We should not be distracted by a false threat that is mostly just due to natural changes in climate.”

Gray concludes that “Analysis of global tropical cyclone activity of all intensities does not support the hypothesis that there has been a significant increase in tropical cyclone frequency-intensity associated with global temperature rise.” [10]

According to a SkepticalScience review of “peer-reviewed papers by William Gray that take a negative or explicitly doubtful position on human-caused global warming,” there are no papers meeting that definition. [21]