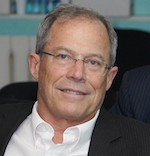 Chris De Freitas was an Associate Professor at the School of Geography and Environmental Science, University of Auckland. De Freitas passed away in 2017 after a two year struggle with cancer. [1], [11]

According to his profile at the University of Auckland, De Freitas previously worked as the Deputy Dean of Science and Head of Science and Technology at the Tamaki campus, and also worked for four years as Pro Vice Chancellor. His positions include former Vice President of the Meteorological Society of New Zealand, Vice President of the International Society of Biometeorology and is co-founder of the Australia New Zealand Climate Forum. For 10 years he was an editor of the Climate Research journal. [1]

During his time as editor, Climate Research was the source of some controversy when papers were published that led several editors to resigned in protest, pointing to the journal’s flawed peer review process. Mother Jones reported that one such article was written by climate change deniers Willie Soon and Sallie Baliunas, which concluded “the 20th century is probably not the warmest nor a uniquely extreme climatic period of the last millennium.” [12]

“’I do not dispute that the carbon dioxide rise in the atmosphere is largely from the use of fossil fuels,’

‘No doubt rising carbon dioxide could “change the climate”. The basic physics is there to support this view. But where is the evidence that the putative change would be large or damaging?’

‘It is unlikely that the man-made changes are drivers of significant climate variation,’ he wrote in 2007. As far as he’s concerned the climate has always changed – naturally. And the fact that global carbon dioxide emissions last year rose by a record amount to almost 31 billion tonnes is neither here nor there.” [2]

“I am not a global warming sceptic. I accept that rising human-caused CO2 from fossil sources could ‘change the climate’. The basic physics is there to support this view. But where is the evidence that the putative change would be large or damaging?” [7]

De Freitas was a speaker at the Heartland Institute‘s fourth International Conference on Climate Change in Chicago. [19]

His speech, titled “Influence of the Southern Oscillation of Global Temperature” can be viewed below.

Chris de Freitas was listed as a speaker at the Heartland Institute‘s “Pac-Rim Conference on Climate Change.” [13]

His speech, titled “Developments in Climate Science: Potential Drivers of Emissions Policy Beyond 2012” can be viewed below.

As a former editor Climate Research, de Freitas was involved in a controversy surrounding a research article co-authored by Sallie Baliunas and Willie Soon. The article reviewed previous scientific papers and came to the conclusion that the climate hasn’t changed in the last 2000 years. [4], [14]

Thirteen of the authors that had been cited in the paper by Baliunas and Soon refuted the interpretation of their work.  Among the sharp criticisms of the Climate Research paper was one from Michael Mann, director of the Earth System Science Center at Penn State University. When von Storch, then the journal’s editor, read Mann’s critique, he said he realized his journal should never have accepted the study: “If it would have been properly reviewed, it would have been rejected on the basis of methodological flaws.” Shortly after, Von Storch, along with two other members of the Climate Research editorial board resigned in protest—“they submitted flawed research,” Von Stroch stated at the time. [5]

“And at least three scientists who were on the journal’s peer-review panel–Wolfgang Cramer, Tom Wigley and Danny Harvey–have complained that de Freitas has published papers they have deemed unacceptable without notifying them.” [6]

After the controversy a more extensive version of the research was published in Energy and Environment, operated by Sonja Boehmer-Christiansen. Senator James Inhofe used the article as proof that climate change is caused by natural variability rather than human activity. [15]

DeSmog has described how de Freitas opened the door for papers by a set of people mostly listed in this directory. They’d never published in CR before he arrived and they essentially disappeared after von Storch resigned. [16]

According to a search of 22,000 academic journals, de Freitas has published over 40 research articles. A full list of his publications is available at the University of Auckland. [1], [17]