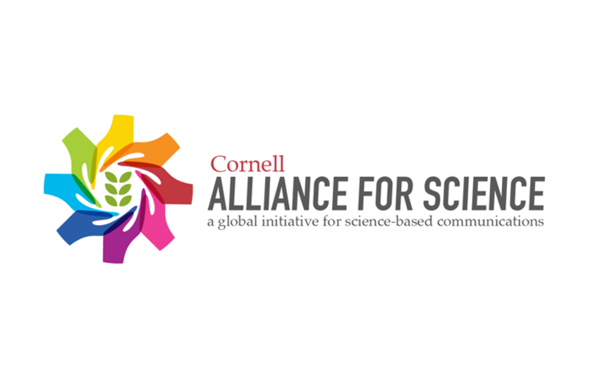 Cornell Alliance for Science describes itself as “a global communications effort that promotes evidence-based decision-making in agriculture.” [1]

The organisation is based in the Department of Global Development within Cornell University’s College of Agriculture and Life Sciences. It was launched in 2014 with a grant from the Gates Foundation. [2], [3]

It says it is building a network of “science allies” globally, who share the Cornell Alliance for Science’s “commitment to solve complex global hunger issues by leveraging advances in agriculture, including biotechnology.” [4]

Critics such as nonprofit investigative research group US Right To Know (USRTK) have described it as “a public relations campaign … to promote genetically engineered foods and pesticides” and “an aggressive propaganda tool for corporate biotech and agribusiness”.[5], [6] Responding to questions from DeSmog for an investigation into the pesticide industry’s marketing campaigns, the alliance maintained  that “of course, we are not an ‘agribusiness organization’ but a communications and training initiative based at a US University, so we don’t do ‘marketing.’” [22]

MP for North Shropshire Owen Paterson, who has links to groups that have spread disinformation on climate science including the UK’s Global Warming Policy Foundation (GWPF), and US groups The Heritage Foundation and Competitive Enterprise Institute, spoke at Cornell Alliance for Science in 2015. He gave a talk called “Check Your Green Privilege: It’s not environmentally friendly to allow millions to die” where he spoke strongly in favour of Genetically Modified (GM) technology. [7], [8]

In 2016, a joint letter signed by 67 New York State organic farmers was sent to Cornell College asking them to evict the Alliance for Science because its “biased presence impedes objective discussion of biotechnology on campus.” [9], [10]

In a post on the group’s website it says: “Plants occupy a unique nexus when it comes to climate change. On the one hand, they can help prevent climate change by capturing carbon. On the other, the cultivation of plants – better known as agriculture – has a large carbon footprint. The changing climate is also going to drastically shift where we can and should grow food.” [11]

In another article it says that people living in the Global North “can reduce their carbon footprint by limiting consumption of animal products, while an international focus on adaptive practices can help build more resilient communities.” The group also adds that another solution to the impacts of climate change can be to “use the tools of genetic engineering to breed climate smart crops and the science of synthetic biology to unlock new food options”, if used in conjunction with reducing carbon emissions. [12]

The group lists five ways CRISPR can “be used to engineer hardier crops that fix more carbon and help to reduce greenhouse gas emissions related to agriculture.” This includes engineering most robust crops that the group says gives two options: first, “more native land to farmland through deforestation or the draining of wetlands, compounding the problem”, or choosing to engineer plants that can “handle harsher conditions.” [11]

It says CRISPR can also be used to combat climate change by engineering food that lasts longer on shelves to reduce food waste, engineering plants to produce less methane as well as fix more carbon. It argues that, “innovations in industrial manufacturing helped put us in this climate quandary” and says that innovations in biology, such as CRISPR can “help us weather it by putting plants on the front line.” [11]

Cornell Alliance For Science says other ways to combat climate change are to engineer plants to produce bacteria that can “take nitrogen from sources not accessible to plants and convert it into forms that plants can digest.” Alternatively, it suggests engineering “soil microbes so that they are less selective of their plant hosts.” [11]

Cornell Alliance for Science published an article on its website about a study published in the August 2019 issue of the Transgenic Research journal about how the “world needs plant breeding innovations to effectively address challenges associated with climate change and a growing population”. The article quotes Dr. Rose Gidado, deputy director of the National Biotechnology Development Agency in Nigeria, who says that growing GMO crops will help farmers to increase their yields, have better protection from insects as well as provide improved tolerance to heat and drought. “GMOs can also help conserve soil energy, reduce greenhouse gases, minimize use of toxic pesticides and protect soil fertility and natural resources” the article says. [13]

In a 2018 post on Cornell Alliance for Science’s website by Joshua Raymond Muhumuza, from the Uganda Biosciences Information Center, says that “agricultural biotechnology provides a particularly promising set of tools for environmental sustainability.” [14]

“Biotech crops, such as those genetically modified to confer pest resistance and herbicide tolerance, are already helping to reduce emissions. Aggregated carbon sequestration benefits from reduced fuel use and additional soil carbon storage from biotech crop adoption between 1996 and 2015 were equal to about 26.7 billion kg — equivalent to taking nearly 12 million cars off the road for a year.” [15]

In 2019, Pacifique Nshimiyimana, an Alliance for Science Global Leadership Fellow, expressed the importance of technology in farming, writing[16]

In 2016, the U.S Agency for International Development gave Cornell University $4.8 million to support BT Brinjal, a GMO eggplant, and incorporate it in Bangladesh; this was project-managed by Cornell Alliance advisory board member, Anthony Shelton. The university published a press release stating that the crop had increased yields, despite reports of major BT Brinjal failures by UBINIG, a Bangladeshi policy and activist group. [18]

Cornell Alliance for Science says it also receives grants and donations from numerous entities and individuals. The website lists those that have donated $1,000 or more as: [19]

The Alliance has a goal of raising $10 million by 2020 which they say is to “support our global efforts to ensure broad access to agricultural innovation.” [20]

The group is part of the Department of Global Development within Cornell University’s College of Agriculture and Life Sciences. [2]

The Cornell Alliance had ties with agriculture giant Monsanto (now part of Bayer) and has defended the company’s right to use the herbicide glyphosate.

A 2017 post on the Cornell Alliance for Science’s website titled “Europe still burns witches – if they’re named Monsanto” by Visiting Fellow Mark Lynas about glyphosate being re-approved for use in the EU says that “this was never about glyphosate as a chemical,” arguing that critics objected to the company. [21]

The Cornell Alliance’s director, Dr Sarah Evanega, has said: “we do not write for the industry, and we do not advocate or promote industry-owned products”. [5]

However, a number of FOIA-obtained emails by USRTK show Evanega and the group coordinating closely with companies working in the field of agriculture. For example, in 2017 Evanega worked with Monsanto’s Cami Ryan to organise a series of workshops aiming to promote genetically engineered foods. The Director also served on the working group of the UC Davis Institute for Food and Agricultural Literacy alongside staff members from Monsanto. According to USRTK the group co-hosted a boot camp to “train scientists and students to promote and defend GMOs and pesticides.” [5]

The Alliance subsequently described the USRTK investigation as a “witch hunt”. [6]

Two members of Cornell Alliance’s advisory board, Pamela Ronald and Anthony Shelton, have also been recruited by Monsanto or Monsanto partner groups, with the latter writing a pro-GMO paper following an email suggestion to author the paper from Eric Sachs, a Monsanto Outreach Lead. [5], [18]