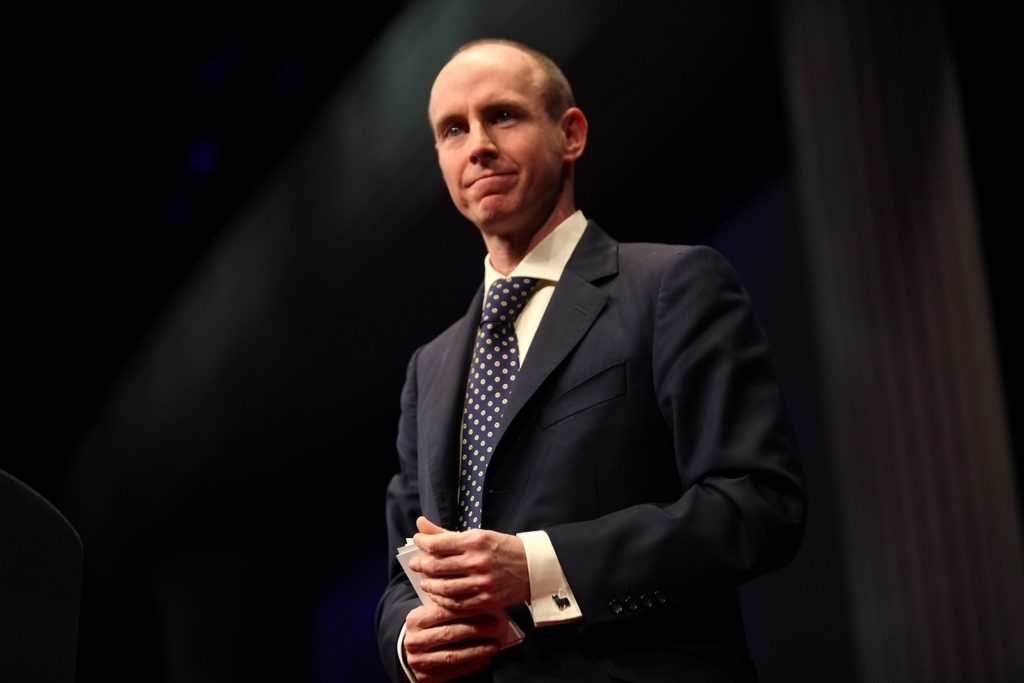 Daniel Hannan was the Conservative MEP for South East England from 1999 until the UK‘s withdrawal from the EU in January 2020. [2]

Hannan is known for his hardline anti-EU views, having helped found both the European Research Group of Eurosceptic Conservative MPs in the 1990s and the Vote Leave campaign. [3], [4]

He is also the founding president of the Initiative for Free Trade, a thinktank based until 2018 at 57 Tufton Street which promotes “the moral case for open commerce” and has pushed for a UK–US free trade deal post-Brexit. [5], [6], [7], [8]

In February 2020 Hannan was reported to be under consideration to receive a peerage from Boris Johnson and was made a Lord at the end of the year. [25], [26]

Hannan has spoken at events organised by the conservative, climate-science-denying US thinktank, the Heritage Foundation, and has ties to a trans-Atlantic network of groups and individuals spreading climate disinformation and supporting the UK’s exit from the EU and Donald Trump’s presidency. [9], [10]

DeSmog reported in November 2018 that Hannan was working with a number of prominent Brexit supporters to set up a “Museum of Communist Terror” to highlight the crimes and failures of Communist regimes. The group includes Viscount Matt Ridley, an adviser to the climate science denying Global Warming Policy Foundation and Eamonn Butler from the Adam Smith Institute. Chloe Westley, formerly of the TaxPayers’ Alliance and Vote Leave, and a special adviser to Prime Minister Boris Johnson, was previously listed as a Director. [11], [27], [28]

Hannan was president of the Young Britons’ Foundation, a self-described “Conservative madrasa” whose executive director has called global warming “a scam.” The YBF closed in 2016 following the suicide of a young Conservative activist whose father described the organisation as a “cult.” The group had close ties with US conservative organisations such as the Young America’s Foundation. [12], [13], [14]

Hannan is listed on the Companies House website as a director of the free-market Cobden Centre, co-founded by former Brexit minister and European Research Group chairman Steve Baker. [15]

Hannan was also listed as a director of Project Maja from July to August 2015 in Companies House records. The company’s registered address was 55 Tufton Street, the home of many of the UK‘s most prominent free-market thinktanks, including the climate science denial group, the Global Warming Policy Foundation. Project Maja was dissolved in December 2016 without ever filing accounts or officially declaring its Nature of Business. [16], [17]

In September 2020, Hannan was appointed to the Government’s “Board of Trade,” advising Secretary of State Liz Truss on the negotiation of new agreements with countries such as Australia. [30]

Commenting on Boris Johnson’s decision not to join other British political party leaders for the climate change debate hosted by Channel 4 during the general election, Hannan tweeted: [29]

“Boris is quite right to decline Channel 4’s summons. Why the hell should he allow the agenda to be set by people who hate him? [29]

“Let’s accept what seems to be the consensus that the world is warming partly as a result of human activity. How we then deal with that is a political rather than a scientific question. And the particular issue is how much we spend on seeking very slightly to mitigate the rise in temperatures with huge sums of money versus adapting with a fractional sum of money. [18]

“I look around the world and I see that in Helsinki the mean temperature is about five degrees, in Athens it is about 21 degrees, in Rio it’s about 35 degrees – all support large populations. I think we might just be able to adapt.” [18]

On the outcome of EU referendum, the US election and the implications for trade deals, Hannan told the Heritage Foundation: [19]

“There are some crybabies on both sides of the Atlantic who don’t accept the verdict of the people as final […] it’s the slightly spoiled millennials, the generation of the safe spaces and micro-aggressions […] it was entirely in their minds about ‘am I a nice cosmopolitan, outwards-looking person, or am I an evil bigot?’” [19]

Hannan spoke alongside Liz Truss and Shanker Singham at a fringe Conservative Party Conference event hosted by the US think tank Heritage Foundation. The talk, “UK Free Trade After Brexit: The United States and Beyond”, was chaired by Ted Bromund, a research fellow at the Foundation, who told the Party Conference in 2016 that the UK’s climate policy, “exists entirely to make yourself feel good about yourselves”.

Speaking at the online event, Hannan argued that: “forming against us is a coalition of all sorts of people who don’t like trade, don’t like capitalism, who don’t like America (or certainly don’t like Trump’s America) don’t like meat, don’t like the modern market economy.” Hannan continued that “added to them are lots of perfectly well-meaning people, genuinely good, sincere, moderate people, altruistic people, who think that they’re doing their bit to reduce food miles or improve the environment or support our farmers or whatever it is.” [31] [32]

Hannan was appointed to the Government’s “Board of Trade,” advising Secretary of State Liz Truss on the negotiation of new agreements with countries such as Australia. [30]

Hannan wrote an article for The Telegraph criticising Extinction Rebellion, which he described as a “profoundly illiberal, anti-democratic and misanthropic movement,” and a “medieval religious cult.” [33]

Hannan wrote an article in the Washington Examiner criticising the school climate strikes, writing: “The young protesters evidently believe that they are Virtuous People marching against Evil People.” [20]

The group of MEPs Hannan leads in the European Parliament was forced to repay €535,000 in EU funds after an investigation found the Alliance of Conservatives and Reformists in Europe grouping had spent large sums of money on luxury events with little apparent relevance to the EU, The Guardian learned. [21]

Hannan founded a campaign to launch a “Museum of Communist Terror,” which, according to its website, aims to “keep alive knowledge and understanding of the deaths, terror and economic failure that took place under Communist regimes, primarily in the 20th century.” Other figures involved in the initiative included Chloe Westley, a former campaign manager for the Taxpayers’ Alliance, Adam Smith Institute Co-Founder Eamonn Butler, and coal baron and climate “lukewarmer” Matt Ridley, who joined the museum as honorary President. [34] [35]

The Guardian revealed Hannan’s Initiative for Free Trade had been overseeing “shadow trade talks” with other UK and US libertarian groups, including the Koch-funded Heritage Foundation and Cato Institute, in a drive to remove EU safety standards on food and drugs through a UK–US free trade deal. [22]

Hannan spoke at an event for the anti-regulation US thinktank, the Heritage Foundation. Speaking at the think tank’s offices in Washington D.C., about a post-Brexit US–UK trade deal Hannan told the audience: “If it’s good enough on your side of the Atlantic it’s good enough on ours,” adding that “in reality of course the deal is unlikely to be done just by Heritage and me,” drawing laughter from the crowd. [19]

A selection of articles by Hannan, published in The Telegraph and the Washington Examiner, can be found below: