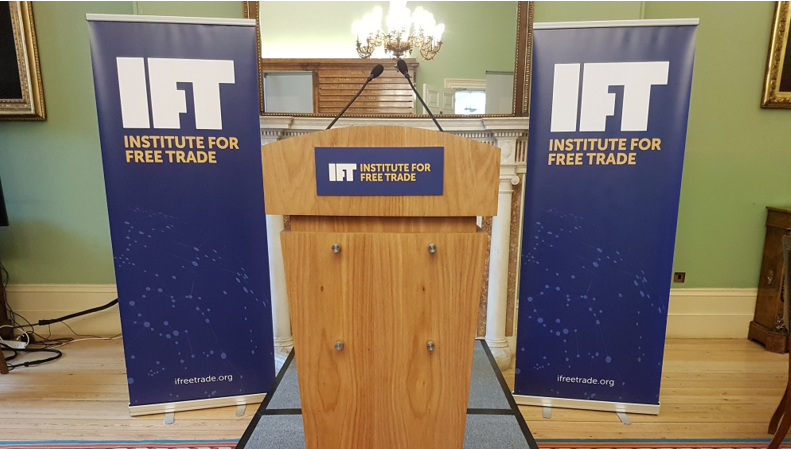 The Initiative for Free Trade is a Eurosceptic thinktank that advocates “the moral case for open commerce” and sees Britain’s withdrawal from the European Union as a “unique opportunity to revitalise the world trading system.” [1], [2]

It was originally established as the Institute for Free Trade in September 2017, with a launch in the British Foreign Office led by then Foreign Secretary Boris Johnson and Trade Secretary Liam Fox. Johnson came under fire for waiving the usual £6,000 fee for use of the venue, with senior civil servants criticising the move. [3], [4]

It was forced to drop the word “institute” from its name after an inquiry by Companies House, with all references to “institute” removed from its website. It is now officially registered as IFT Ltd, having previously been registered as the Initiative for International Trade Ltd. [5], [6]

The IFT‘s president is a former Conservative MEP and Brexit campaigner Daniel Hannan, who has spoken about fostering greater ties between post-Brexit Britain and America at events hosted by US thinktank the Heritage Foundation, a US thinktank known for opposing climate action and environmental regulations that was at the heart of Donald Trump‘s transition team in the weeks before he became president. [2], [7]

The IFT was formerly based at 57 Tufton Street, sharing an office with the Centre for Policy Studies, which has previously been a strong critic of renewable energy, and next door to many of the organisations DeSmog UK previously revealed to be at the heart of a UK climate science denial network in 55 Tufton Street. [8], [9]

In February 2020, it moved its address to the office of a Birmingham accountancy firm run by Saqib Bhatti, newly elected Conservative MP for the West Midlands constituency of Meriden. [8]

In February 2020 Hannan was reported to be under consideration to receive a peerage from Boris Johnson and was made a Lord at the end of the year. [10]

IFT President Daniel Hannan has frequently downplayed the threat of climate change while Board Member Peter Lilley and Advisor Tony Abbott have both opposed climate action. [12], [13], [14], [15]

In 2018 the IFT published a “blueprint” for a deregulatory US–UK free trade deal in 2018, in partnership with the US-based libertarian thinktank the Cato Institute, where it advocated the removal of key environmental policies including the use of the “precautionary principle.” [16]

In November 2019, IFT researcher Barney Trimble welcomed plans for the “Agreement on Climate Change, Trade and Sustainability,” a trade agreement proposed by the Governments of New Zealand, Iceland, Fiji, Costa Rija and Norway which, among other provisions, would include a commitment to eliminate fossil fuel subsidies. [17]

The IFT’s website says that it is a “private, not-for-profit, non partisan research organisation” that is funded by “donations and grants from private individuals, commercial and non-commercial organisations” as well as “publication sales and conferences.” [2]

The IFT has previously refused to disclose its funding sources. When asked by a journalist from the Independent, a spokesperson said: [18]

“The majority of our income comes in the form of donations from private individuals. [18]

“As an organisation promoting free trade, we exist to reject corporatism and special interests: as such, our research is not inspired by our funding; our funding is inspired by our research. As a private company limited by guarantee, we have agreed to protect the privacy of our donors, and their families.” [18]

IFT President Daniel Hannan was a Conservative MEP for South East England from 1999 until the UK’s withdrawal from the EU in January 2020. In the 1990s he helped to found the European Research Group (ERG) of Eurosceptic Conservative MPs which campaigned for Prime Minister David Cameron to hold a referendum on the EU and, after the referendum, became a powerful “party within a party” pressuring then Prime Minister Theresa May to deliver a “hard” Brexit. Hannan was also one of the founders of Vote Leave, the official pro-Brexit campaign. [19], [20]

Abbott has repeatedly denied mainstream climate science and has given speeches to the Australian thinktank, the Institute of Public Affairs, as well as the UK’s Global Warming Policy Foundation. [21], [22]

The IFT announced it had been invited to participate in the Government’s new Trade and Agriculture Commission, launched by International Trade Secretary Liz Truss.

Alongside the announcement, the IFT wrote: [23]

“From increased export opportunities and reduced costs of inputs, UK agriculture can expect to gain from free trade agreements. With Flag of United Kingdom products valued for their high quality, the sector is already becoming more competitive, and trade liberalisation will accelerate this. [23]

“IFT is also committed to ensuring that our own economy is open. Free trade means not arbitrarily discriminating against foreign products, and as the UK establishes itself at the WTO – an organisation founded on this principle – the UK must join those leading by example.” [23]

The Trade and Agriculture Commission was criticised for the make-up of its membership, which included two members of the pro-deregulation thinktank, the Institute of Economic Affairs, and only one representative of an environmental organisation. [24]

The IFT moved its address to the office of a Birmingham accountancy firm run by Saqib Bhatti, newly elected Conservative MP for the West Midlands constituency of Meriden. [8]

The IFT launched a “blueprint” for a US–UK free trade deal that “would see the NHS opened to foreign competition, a bonfire of consumer and environmental regulations and freedom of movement between the two countries for workers,” the Guardian reported. The text of the deal was drawn up by the IFT and the libertarian US-based thinktank, the Cato Institute, which has received significant funding from the oil billionaire Koch brothers and ExxonMobil, while lobbying strongly against action to reduce emissions.

The proposal was drafted in collaboration with numerous other free market thinktanks on both sides of the Atlantic, many of which have spread misinformation about climate science over the years. They include the Institute for Economic Affairs, the Adam Smith Institute, the Heritage Foundation, the American Enterprise Institute and the Competitive Enterprise Institute. [16]

The IFT drops the word ‘institute’ from its name after an investigation by Companies House. Use of the word ‘institute’ in an organisation’s title is protected by law and reserved for those “that typically undertake research at the highest level, or are professional bodies of the highest standing”. Companies House and the business secretary must give permission for it to be used. [5]

The IFT held its inaugural Global Trade Summit in London. Matt Ridley chaired a panel entitled “the best ideas in economics” where Mark J Perry, a scholar at the DC-based thinktank the American Enterprise Institute participated. [25]

Writing in the International Business Times ahead of the summit, Daniel Hannan said: [26]

“Free trade is what lifted us above the run of nations and, in the process, lifted others. It is one of those delightful things – along with smiles and kisses – that enriches both parties. It is time we recovered our global vocation. [26]

The IFT was launched at the Foreign Office by foreign secretary Boris Johnson and trade secretary Liam Fox. Both have links to a transatlantic climate disinformation network. Also in attendance were journalists from the the Times, the Sun, theTelegraph and the Spectator, as well as the editor of BrexitCentral, Jonathan Isaby. Icelandic foreign minister Gudlaugur Thór Thórdarson also spoke at the event. [3]