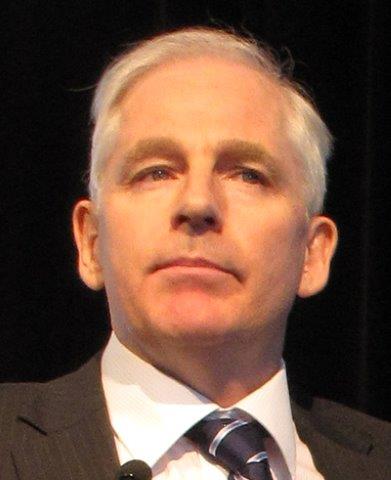 David M. W. Evans is an editor for the Australian edition of GoldNerds, a company that sells information about gold companies to investors. He also does private mathematics research. Evans works alongside his wife Joanne Nova at Science Speak, a group that describes itself as “a small private scientific modeling and mathematical research company” that also speaks “about some science and economic issues.” [1], [2]

David Evans gained media attention after a 2008 article he wrote in The Australian titled ”No smoking hot spot.” The article claims that climate change is not caused by C02 emissions because there is no evidence of “a hot spot about 10km up in the atmosphere over the tropics.” [3]

His claim has been thoroughly debunked by Tim Lambert, a computer scientist at the University of New South Wales. [4]

While Evans said ”[He] know[s] a heck of a lot about modeling and computers,” in a 2007 presentation to the Lavoisier Group, he also states clearly that he is “not a climate modeler.” [5]

David Evans claims to be a “Rocket Scientist,” and conservative news sources have also described him as a ”Top Rocket Scientist.” While Evans does have a Ph.D. in electrical engineering, there is no evidence that he was ever employed as a rocket scientist. [3], [6]

When DeSmogBlog contacted Evans regarding his claim, Evans replied that “In US academic and industry parlance, ‘rocket scientist’ means anyone who has completed a PhD in one of the hard sciences at one of the top US institutions.” Evans also claims to be “building a word processor for Windows.” DeSmogBlog contacted Microsoft and they have confirmed that he does not work for them. [7]

Sciencespeak also responded in similar parlance, saying that “’Rocket scientist’ is or was a widely used colloquial term in the US to mean anyone capable of doing rocket science, and applies to most hard technical PhDs at the handful of top institutions (and David certainly qualified).” Sciencespeak additionally describes Desmog as an “attack site” with the intent of manufacturing “smears on scientists.” [8]

David Evans proposes a “Notch-Delay Solar Theory” which he summarizes as follows:

“Global temperatures will come off the current plateau into a sustained and significant cooling, beginning 2017 or maybe as late as 2021. The cooling will be about 0.3 °C in the 2020s, taking the planet back to the global temperature that prevailed in the 1980s. This was signaled (though not caused) by a fall in underlying solar radiation starting in 2004, one of the three largest falls since 1610 when records started. There is a delay of one sunspot cycle, currently 13 years (2004+13 = 2017).” [9]

“The model architecture was wrong. Carbon dioxide causes only minor warming. The climate is largely driven by factors outside our control.” [10]

“Yes, CO2 has an effect, but it’s about a fifth or tenth of what the IPCC says it is. CO2 is not driving the climate; it caused less than 20 per cent of the global warming in the last few decades.” [10]

“There is no empirical evidence that rising levels of carbon dioxide will raise the temperature of the Earth’s surface as fast as the UN’s Intergovernmental Panel on Climate Change (IPCC) predicts. The predictions are entirely based on calculations with models.” [13]

“The climate models all predict that as the planet warms, a hot spot of moist air will develop over the tropics about 10 kilometres up, as the layer of moist air expands upwards into the cool dry air above. During the warming of the late 1970s, ’80s and ’90s, the weather balloons found no hot spot. None at all. Not even a small one. This evidence proves that the climate models are fundamentally flawed, that they greatly overestimate the temperature increases due to carbon dioxide.” [14]

“The theory that we caused the global warming with our emissions of carbon dioxide is based on two assumptions (guesses), made in the early 1980s when there was insufficient data. One assumption has since been disproved, and the second is looking dubious.” [15]

How would anyone really know if global warming is occurring? People simply don’t notice changes as small as 0.5°C, the amount of global warming over the last century. Any perceived cooling can be explained away by alarmists as just “regional variation”. It’s beautiful: this scam could go for decades.” [15]

“If there is no hot spot then an increased greenhouse effect is not the cause of global warming. So we know for sure that carbon emissions are not a significant cause of the global warming. […]” [16]

“I am the rocket scientist who wrote the carbon accounting model (FullCAM) that measures Australia’s compliance with the Kyoto Protocol, in the land use change and forestry sector.” [3]

In January 2018, more than 200 scientists endorsed an open letter calling on the American Museum of Natural History (AMNH) to remove climate change denier Rebekah Mercer from its board and to “end ties to anti-science propagandists and funders of climate science misinformation.” The New York Times reported that those among the AMNH letter calling for Mercer to step down were Michael E. Mann, director of the Earth System Science Center at Pennsylvania State University, and Katharine Hayhoe, director of the Climate Science Center at Texas Tech University. [33]

Evans was among a group of climate change deniers who responded with their own open letter, calling for the AMNH “not to cave in to this pressure.” The letter was signed by numerous individuals with ties to groups funded by the Mercer Family Foundation such as Will Happer of the CO2 CoalitionRichard Lindzen, a fellow at the Cato InstituteCraig Idso, the chairman of the Center for the Study of Carbon Dioxide and Global Change. There are a number of signatories affiliated with the Heartland Institute, which has received over $5.78 million from the Mercer Family Foundation since 2008. [34]

David Evans was a signatory of a petition (PDF) organized by Richard Lindzen of the Cato Institute urging President Donald Trump to pull the United States out of the United Nations international convention on climate change (UNFCCC). [31]

“In just a few weeks, more than 300 eminent scientists and other qualified individuals from around the world have signed the petition below,” Lindzen wrote in the letter.  [31]

DeSmog investigated the list, and found that only a small handful of the signatories could be considered “even remotely ‘qualified’ or ‘eminent’ — but not in the field of climate science.” The list included individuals “interested in climate,” and one signatory who only identified as an “emailer who wished to sign the petition” while some signers provided no affiliation or address whatsoever. [32]

David Evans is listed as a “Founding Member” of group named Climate Exit (Clexit) led by climate change denier Christopher Monckton. According to Clexit’s founding statement (PDF), “The world must abandon this suicidal Global Warming crusade. Man does not and cannot control the climate.” [17], [18]

Desmog reports on how the group grew in the wake of the UK‘s decision to leave the EU. A key member of Clexit’s “60 well-informed science, business and economic leaders” is Hugh Morgan, a former board member of the Reserve Bank of Australia and former CEO of Western Mining Corporation with close ties to Australia’s Liberal party. [19], [20]

“If the Paris climate accord is ratified, or enforced locally by compliant governments, it will strangle the leading economies of the world with pointless carbon taxes and costly climate and energy policies, all with no sound basis in evidence or science […]”  [18]

“If Dr Evans is correct, then he has proven the theory on carbon dioxide wrong and blown a hole in climate alarmism,” she writes. “He will have explained why the doomsday predictions of climate scientists aren’t reflected in the actual temperatures.” [10]

Graham Readfearn comments on the piece in an article in The Guardian, noting that Evans’s theory had arose from a series of over 11 blog posts he had on his wife’s blog (JoNova) where Evans claims to have found fundamental problems with climate models. [21]

Prof Matt England, of the University of New South Wales climate change research centre, had this to say:

David Evans has a superb track record of dodgy claims and bizarre climate change theories. He has zero credibility in the field and it’s staggering that any credible journalist could fall for this rubbish. [21]

“I’ve been working in climate science for 25 years now, and every few months someone (often they are engineers) comes up with a supposed bombshell refutation of human-caused global warming – none of this has ever stood up to scientific scrutiny. Dr Evans rolls out a number of well-worn false assertions often heard from those outside science who try to discredit climate science. Global warming is not pausing: it’s a measured fact that the globally hottest years on record are 2014, 2010 and 2005. 2015 is already so much warmer than 2014 that it is almost certain to be yet another record year. Models reproduce (and have in fact predicted) the warming of the past forty years well. I am surprised that some journalists are still gullible enough to present such a non-story, based merely on wild claims in a blog.” [21]

David Evans is listed as a Contributing Author to “Climate Change Reconsidered II,” a publication of the Heartland Institute’s Nongovernmental International Panel on Climate Change (NIPCC). It was sponsored by the Center for the Study of Carbon Dioxide and Global Change, The Science and Environmental Policy Project, and the Heartland Institute. [22]

The report’s introduction outlines how it plans to specifically discredit the Independent Panel on Climate Change (IPCC): [23]

“Like its predecessor reports, this volume provides the scientific balance that is missing from the overly alarmist reports of the United Nations’ Intergovernmental Panel on Climate Change (IPCC), which are highly selective in their review of climate science and controversial with regard to their projections of future climate change. Although the IPCC claims to be unbiased and to have based its assessment on the best available science, we have found this to not be the case. In many instances conclusions have been seriously exaggerated, relevant facts have been distorted, and key scientific studies have been ignored.” [23]

David Evans was a speaker at the Heartland Institute’s Fifth International Conference on Climate Change (ICCC5) in Sydney, Australia. The event was sponsored by Heartland, Americans for Tax Reform, the Property Rights Alliance, and the Institute of Public Affairs. [24]

Evans’ speech was titled ”Is the Western Climate Establishment Corrupt?” Video below: