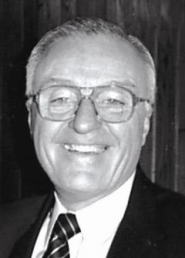 David H. Padden was the founder of the Heartland Institute, a founding director of the Cato Institute, and played a prominent role in a number of other libertarian think tanks. Padden also started the small municipal bond firm Padden and Co. in the early 1960s.

The Heartland Institute, which Padden helped found, has said that global warming is not a crisis.

With reference to Charles Koch, Padden has said:

“I would never attempt to second-guess whatever he’s doing in the interest of making this a free country. He has a strategy that probably we are unaware of. He’s so smart and so successful that I’m just going to await the outcome.” [3]

According to his profile at the Heartland Institute, David H. Padden has provided financial assistance as well as his leadership to numerous libertarian organizations, many of which have been involved in disputing the existence of man-made climate change.

Helped found the Heartland Institute and Served as Chairman of the Board from 1984 to 1994, at which time he became director and chairman emeritus.

Padden helped found the Cato Institute, and served as one of the Original Board Members. He was still listed as a Board Member in 2002.

Ed Crane, Cato’s co-founder and president, described Padden as “the conscience of the Cato Institute.” [1]

According to Google Scholar, David H. Padden has not published any articles in peer-reviewed journals on any subject.