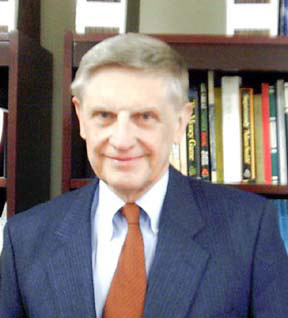 David G. Tuerck serves as professor and chairman of the Suffolk University Department of Economics and president of the Beacon Hill Institute at Suffolk University. He is past president of the North American Economics and Finance Association. Tuerck serves as the Director of the Beacon Hill Institute, a conservative think tank based out of Massachusetts. [1], [2]

Tuerck has been a Heritage Foundation Policy Expert in Economics and once served as the director of the Center for Research and Advertising at the American Enterprise Institute (AEI).

He has made many television and radio appearances and has testified before the U.S. Senate Committee on Labor and Human Resources, Subcommittee on Children and Families, as well as various committees of the Massachusetts legislature.

“I have found it necessary to go around the country pointing out that claims about green jobs are all phony.”  [3]

Tuerck wrote an article at CommonWealth Magazine criticizing the lawsuit that Massachusetts Attorney General Maura Healey had brought against ExxonMobil. The lawsuit accuses Exxon “for deceptive advertising to Massachusetts consumers and for misleading Massachusetts investors about the risks to Exxon’s business posed by fossil fuel-driven climate change—including systemic financial risk.” [14], [15]

A revision of the lawsuit highlighted how the consequences of the coronavirus pandemic “are a harbinger of the types of systemic risks posed by climate change, demonstrating the sweeping and interconnected nature of climate-driven dangers and disruptions, such as the widespread economic harms of sudden global market disruptions, supply chain interruptions, and health care system failures.” [14]

According to Tuerck, “The conflation of the coronavirus and climate crisis, both misleading and far-fetched, leads to an inescapable conclusion: Healey’s climate change litigation is based solely on belief.” [14]

“There simply is absolutely no compelling proof that ExxonMobil faces any immediate or even long-term prospects of declining sales as a result of climate change,” Tuerk also claimed.

Kert Davies, director of the Climate Investigations Center, responded to Tuerck’s op-ed. He responded to Tuerck’s above argument, noting that “While demonstrably false in so many ways, this statement proves Tuerck is stuck in some bygone decade of denial and suggests he has neither read the Massachusetts complaint, nor the internal Exxon documents from the 1970s and ‘80s cited in the complaint, which can be read and downloaded at ClimateFiles.com.  These documents show Exxon’s staff scientists modeling and anticipating how fossil fuel consumption would have to be curtailed to avoid dangerous climate change.  They knew regulations were coming.” [16]

Tuerck was a keynote speaker at the Heartland Institute‘s Sixth International Conference on Climate Change. (ICCC6.) [4]

His speech, titled “State efforts to promote renewable energy: doing the damage that the feds won’t do” can be viewed below.

Tuerck was a speaker at the Heartland Institute‘s Fourth International Conference on Climate Change (ICCC4.) [12]

His speech, titled “Not that easy being green? Blame Uncle Sam” can be viewed below.

Tuerck was a speaker at the Heartland Institute‘s Third International Conference on Climate Change (ICCC3.) [13]

His speech, titled “Cap-and-Trade Done Right and Done Wrong” can be viewed below.

DeSmogBlog researched the funding behind the conference and found sponsor organizations had received over $47 million from energy companies and right-wing foundations, with 78% of that total coming from the Scaife Family of foundations.

Spoke at the “Boston Tea Party,” an event organized by the Tea Party to “voice their displeasure with the egregious growth of government and the irresponsible policies our local, state and federal governments are pursuing.” [5]

Included in what they consider irresponsible policies are anti-global warming policy, which Tuerck says will “stifle economic growth, kill good jobs, and drive up energy costs.” [6]

Tuerck was a speaker  at the Heartland Institute‘s First International Conference on Climate Change (ICCC1.) [7]

His speech, titled “An Economic Critique of Greenhouse Gas Legislation in the States” can be viewed below.

He concluded (PDF) that “Proposed legislation [to combat climate change] may provide benefits but they have yet to be determined” and “The legislation would impose measurable costs on business and  on the economy” so the commission should “weigh these costs against the purported (and so far unsubstantiated) benefits [of said legislation].” [9]

According to a search of Google Scholar, Tuerck has not published any research in peer-reviewed journals. He has written numerous papers for the Beacon Hill Institute, and for the American Enterprise Institute.