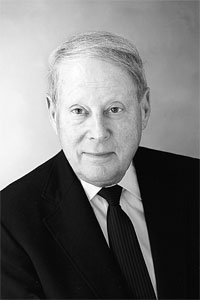 Edward David is an American electrical engineer. He served as a past science advisor to president Richard M. Nixon. He resigned from his position with Nixon in 1973, because of “disappointment that his advice had not been heeded.” [2]

David was past president of Exxon Research and Engineering Company and Vice-President of Science and Technology of Exxon Corporation. [3], [4]

He was also the past executive director of Bell Telephone Laboratories, and President of his own investment firm, EED, Inc. He is now retired. [5]

David was one of sixteen “scientists” who signed an inflammatory Wall Street Journal opinion piece titled “No Need to Panic About Global Warming” that stated: [6]

“The time has come for a closer and more intimate relationship between industry and academia.” [7]

David is one of 16 scientists who appended their signatures to a Wall Street Journal article titled “No Need to Panic About Global Warming.” [6]

Interestingly, 255 members of the United States National Academy of Sciences wrote their own essay, this on the realities of climate change, which had been rejected by the Wall Street Journal in favor of the sixteen-scientist letter. [8]

Media Matters also reported on the WSJ article, and also found that most of the scientists who signed the Op-Ed “Do Not Actually Publish Peer-Reviewed Climate Research.” They also contacted Yale Economist William Nordhaus who had been cited by the article, and he replied that it was a “Complete Mischaracterization Of My Work.” [9]

According to a search of Google Scholar, there do not appear to be any publications in peer-reviewed journals by an “Edward E. David Jr.”

The search does list him as the “Panel Chair” for a 1979 policy report at the New York Academy of Sciences. The report discusses alternative energy sources. At the time he was President of Exxon Research and Engineering Company, and Vice-President of Science and Technology of the Exxon Corporation.

The report’s introduction states that “Any hope of utilizing fusion, photovoltaics, the breeder, biomass, solar, or solar thermal energy on a large-scale economically feasible basis in the next two decades is based on a thin thread of optimism, as is the hope for massive reductions in energy demand through end-use conservation.” [4]