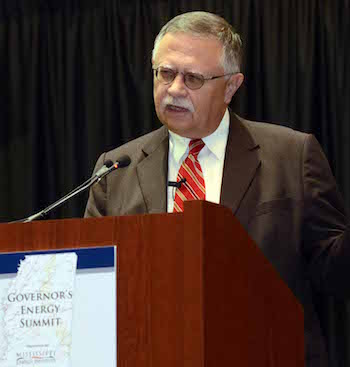 Frank Clemente is an emeritus professor of Sociology at Penn State University. [2]

He is the former head of Penn State’s Environmental Policy Center (1979-1981) and has served as a consultant to a range of corporations and government agencies.  Clemente’s areas of research have included energy policy including the “development of such energy resources as natural gas, oil and coal. Socio-economic aspects of construction of power plants, dams, pipelines and transmission lines.”[2]

Clemente was the co-author of the National Coal Council’s, “The Urgency of Sustainable Coal.” [3], [2]

Frank Clemente has regularly testified on behalf of energy companies, and has been an expert witness in more than 50 energy related cases. [4]

Greenpeace has described Clemente as a “favorite” of the coal industry. particularly Peabody Energy, which has regularly used his research as evidence for the need to expand coal power in developing countries. [5]

Clemente has been paid to write reports for Peabody Energy including one on “the Global Value of Coal,” for which he was paid $50,000 by Peabody Energy coal company. [5]

Frank Clemente is behind a now-defunct website titled Energy-Facts.org, which featured “Commentary and Research from Dr. Frank Clemente.” An archived version of Clemente’s website describes coal as “the path out of poverty” for Southeast Asia and developing countries. [24]

According to WHOIS results, Clemente registered the website on September 22, 2009. The website, which describes itself “a project of Dr. Frank Clemente,” is also connected to climate change denier Mark P. Mills. [25], [26]

The website featured weekly issues written by both Frank Clemente and Mark P. Mills on the benefits of coal and other fossil fuels. [27]

Clemente advocated for carbon capture and storage, according to a presentation he gave at The Coal Institute: [28]

“Carbon capture and storage (CCS) is the technological pathway to both meeting climate change goals and unlocking the full economic value of our greatest energy resource- coal.” [6]

“I have written, spoken and testified quite a bit on coal’s importance to the quality of life around the world, especially in developing nations. I have worked with the Coal Industry Advisory Board, International Energy Agency, World Coal Association, the American Coal Council and the NCC, as well as a number of private coal based companies and regional groups.” [7]

“There is no substitute for coal. To replace the world’s coal power plants would require about 5,000 Hoover Dams or constructing a new nuclear power plant every four days for the next 25 years or adding more than 5 million wind turbines — enough to stretch 1 million miles to the moon and back twice.” [8]

The following is from a February, 2014 white paper by Frank Clemente titled “Coal Lifts Billions from Energy Poverty and Increases Access to Low-Cost Electricity at Scale” (PDF):

“Access to affordable energy, socioeconomic security and a clean environment are inalienable human rights. If the world’s goal truly is the eradication of poverty and environmental improvement, then coal, our most abundant source of electricity, must be an integral part of the solution

[…] On the other side of the globe, since 1990, China has used coal-based energy to lift 650 million people out of poverty, reduce female illiteracy by almost 80 percent and decrease infant mortality by 70 percent. Clean coal technologies, including the construction of highly efficient supercritical power plants, provide the opportunity for the rest of the developing world to utilize coal to eradicate the specter of energy poverty that haunts billions.” [9]

“Coal is now powering the remarkable 21st century socio-economic miracle unfolding in China, where 80% of the global population taken out of poverty in the last 20 years is Chinese. Importantly, this increasing dependence on coal continues apace as India and other developing countries are emerging from the wings to seek a better life for their citizens through coal.” [24]

Clemente appeared in a series of videos by the Texas Public Policy Foundation’s Life:Powered campaign. S&P Global reported Clemente was featured in one of the campaigns early screenings. [31], [32]

View a sample below where Clemente advocates for the export of American fossil fuels to address “energy proverty” in other parts of the world:

An undercover Greenpeace investigation found Frank Clemente was among a group of academics willing to accept funding from fossil fuel companies to testify at state hearings, write newspaper articles, and author journal articles. [5]

Greenpeace approached a group of academics from Princeton and Penn State, posing as representatives of oil and coal companies and asking for papers promoting the benefits of CO2 and the use of coal in developing countries.

“In none of these cases is the sponsor identified. All my work is published as an independent scholar,” Clemente said.  [5]

Greenpeace published a series of emails between Frank Clemente and fictional energy companies. In one interchange, Clemente is asked to write a briefing paper for a “client with significant interests in the Indonesian energy sector, who is looking to safeguard their interests there.” [5]

Horizon also asks whether there is a need to declare source funding. Clemente responds, “I have little doubt we can publish the findings here in the US. There is no requirement to declare source funding in the US” (emphasis added). Despite being “supported by government agencies, trade associations, the University, and private companies,” Clemente writes that his research and writing was always “published under the rubric of me as an independent scholar.” See below. [5]

In another email, Clemente discloses that he was paid to author a 2012 report (PDF) for the International Energy Agency in 2012. Greenpeace notes that the fine print of the report lists Peabody Energy as a sponsor, however the dollar value had not been known until now.  View the full email chain here. [10], [7]

As ABC News reports, Frank Clemente responded to the Greenpeace’s claims, saying “I fully stand behind every single statement I made. […] I write as an independent scholar fully apart from my non-salary role as Professor Emeritus. This is academic freedom.” [11]

He added, “I am very proud of my research and believe that clean coal technologies are the pathway to reliable and affordable electricity, reduction of global energy poverty and a cleaner environment.” [12]

Dr Clemente said he was retired and operating as an independent consultant:

“I was not on the Penn State payroll during the publication of either of the two documents that were mentioned in the Greenpeace blog. Thus, the University is not responsible for my work in any way,” he told ABC News via email.  [11]

Lisa Powers, director of news and media relations for Penn State, said that “Dr Clemente has long since retired from the university (he is no longer on our payroll) and the university doesn’t have disclosure rules for retirees.

“When Dr Clemente expresses his views on issues publicly, they are his own and do not reflect the views of the university,” she said. [11]

Frank Clemente was a keynote speaker at the “At the Crossroads Energy & Climate Policy Summit“ event hosted by the Texas Public Policy Foundation (TPPC). [22]

According to Clemente, “it’s not like fossil fuels are reaching the twilight. This is like the end of the beginning.”

“Coal-based generation in the United States […] has increased 146% since 1970. And all these emissions have dropped off. Clean coal works. We have to implement it.

“People need electric power. They need natural gas. And they need oil. And they’re going to get it. And they should have it.”

Alex Epstein of the Center for Industrial Progress (CIP) interviewed Frank Clemente on coal and its “impact on human health” for episode 55 of the Power Hour program. [13]

Frank Clemente is the lead author and editor of a 2012 Working Paper by the Coal Industry Advisory Board/International Energy Agency (IEA) titled “The Global Value of Coal” (PDF). [10]

The Acknowledgements section lists Peabody Energy as the sponsor of the paper. The paper also mentions contributions from individuals from Anglo American and Rio Tinto Energy for “structuring and guiding the work.”

In a 2015 undercover investigation by Greenpeace, Clemente admits to having been paid $15,000 by Peabody Energy for the paper. [5]

The paper is explicit about its purpose to encourage pro-coal policy and investment:

“The purpose of this paper is to highlight for policy makers the value of coal to world economic and social development and so encourage development of a policy environment that will allow the coal and electricity industries to make the necessary investments in production capacity and CO2 emissions reduction technologies.” [10]

The paper also promotes “clean coal,” which it says “presents a unique opportunity for the world to meet both economic and environmental goals affordably, reliably and sustainably.”

SourceWatch describes clean coal as a “high-profile marketing campaign aimed at convincing the public and politicians that the goal of using coal without damaging the environment and public health is either a current or a foreseeable reality.” [20]

Peabody Energy’s Chairman and and CEO, Gregory H. Boyce, referenced Frank Clemente in a testimony (PDF) before the U.S. House of Representatives Select Committee for Energy Independence and Global Warming where Boyce argues that there is a “near-zero emissions future from coal.” [14]

Boyce’s references include the following:

Frank Clemente wrote an article for the American Coal Council’s American Coal magazine titled  “Out of Poverty: Coal’s contribution to China is a model for the developing world” (PDF).

The article argues that without coal, “China could not have catapulted itself to the center of the world’s economic stage.” [15]

“China is providing a template of how coal can be used to pull people out of poverty and propel an entire society toward higher living standards. India and many other countries around the world are learning from China’s example,” Clemente writes. [16]

Clemente presented at the 2009 summer trade seminar of The Coal Institute. His presentation was titled “Why We Need More Coal Based Electricity:
Energy Realities Facing the United States” (PDF). [28]

Frank Clemente authored a paper (PDF) where he argues that coal is superior to natural gas for reducing greenhouse gas emissions. [17]

“Fuel-switching from coal to natural gas will not only increase electricity prices and lower reliability, it will frustrate, not advance, current climate policies by retarding policy advances in CCUS for both coal and gas,” Clemente writes.

Frank Clemente was a speaker at the Heartland Institute‘s 2009 International Conference on Climate Change (ICCC2) in New York.[18]

DeSmogBlog investigated sponsors behind the conference and found that they had collectively received over $47 million from energy companies and right-wing foundations. [19]

Climate-change proposals currently before Congress [3] depend heavily on predictions of the response of natural-gas supply and prices to carbon-permit prices. The actual capability of the NG supply network both here and abroad will be a critical factor in how economies adjust to such climate-change policies. Overestimating the supply capabilities of this network (as EIA has done over the past decade) could lead to underestimating the costs of carbon regulations.”

Frank Clemente claims to have worked with the following organizations: [7]

A search of Google Scholar shows that Frank Clemente has authored a number of articles in peer-reviewed journals on the subject of Sociology. [21]

He has also published a range of articles on energy policy in industry-friendly journals. According to his archived profile at Coal Can Do That, Clemente had published over 100 articles in energy related media including Public Utilities Fortnightly, Electrical World, Nuclear News, World Oil, American Coal, Oil and Gas Journal and the Journal of Commerce. His social science publications have appeared in such journals as Farm Economics, Urban Studies, Journal of Black Studies, Growth and Change and Rural Sociology.  [1]