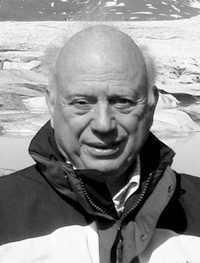 Fred Goldberg passed away on November 6, 2016, according to his profile at the Heartland Institute. In 2004, Goldberg formed an “informal international network to study and distribute information about climate change and global warming.” Heartland also describes him as a “climate analyst and authority on polar history and exploration.” [2]

According to his archived bio at the Green Valley 260 Club (a senior men’s club in Arizona), Fred Goldberg received a “doctors degree” in welding technology specializing in thermal cutting in 1975. In 2004, Goldberg “started to get interested in the climate debate and greenhouse effect.” [1]

Goldberg is skeptical of the notion that global warming is having a negative effect on polar bear populations in the north. While his educational background is in welding technology, Goldberg has been cited as an authority on polar history and exploration at the Royal Institute of Technology in Stockholm, Sweden.

”[…] [T]here is no connection between human outlets of CO2 and the annual increasing rates of CO2 in the atmosphere. Furthermore it is evident that increasing or falling amounts of CO2 emissions has no correlation to temperature changes.” [3]

“There is research that indicates that the ice sheets are being reduced, but there are also studies that show the complete opposite… . As for polar bears, much points to that their numbers are increasing rather than diminishing.” [5]

Fred Goldberg was a speaker at the Heartland Institute’s Ninth International Conference on Climate Change (ICCC9) in Las Vegas, Nevada. [9]

Goldberg was a speaker (PDF) at the Heartland Institute’s International Conference on Climate Change in 2009, listed as a representative of the “Royal School of Technology.” [6]

Goldberg was a presenter at the Heartland Institute’s 2008 International Conference on Climate Change.

Goldberg is listed as a signatory of the December 2007 open letter (PDF) to United Nations Secretary-General Ban Ki-Moon that called global warming “a natural phenomenon that has affected humanity through the ages,” defined carbon dioxide as “a non-polluting gas that is essential to plant photosynthesis,” and claimed the UN‘s Intergovernmental Panel on Climate Change’s reports “quite inadequate as justification for implementing policies that will markedly diminish future prosperity.” [7]

Goldberg was a speaker at a forum under the Royal Institute of Technology (KTH) titled “Global Warming – Scientific Controversies in Climate Variability,” held in September, 2006.

The forum discussed how “global cooling is predicted based on aspects related to solar cycles,” and describes that “there is no reliable evidence to support that the 20th century was the warmest in the last 1000 years.”

According to a search of Google Scholar, Fred Goldberg has not published any articles on the subject of Climate in respectable peer-reviewed journals, although he has published one article in Energy & Environment, a journal that has been criticized for its peer-review process and which has been run by climate skeptics.

In 2007, Goldberg wrote an essay making the usual climate “skeptic” claims about “medieval warming” and the “little ice age.” The bio on the essay explains that he “has also pursued a secondary vocation in Arctic studies,” and that “he travels every year to Svalbard, an archipelago in the Arctic Ocean midway between Norway and the North Pole.”

In a 2007 article he co-authored, Goldberg states that “there is research that indicates that the ice sheets are being reduced, but there are also studies that show the complete opposite.” He also points out that, “As for polar bears, much points to that their numbers are increasing rather than diminishing.”