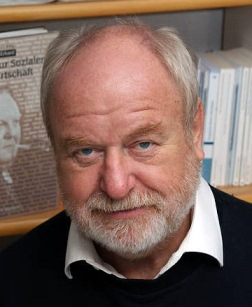 Gunter Ederer is a film producer and business journalist in Germany. He worked with ZDF (Zweites Deutsches Fernsehen), a German television broadcaster based in Mainz, as well as at Far East SDF from 1984 to 1990. He now works independently, and published seven books between 1991 and 2001, as well as a number of movies. [1]

Gunter Ederer attended a climate meeting which resulted in The Heiligenroth Climate Manifesto. The first line states that there “is no proven influence on the climate by man-made emissions of CO2.” [2]

“Unlike the trillions of the national debt, of which no one knows how they will ever be repaid, the idiots have already been determined who will have to pay [100 billion Euros] for the ‘sun world’: Us electricity customers. It is one of the secrets of the conservative parties, which now and again still use the word ‘market economy’, why they are so silent about the subsidies for solar power. And it is one of the secrets of the Left, why they don’t rally against this exploitation of vulnerable people in favour of house and land owners.” [3]

“We need a strong state to compete in a free market sets the rules, monitors compliance with these rules, but otherwise out stops.” [4]

Ederer was listed on the program for the 12th conference of the European Institute for Climate and Energy (EIKE), also billed as the Heartland Institute‘s 13th International Conference on Climate Change (ICCC13). According to a translation of the agenda, he spoke on “The Greens, between law and pseudo-moral” on November 24. [11]

Gunter Ederer was a speaker (PDF) at the Eighth International Conference on Climate Change (ICCC-8)/Fifth International Conference on Climate and Energy (ICCE-5) sponsored by both the Heartland Institute and the European Institute for Climate and Energy (EIKE). Teluk’s speech is titled “’Germany’s new Energy Concept and its Cost for the Consumer.” [5]

Published “Dream on, Germany!” (Träum weiter, Deutschland!), a book in which he criticized Germany’s “orthodoxy” in areas such as education, climate change, and national debt. In his book, Ederer describes prominent climate change skeptic Fred Singer as a “highly respected scientist” on climate change issues. [6]

Ederer wrote an open letter to Michael Kauch, environmental spokesman and German politician of the Free Democratic Party in the German Bundestag. Gunter states that the IPCC had been “manipulated,” that the IPCC‘s results on climate change were “based on simple amateur essays alone” and serve only the purpose of “scaremongering.” [7]

Gunter Ederer presented at the Third International Climate Conference in Berlin, organized by the European Institute for Climate and Energy (EIKE), the Berlin Manhattan Institute and Haus der Zukunft. His presentation was titled “The green-energy lobby and its politico- economical consequences.” Video of his presentation available here. [8]

Attended the “2nd Climate Meeting” at Heiligenroth, an event designed “to initiate processes against daily campaigns of media and politics concerning climate.” The following “Heiligenroth Climate Manifesto” was developed from the event (Gunter is listed as a signatory): [9]

Full lists of Ederer’s books and movies are available on his website.