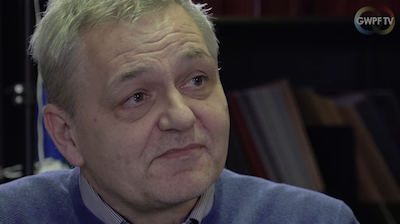 Henrik Svensmark is a physicist at the Danish National Space Center in Copenhagen. Svensmark has studied the effects of cosmic rays on cloud formation and presented a hypotheses that global warming is caused by solar radiation. [13]

Svensmark appeared in a documentary titled “The Cloud Mystery” to illustrate his position, and has also shared his research at the Heartland Institute‘s International Conference on Climate Change.

Henrik Svensmark is director of the Centre for Sun-Climate Research at the Danish Space Research Institute (DSRI). Previously, Dr. Svensmark was head of the Sunclimate group at DSRI. He has held post doctoral positions in physics at University California Berkeley, Nordic Institute of Theoretical Physics, and the Niels Bohr Institute. [2]

“I don’t think that we are headed for disaster because there’s nothing in the record of data that indicates that the number of storms, droughts—I mean, yea, whatever hurricanes and so on—they are not increasing as what you’d expect from all the things that you hear. So I don’t think that we are heading for a disaster, and if that climate sensitivity to CO2 is smaller than what you get from all these climate models, then the change in temperature, you know in the next fifty years, might be quite small,” Svensmark said. [15]

Svensmark wrote an opinion piece in the Danish newspaper Jyllands-Posten. Climate change denial blog Watts Up With That offered a translation, including the following quote from Svensmark: [3]

“In fact global warming has stopped and a cooling is beginning. No climate model has predicted a cooling of the Earth – quite the contrary. And this means that the projections of future climate are unreliable.” [3]

According to columnist Lawrence Solomon, “Dr. Svensmark has never disputed the existence of greenhouse gases and the greenhouse effect. To the contrary, he believes that an understanding of the sun’s role is needed to learn the full story, and thus determine man’s role. Not only does no climate model today consider the effect of cosmic particles, but even clouds are too poorly understood to be incorporated into any serious climate model.” [2]

In an  interview with the Global Warming Policy Foundation, Svensmark claimed we are experiencing global cooling and that temperatures have not increased “for the past 20 years”: (This statement is one of several common myths listed by SkepticalScience):

“We expect that solar activity should cool the Earth, and it could actually be why the temperatures are not increasing. I mean, they haven’t been increasing for the past twenty years,” Svensmark said. [15]

Svensmark was quoted in the cover blurb for The Chilling Stars: A New Theory on Climate Change. [4]

“During the last 100 years cosmic rays became scarcer because unusually vigorous action by the Sun batted away many of them. Fewer cosmic rays meant fewer clouds—and a warmer world.” [4]

The European Institute for Climate and Energy (EIKE) promoted the event on its website to “set facts against CO2 hysteria and climate activism.” [18]

Germany’s AfD accelerated its promotion of climate change denial since the emergence of Swedish activist Greta Thunberg in August 2018. A smear campaign against Thunberg mocked her autism as a form of “psychosis” and compared her to a cult leader and a member of a Nazi youth organization. AfD attributed Thunberg’s popularity to the work of “PRprofessionals seeking to bedevil the plant-nutrient carbon dioxide.” [17], [19]

Speaking to the Guardian, a representative of Greenpeace Germany said of the event:

“The AfD is using the Bundestag as a stage for its dissemination of climate lies. They invite fake experts to a so-called symposium on climate change to generate content for mass dissemination via social media channels and stir up hatred and anger on the internet. We are experiencing a shift to the right on social media and in society. In a short period of time, the new right has established its own counter-society on climate issues. With troll armies, agitating magazines and the support of climate skeptics like EIKE, it has created its own sphere that is massively underestimated.” [17]

Svensmark was listed on the program for the 12th conference of the European Institute for Climate and Energy (EIKE), also billed as the Heartland Institute‘s 13th International Conference on Climate Change (ICCC13). According to a translation of the agenda, he back-to-back with Nir Shaviv on “The Impact of Cosmic Radiation on the Climate – Latest Research Findings and Their Importance for Understanding Climate Change” on November 24. [16]

“When we have fewer cosmic rays, we actually get a warmer world. And uh, maybe, I mean that’s what we’ve been talking about for the last two days. That part of the 20th century warming might actually be because of changes in solar activity. And this mechanism that I’m talking about today might actually be important, or quite important in, uh, in that, uh, that feature,” Svensmark concluded in his talk.

Jonny Bairstow: “So climate change isn’t anything to do with the industrial revolution at all as a lot of people would say so?”

Bairstow: “And a lot of people are quite sensationalist about climate change nowadays saything that we’re out of time and so on and that we’ve kind of ruined the Earth. So, if it is the sun causing that instead, are we still headed for disaster?”

Svensmark: “I don’t think that we are headed for disaster because there’s nothing in the record of data that indicates that the number of storms, droughts—I mean, yea, whatever hurricanes and so on—they are not increasing as what you’d expect from all the things that you hear. So I don’t think that we are heading for a disaster, and if that climate sensitivity to CO2 is smaller than what you get from all these climate models, then the change in temperature, you know in the next fifty years, might be quite small.” [15]

Svensmark published a paper in 2013 with preliminary evidence suggesting that cosmic rays could seed cloud formation, which if true, would indicate that they can influence global temperatures.  In an interview with Environmental Research Web, Svensmark claimed that cosmic rays could “play a major role in the warming.”  However, because solar activity has been flat and even slightly declining over the past 60 years, if cosmic rays had an influence on global temperatures, it would be a slight cooling influence over that timeframe.

Svensmark is listed as a “guest author” of Die kalte Sonne, or “The Cold Sun.” [5]

The book’s main authors – REpower Systems CEO Fritz Vahrenholt and Geologist Sebastian Lüning – claim that there is no climate catastrophe because “global warming over the past 150 years is part of a natural cycle that is characterized primarily by the sun.” [6]

According to some sources, the book contains numerous fallacies. According to an article published by Zeit Online (translated here), these fallacies include the book’s claims that the Earth has not warmed since 1998, that the Hockey Stick graph was a hoax, that only the sun is to blame for global warming, that the IPCC has manipulated climate science, and that we are entering a period of global cooling due to solar inactivity.

Svensmark was a speaker (PDF) at the “3rd International Energy and Climate Conference” which appears to have been sponsored by the skeptical European organization EIKE (Europäisches Institut für Klima und Energie/European Institute for Climate and Energy).

Svensmark was a speaker at the Copenhagen Climate Challenge conference.

According to the conference program, released by Tom Harris’s International Climate Science Coalition (Tom Harris was also at the conference to introduce the “Challenge”):

“The controversy surrounding Anthropogenic Climate Change is just beginning – there is clearly no known consensus among climate scientists about this rapidly evolving field. We therefore invite the media, politicians and policy makers to give a fair hearing to the views of the renowned expert ‘climate realists’ speaking at this conference.” [12]

Appeared in a documentary film titled “The Cloud Mystery,” where he presented findings that may be sufficient as a reason to “re-evaluate the causes of global warming.” [14]

Some of the experts appearing in the film include astronomer Nir Shaviv, and geologist Ján Veizer. Svensmark’s concludes that “Natural events in our Galaxy and on the manic-depressive Sun decide whether the Earth’s cloud cover is letting the Sun heat or cool the surface of the Earth.”

Svensmark’s theory has been debated by the scientific community. A 2003 paper critiqued Svensmark’s theory and suggested that his data does not support a correlation between cosmic rays and global temperature changes. [8]

Svensmark replied to the paper, stating that “nowhere in Peter Laut’s (PL) paper has he been able to explain, where physical data have been handled incorrectly, how the character of my papers are misleading, or where my work does not live up to scientific standards.” [9]

Svensmark was the subject of an article written as part of a series called “The Deniers” written by climate change skeptic Lawrence Solomon.  [2]

He has since been quoted by others, including fellow skeptic Nigel Calder, as having provided evidence to disprove “the global warming scare.” [10]

*Profile image screenshot of “The Connection between Cosmic Rays, Clouds and Climate” by the Global Warming Policy Foundation, via YouTube, March 16, 2018.