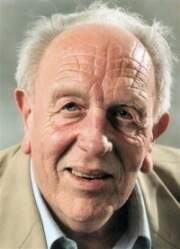 Although Calder has been employed as a “Science Writer,” he did not appear to have credentials as a scientist. [1]

Nigel Calder passed away in 2014. Calder served his apprenticeship as a science writer (not a scientist) on the original staff of the magazine New Scientist, and became its editor from 1962-66. [7]

Since 1996 Calder has worked as an independent author and television scriptwriter. He has helped produce numerous films, and he was the script consultant for “The Cloud Mystery” (2008), a 52-minute film that promotes the views of man-made climate change skeptic Henrik Svensmark.

According to Vanity Fair, Calder was featured in The Book of Predictions, a tome that included contributions from “various experts and psychics.” According to the article, “British science journalist Nigel Calder wrote that, by 2000, ‘the much-advertised heating of the earth by the man-made carbon-dioxide “greenhouse” fails to occur; instead, there is renewed concern about cooling and an impending ice age’.” [2]

“Governments are trying to achieve unanimity by stifling any scientist who disagrees [with man-made global warming theory]. Einstein could not have got funding under the present system.” [3]

“It’s likely that CO2 has some warming effect, but real proof of that hypothesis is tricky. You have to confirm by observation exactly how the CO2 changes the situation at different altitudes in the atmosphere and in different regions of the world. For example, CO2 is supposed to warm the upper air faster than the surface, but the measurements don’t show that happening. When the CO2 effect is eventually pinned down, it will probably turn out to be weaker and much less worrisome than predicted by the global warming theorists.” [4]

Script consultant for “The Cloud Mystery” (2008), a 52-minute film that promotes the views of man-made climate change skeptic Henrik Svensmark.

Nigel Calder’s only publications in the area of climate appear to have been in the journal Energy & Environment (E & E) such as:

E&E is edited by climate change skeptic Sonja Boehmer-Christiansen and has been described (PDF) as a journal skeptics can go to when they are rejected by the mainstream peer-reviewed science publications. The journal received a great deal of controversy over a research paper published by Sallie Baliunas and Willie Soon.

The Manic Sun is about Henrik Svensmark‘s theory about solar contributions to global warming.