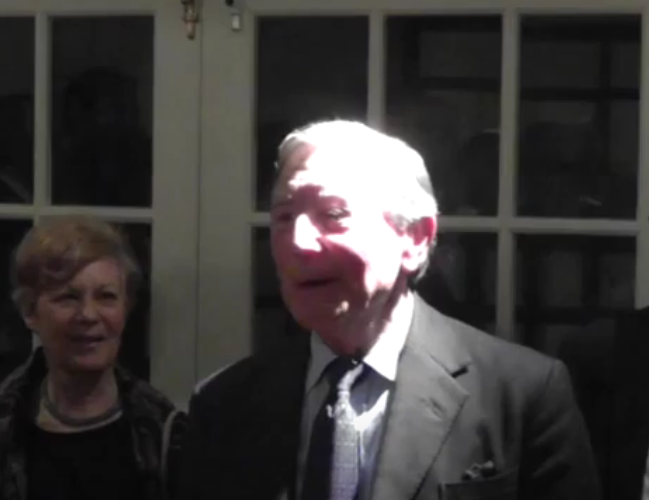 Lord Nigel Vinson, a Conservative peer, is one of a handful of known donors to the UK climate science denial group the Global Warming Policy Foundation (GWPF). [2] Vinson retired from the House of Lords in July 2022. [23]

Vinson was made a Conservative peer in 1985. He is also a former director of Barclays Bank (1982-1986) and is known for having been instrumental to the rise of Margaret Thatcher. [2], [4]

Alongside Thatcher, Vinson co-founded the Centre for Policy Studies, an opaque free-market British think tank. Vinson is also a prominent funder of the right-wing think tank, the Institute of Economic Affairs (IEA), which has received money from oil and tobacco firms. Vinson was made “Life Vice-President” of the IEA, having worked closely with its first director general, Sir Ralph Harris. [4]

Vinson was a member of the advisory council for the pro-Brexit campaign group Business for Britain, founded by Matthew Elliott, former Chief Executive of the Taxpayers’ Alliance. [22]

Since 2013, Vinson has been patron of The Freedom Association, a “libertarian” pressure group which sparked controversy in the 1980s for campaigning against boycotts of apartheid-era South Africa. In 1988, the association threatened to seek a legal injunction against the BBC to prevent the broadcaster from showing a Nelson Mandela 70th Birthday Tribute which it called “anti-apartheid propaganda.” Other prominent anti-EU politicians sit on the organisation’s council, including Christopher Chope, Roger Helmer, Daniel Hannan and Philip Davies, as well as climate science denier Christopher Monckton and Patrick Minford, leader of the pro-Brexit Economists for Free Trade. [16], [17], [18], [21]

The Freedom Association ran the pro-Brexit “Better Off Out” campaign and has organised events at Conservative Party conferences, with speakers including TaxPayers’ Alliance founder Matthew Elliott. The organisation’s council numbers various prominent climate science deniers and sceptics among its members, such as Christopher Chope, Daniel Hannan, Roger Helmer and Christopher Monckton, as well as Patrick Minford, who leads the anti-EU Economists for Free Trade. [19], [20], [16]

Vinson was exposed as one of the Global Warming Policy Foundation’s funders by a DeSmog UK investigation in 2014. Vinson has donated at least £50,000 to the GWPF through his charity, according to accounts submitted to the Charity Commission. [3], [10]

The Nigel Vinson Charitable Trust (NVCT) has also funded the anti-wind energy Renewable Energy Foundation, set up by TV presenter Noel Edmonds, as well as the Institute for Policy Research, a grant-making charity which financially supports many of the right-wing, pro-Brexit organisations based at Tufton Street. The NVCT has also funded Civitas, Open Europe, the Adam Smith Institute, the Politics and Economics Research Trust (founded by Matthew Elliott), Respublica, and Frank Furedi. Furedi is a key figure at the libertarian Spiked magazine, which DeSmog revealed to have received donations from the US oil billionaire climate science denial funders, the Koch Family Foundations. [10], [11]

The NVCT donated £5.5m to the private University of Buckingham in 2016, which led to the establishment of the Vinson Centre, a collaboration between the university and the free-market Institute of Economic Affairs, “dedicated to exploring the wide range of ideas, arguments and issues associated with the idea of a ‘constitution of liberty’”, according to an IEA press release. [10], [12]

The NVCT has also funded the Hampden Trust, part of the libertarian Freedom Association pressure group, which organised a “Climate Week” at the University of York in 2009 promoting climate science denial. According to an archived page of the Freedom Association’s website, speakers included Nils-Axel Mörner and David Holland, who took the University of East Anglia to an information tribunal over the “Climategate” email controversy. [13], [14], [15]

Lord Vinson is known for being an early funder of the GWPF, calling the group a “very admirable institution.” [3]

The GWPF has released reports claiming that “policies to ‘stop climate change’ are based on climate models that completely failed to predict the lack of warming for the past two decades” and contends that “carbon dioxide has been mercilessly demonized as ‘carbon pollution’, when in fact it is a benefit to the planet.” [5]

Speaking to the Guardian, Vinson said: [6]

“I am very proud to fund [the GWPF]. You have to put a question mark over climate change if over the last 14 years the world has not got any hotter.”

The University of Buckingham opened the Vinson Centre, a collaboration between the university and the free-market Institute of Economic Affairs, “dedicated to exploring the wide range of ideas, arguments and issues associated with the idea of a ‘constitution of liberty’”, according to an IEA press release. [12]

The Nigel Vinson Charitable Trust donated £5.5m to the private University of Buckingham. [10]

Lord Vinson donated £10,000 to the GWPF. This second grant to the climate denial think tank was recorded alongside a donation to the Prince’s Countryside Fund under the category, “For the advancement of environmental protection or improvement.” [3]

Vinson, a Eurosceptic, threatened to pull out of the Tory party and defect to UKIP unless then Prime Minister David Cameron loosened British ties with Brussels. [7]

Lord Vinson voted no to setting a target of reducing emissions by 80 percent by 2050 under the Climate Change Act. [8]

View a full list of Vinson’s affiliations at his Parliament.UK profile. Additional examples below: [2]

Nigel Vinson does not appear to be active on social media.

Nigel Vinson does not appear to regularly contribute to editorials or to have authored any books.