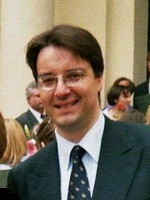 Holger J. Thuss is the current president of the European Institute for Climate and Energy, a group of German climate change skeptics founded in 2007 in Hanover (Europäisches Institut für Klima und Energie in German). Thuss also co-founded CFACT Europe, a group focused on “free market environmentalism” and served as its Executive Director as of 2004. Thuss has also been involved in European Politics, having served as an assistant to the former president of the European Union, Jacques Santer. From 2002 to 2004, Thuss served as Deputy Secretary General of the entrepreneurs association of the European People’s Party, and held various other positions with the European People’s Party from 1996 to 2002. [1], [2], [3]

Thuss studied modern history and law at the Jena University and finished with a PhD in 2005. Between 1996 and 2004 he worked for various interest organizations in Bonn, Brussels and Berlin. He co-founded CFACT Europe in 2004 and served as its Executive Director. According to his profile at CFACT, “Dr. Thuss carries CFACT’s vision to conferences, seminars, and government meetings throughout the European Union.”

“[H]umans have had no measurable effect on global warming through CO2 emissions. Instead the temperature fluctuations have been within normal ranges and are due to natural cycles. Indeed the atmosphere has not warmed since 1998 – more than 10 years, and the global temperature has even dropped significantly since 2003.” [4]

“If the science is bogus and the economics don’t work, sooner or later policy makers will be forced to develop an exit strategy from their doom-and-gloom scenarios. I don’t see how they can reach any of their objectives at the upcoming UN climate conference in Copenhagen.” [5]

Thuss denied that EIKE was supporting a climate change denial symposium held in the German parliament by the far-right AfD (Alternative für Deutschland) party, despite the fact that it was promoted on EIKE’s website to “set facts against CO2 hysteria and climate activism.” [10], [11]

The AfD accelerated its promotion of climate change denial since the emergence of Swedish activist Greta Thunberg in August 2018. A smear campaign against Thunberg mocked her autism as a form of “psychosis” and compared her to a cult leader and a member of a Nazi youth organization. AfD attributed Thunberg’s popularity to the work of “PR professionals seeking to bedevil the plant-nutrient carbon dioxide.” [10], [12]

Holger Thuss led a CFACT–EIKE delegation at a scheduled “UNFCCC” press conference. According to the conference description and CFACT Europe, “The global warming scare and the inept and corrupt nature of proposed solutions have fallen far out of favor with the public and policy makers are taking notice and defecting.” [7]

Holger Thuss is behind an EIKE open letter to Angela Merkel, Chancellor of  Germany, that tries to convince her that “humans have had no measurable effect on global warming through CO2 emissions.” [4]

According to the letter (PDF),

“[T]here’s a growing body of evidence showing anthropogenic CO2 plays no measurable role. Indeed CO2’s capability to absorb radiation is almost exhausted by today’s atmospheric concentrations. If CO2 did indeed have an effect and all fossil fuels were burned, then additional warming over the long term would in fact
remain limited to only a few tenths of a degree.”

Thuss has not published any articles in peer-reviewed journals. His other publications and co-publications have included: