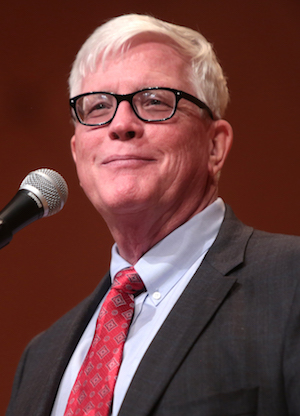 Hugh Hewitt is a conservative radio commentator best known for the nationally syndicated The Hugh Hewitt Show radio show, which he has run since July 2000. A 2006 profile in The New Yorker described Hewitt as “the most influential conservative you have never heard of.” [3], [4]

Before working in radio, shortly after graduating college, Hewitt worked as an assistant to former Pres. Richard Nixon. After attending University of Michigan Law School, Hewitt worked in several positions in the Reagan Administration. [4]

Hewitt joined KCET as a radio host in 1992, but felt the environment was too Liberal. He then joined Salem Communications in 2001. “Hewitt is so deeply conservative that it’s almost impossible to get him to accept the liberal point of view on anything,” The New Yorker wrote of him. Hewitt also developed and hosted the 1996 PBS series, Searching for God in America. [4]

Hewitt is a frequent guest on CNN, Fox News Network, and MSNBC where he was named a political analyst in 2016. He also writes regularly at his blog at HughHewitt.com. [5]

“I subscribe to the Hayward summary, Steven Hayward, great blogger at Powerline, says the temperature of the Earth’s gone up about one degree over a hundred years. No doubt mankind contributed to some of that. We don’t know how much. No doubt that it’s going to cause some effects. We don’t know what they are.”

Writing at his blog, Hewitt detailed what he described as the “responsible, conservative answer” to discussing climate change: [7]

“The responsible, conservative answer is to review the controversy over the climate change scandals, the majority opinion – that the planet is warming some but we don’t know how much, that humans contribute to the warming, but we don’t know by how much, and that we don’t know if it will be harmful or if there’s anything we can do about it – and a cautious preference for reducing greenhouse gases but not via a carbon tax or a cap-and-trade system that cannot work even if it was necessary because the world’s biggest emitters aren’t buying it nor should they.”

“I know you are not a climate denier. I know you very well.”

As reported at Media Matters, on the September 7, 2016, edition of The Hugh Hewitt Show, Hewitt claimed that we wouldn’t have to worry about climate change until 500 years from now. Hewitt said: [9]

“I’m not a climate denier. Temperature has gone up. Might have some global raising of tidal, water might rise a little bit here and there. Could be a real problem over 500 years. All right. But they’re going to say that as a result of that, you can’t use Kleenex.” [9]

“The Bonn Codicil to the Kyoto Protocol ought to have been a Robert Ludlum title, though Ludlum novels are, on the whole, more plausible than any plot that has industrialized nations hitting their near-term emissions reduction targets,” Hewitt wrote at the corporate-funded Tech Central Station in 2001. [10]

“The Kyoto Protocol has always struck conservatives not just as horrible economics, but also as an anti-democratic exercise in jam-down politics pursued on the international stage.” [10]

As reported by Media Matters, Hewitt proposed creating a “national commission led by men and women of impeccable credentials” to review climate science. Among names that Hewitt said he would “take very seriously” included Rush Limbaugh. [11]

“You get the picture: Diverse, smart non-scientists who are going to listen to the scientists — all of them — and report back on what ought to be done,” Hewitt wrote in an op-ed at The Washington Post. [12]

In the op-ed, Hewitt claimed that “we don’t know enough” about the cost of climate change, or “the nature of the risk.” [11]

Writing in a Washington Examiner op-ed, Hewitt described Scott Pruitt as a “brilliant” nominee for EPA administrator, and defended him against the “climate denier” label. [13]

“When Trump announced that he was sending Pruitt to the Environmental Protection Agency, the Left alternatively sputtered and swooned. The old ‘climate denier’ saw was immediately applied to Pruitt by the forces of bureaucratic government and their allies in the mainstream media, and the shrill attacks on Pruitt began and haven’t let up. But here’s the thing: Everyone knows the EPA has been acting lawlessly, has drawn rebuke after rebuke from courts, was run by secretive appointees who slink away in scandal and is populated with ideological extremists who reject the idea of congressional oversight. If there is a ‘swamp that needs draining’ it is the EPA, and Pruitt, the careful, sunny but strategic lawyer’s lawyer, is the administrator to do do it,” Hewitt wrote. [13]

Hewitt interviewed Donald Trump on his program. During the interview, Trump declared that he was “not a believer in man-made global warming.”  View excerpts from the transcript below: [15]

HUGH HEWITT: “Do you believe that the temperature of the Earth is increasing? And what would you do if you do believe that, vis-à-vis global climate change?”

DONALD TRUMP: “Well, first of all, I’m not a believer in global warming. And I’m not a believer in man-made global warming. It could be warming, and it’s going to start to cool at some point. And you know, in the early, in the 1920s, people talked about global cooling. I don’t know if you know that or not. They thought the Earth was cooling. Now, it’s global warming. And actually, we’ve had times where the weather wasn’t working out, so they changed it to extreme weather, and they have all different names, you know, so that it fits the bill. But the problem we have, and if you look at our energy costs, and all of the things that we’re doing to solve a problem that I don’t think in any major fashion exists. I mean, Obama thinks it’s the number one problem of the world today. And I think it’s very low on the list. So I am not a believer, and I will, unless somebody can prove something to me, I believe there’s weather. I believe there’s change, and I believe it goes up and it goes down, and it goes up again. And it changes depending on years and centuries, but I am not a believer, and we have much bigger problems.” [15]

“Of course, higher CAFE standards mean lighter SUVs. Lighter SUVs mean less safe SUVs. I haven’t heard many consumer safety groups arguing for that result. When the fatality rates rise, I doubt the sponsors behind the CAFE hike will be there to take a bow.”  [16]

In addition to regularly publishing at his blog and a range of news outlets, Hugh Hewitt has published a number of books including: