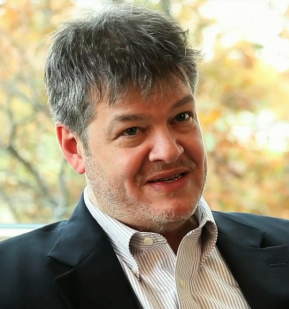 Jeff Jacoby is a conservative writer and has been a columnist for The Boston Globe since 1994. He was formerly the chief editorial writer for the Boston Herald. [2]

After graduating in 1983 with a law degree from Boston University Law School, Jacoby briefly worked at the law firm Baker & Hostetler. He also worked for WBUR radio as a political commentator for several years, and hosted the weekly TV program “Talk of New England.” [2]

In 2004 Jacoby received the Thomas Paine Award of the Koch-funded Institute for Justice, an award presented to journalists “who dedicate their work to the preservation and championing of individual liberty.” [2]

Jeff Jacoby regularly uses his column to promote climate change denial, suggesting that climate change may actually be good for us. He often calls those who believe the scientific consensus on climate change “alarmists” or “True Believers.” [3], [4]

“[Scott] Pruitt got it right: Measuring human impacts on climate is indeed ‘very challenging.’ The science is far from settled. That is why calls to radically reduce carbon emissions are so irresponsible — and why dire warnings of what will happen if we don’t are little better than reckless fearmongering,” Jacoby wrote at The Boston Globe. [5]

According to Jeff Jacoby, there are benefits to climate change: [3]

“But while climate change brings negatives, it brings positives, too,” Jacoby wrote at The Boston Globe. “Shifts in climate are like shifts in the economy: They invariably spell good news for some and bad news for others.” [3]

He added that “a warming planet could save some lives” due to less people dying from cold temperatures. “A warming planet will also be a greener planet,” he said, failing to note the more complex relationship between climate change, CO2 and plant growth. [3]

“Alarmists mindlessly condemn atmospheric CO2 as ‘carbon pollution,’ but carbon dioxide is essential to the health and growth of plant life.”

Writing at The Boston Globe in an article titled “A valentine for fossil fuels,” Jacoby criticized the divestment movement, saying “Such ‘fossil-free’ zealotry is justified in the name of climate change and its hazards.” He quoted Alex Epstein‘s Moral Case for Fossil Fuels, which he described as “dazzling.” [6]

“Ours is a much safer, richer, cleaner, healthier planet than it would ever have been without fossil fuels. Break up with the industry that makes our energy so abundant? Sending a valentine would make more sense,” Jacoby concluded. [6]

“In truth, global-warming alarmism is not science at all – not in the way that electromagnetic radiation or the laws of planetary motion or molecular biology is science. Catastrophic climate change is an interpretation of certain scientific data, an interpretation based on theories about the causes and effects of growing concentrations of carbon dioxide in the atmosphere,” Jacoby wrote at The Boston Globe. [7]

“Yet for all the hyperventilating, Pruitt’s answer to the question he was asked — whether carbon dioxide is the climate’s ‘primary control knob’ — was entirely sound,” Jacoby wrote at The Boston Globe. [5]

Jacoby contended that climate change is just too difficult to understand:

“Earth’s climate system is unfathomably complex. It is affected by innumerable interacting variables, atmospheric CO2 levels being just one. The more variables there are in any system or train of events, the lower the probability of all of them coming to pass. Your odds of correctly guessing the outcome of a flipped coin are 1 in 2, but your odds of guessing correctly twice in a row are only 1 in 4 — i.e., 1/2 x 1/2. Extending your winning streak to a third guess is even less probable: just 1 in 8.

“Apply that approach to climate change, and it becomes clear why the best response to the alarmists’ frantic predictions is a healthy skepticism.” [5]

Jacoby wrote a Boston Globe article claiming there is no consensus among scientists on climate change, and that the very idea of consensus is “authoritarian and anti-scientific.” DeSmog and Climate Science & Policy Watch reviewed the article, and found that “this assertion completely mischaracterize the way that science works.” The two reviews summarised that meteorologists supported the facts of human-caused climate change, reputable scientists that deny climate change are few and far between, and that climate models are accurate enough to clearly show that we’re headed for trouble. [4], [8], [9]

“In gathering 7 years’ worth of one-sided ‘evidence’ against climate science, Jacoby displays none of the openness that he expects of scientists. He uses a recycled quote and recycled factoids to make claims contrary to the agreement of nearly all climate experts,” Climate Science & Policy Watch reported, noting that a Richard Feynman quote Jacoby used in the piece is often used by climate change deniers to portray climate contrarians as protectors of the values of science. [9]

Writing at The Boston Globe, Jacoby repeated a series of myths about carbon dioxide psuhed by William Happer, who Greenpeace revealed charges himself out at $250 an hour to promote the benefits of carbon dioxide. [10], [11]

“[T]he distinguished Princeton physicist William Happer makes a compelling case that rising carbon-dioxide levels are neither unprecedented nor anything to fear,” Jacoby wrote.

Jacoby’s column was reviewed by Media Matters for America, who noted a range of fallacies in the article. In a letter to the editor, MIT atmospheric science professor Kerry Emanuel (who is a political conservative) said that Jacoby “offers us a false choice between panic and the denial of risk.” [12], [13]

“[W]e are treated to yet another round of the ‘climate is always changing,’ rather like a murder defendant telling the jury that people are always dying,” Emanuel wrote in his letter.

“Assessing and dealing with climate risk in an environment of highly uncertain science and expensive options is challenging enough without having to entertain the flippancy of your columnist. There is no scientific basis for his certainty that we have nothing to worry about.”

Jacoby reported on the “climategate” emails at The Boston Globe, describing them as “nothing short of scandalous.” [14]

“They reveal celebrated climate scientists apparently conspiring to corrupt the peer-review process, to suppress or finesse temperature data at odds with global-warming alarmism, to silence or discredit climate experts who criticize their work, and to hide or eliminate the raw data on which their own much-trumpeted claims have been based,” he wrote. [14]

The scientists involved in the emails would later be cleared of all wrongdoing by multiple independent inquiries. Announcing the findings in one of the investigations, Muir Russell said: “The honesty and rigour of CRU as scientists are not in doubt […] We have not found any evidence of behaviour that might undermine the conclusions of the IPCC assessments.” [15]

“No one who cares about the environment or the nation’s economic well-being should take it on faith that climate change is a crisis, or that drastic changes to the economy are essential to ‘save the planet’,” Jacoby wrote after posing the question “what if that looming catastrophe isn’t real? What if climate change has little or nothing to do with human activity? What if enacting cap-and-trade means incurring excruciating costs in exchange for infinitesimal benefits?” [16]

Jacoby wrote an opinion piece at The Boston Globe titled “Where’s the Warming?” [17]

Jeremy Jacquot wrote at DeSmog about some of the issues with Jacoby’s article. “Jacoby’s claim that 2008 was the coolest year of the past decade also misses the point and perfectly illustrates deniers’ tendency to cherry pick the data. As both Joe Romm and Greenfyre’s Mike Kaulbars have pointed out, 2008 also happened to be the tenth hottest year on record,” Jacquot wrote. [17], [18]

Writing at The Boston Globe, Jacoby claimed that “scientists and other ‘serious people’ who question the global warming disaster narrative are not hard to find.”
In response to Jacoby’s column, David Bernstein wrote at the Phoenix Sun: [20], [19]

“If Jacoby is going to keep at this topic, he needs to do so in a serious manner, not by citing the rare outlier. He needs to change course and stop citing evidence based on conflicting opinions. He needs to start presenting an argument for why we should listen to dissenters, rather than the overwhelming majority of people who have studied the issue.” [20]

Bernstein notes the sources Jacoby had cited included a petition by Fred Singer, signed largely by non-scientists, and a comment by non-climatologist Michael Griffin, for which he was denounced by NASA‘s top climate official. [20]

Jack Jacoby’s website lists over 1500 of his articles, primarily in The Boston Globe. View the attached spreadsheet for a full list of Jacoby’s publications (.xlsx).

Below are some examples on climate change: [21]