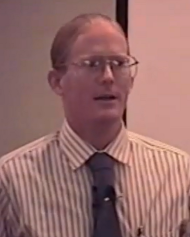 Keith Idso is the Vice President of the Center for the Study of Carbon Dioxide and Global Change (also known as CO2 Science), an organization funded by the fossil fuel industry which promotes the view that higher carbon dioxide concentrations in the atmosphere are benificial.

The Center is run by Keith Idso’s father Sherwood B. Idso and his brother Craig D. Idso.

According to his profile at CO2 Science, in 1999 Idso was appointed by the Arizona Speaker of the House of Representatives to serve on the Arizona Advisory Council on Environmental Education. The council supports environmental education programs that “offer balanced viewpoints on environmental issues based on current peer-reviewed scientific literature.”

“Actually, it is much more likely that the warming of the earth over the past century or so is merely a manifestation of the natural temperature variability that is regularly experienced by the earth on quasimillennial time scales.” [2]

“These proven positive consequences of elevated CO2 are infinitely more important than the unsubstantiated predictions of apocalypse that are hypothesized to result from global warming, which itself, may not be occurring from rising atmospheric CO2 levels. The aerial fertilization effect of atmospheric CO2 enrichment is the only aspect of global environmental change about which we can be certain; and to restrict CO2 emissions is to assuredly deny the biosphere the many benefits that accrue from this phenomenon.” [3]

“There are many direct biological benefits that result from higher atmospheric CO2 concentrations. Two of the most important are increased plant photosynthesis and water-use efficiency.”

“There appears to be a lot of confusion about the biological benefits of elevated CO2 because the popular media typically fails to report them. Doomsday scenarios of global warming are much more dramatic than the good news of global greening.”

“With this information, in light of the increasing human demands on vegetation, it is my personal opinion that capping CO2 emissions or reducing them to some prior level would be akin to ‘biting the hand that feeds us.’” [1]

Co-wrote a report entitled “Enhanced or Impaired? Human Health in a CO2-Enriched Warmer World” (PDF) with his father Sherwood and his brother Keith. [4]

The report argues that global warming and increased CO2 are beneficial to humans.

He noted that environmental stresses that may be brought on by increased CO2 have a negative effect on plant growth.

Idso testified that “it is clear that rising CO2 content of the air will boost global plant productivity and growth under nearly all environmental circumstances, promoting the production of the food, fiber, and timber needed to feed, clothe, and provide shelter for the planet’s rising population.”

According to one source (PDF), Idso had been explicitly invited “to testify about carbon dioxide and the positive effects that its rising atmospheric concentration has on plant growth and ecosystem biodiversity.” [7]

Presented a lecture at the 16th Annual Meeting of the Doctors for Disaster Preparedness (DDP) held in Scottsdale, Arizona where he talked about the biological effects of increasing atmospheric carbon dioxide. [8]

Keith Idso was one of several expert witnesses who testified on behalf of the Western Fuels Assocaition in St. Paul, Minnesota, to determine the environmental cost of coal burning by state power plants. [10]

According to a search of Google Scholar, Keith E. Idso has not published any articles in peer-reviewed journals on the subject of climate change. He has published numerous articles discussing plant growth in relation to CO2 concentrations.