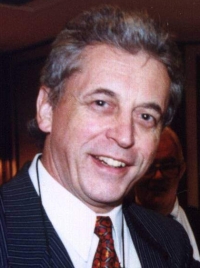 Leon Louw is the executive director and co-founder of the Free Market Foundation. He is also a member of the advisory board to the Committee for a Constructive Tomorrow and listed as a “global warming expert” by the Heartland Institute.

Louw is also the executive director of the Free Market Foundation’s “Law Review Project” (PDF) which describes itself as a “an independent legal research organisation founded to promote the removal of unnecessary, burdensome and unduly-restrictive laws with the aim of promoting economic development.” [2], [3]

“Climate change is probable. It may even be inevitable… . the best thing to do about it is to grow, to be prosperous, to be rich. Then you have all the wealth by which to deal with it.” [4]

“Climate change hype has grave real world consequences. It gets rich countries to adopt silly policies and to impose devastating eco-imperialism on poor countries. The world’s rich millions can afford environmental extremism; its poor billions can’t. Climate change pseudo-science about human causality has been exposed repeatedly. What’s less appreciated is that there aren’t more natural disasters in need of an explanation.” [5]

Referring to new anti-smoking bylaws: “’It’s a kind of hysteria, a peculiar semi-religious fundamentalist puritanism’ said Leon Louw, director of the Free Market Foundation, which is pushing for an open society free of arbitrary regulations.

Louw believes the regulations are a ‘vicious assault” on peoples’ choices and lifestyles, saying passing the regulations could constitute a breach of freedom and result in job losses.

‘The anti-tobacco fanatics … the nicotine nazis will not stop until there is full prohibition,’ he said.” [6]

Leon Louw was a speaker at a press conference arranged by CFACT that featured talks by Senator James Inhofe and Lord Christopher Monckton discussing “Climategate 2.0.” [7]

The conference was designed to coeinside with the UN Climate Summit in Durban, South Africa.

Co-author of the books South Africa: The Solution and Let the People Govern. According to a search of Google Scholar, Leon Louw has not published any articles in peer-reviewed journals on any subject.