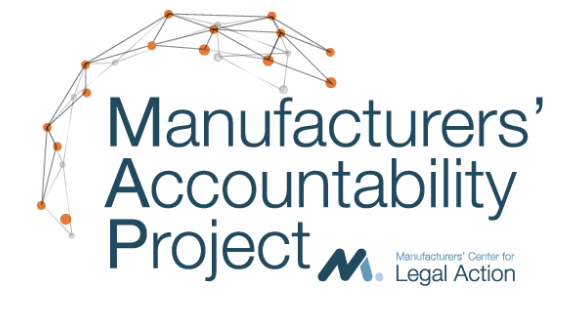 The National Association of Manufacturers (NAM) quietly launched the Manufacturers’ Accountability Project (MAP) in November 2017 to push back against climate change–related lawsuits affecting the manufacturing industry. The NAM claim that a “coordinated campaign jeopardizes the ability of all manufacturers to continue growing and providing jobs to millions of Americans.” [1], [2]

E&E News reported that the MAP campaign was launched to fight “activist litigation” with the goal of fighting “frivolous: lawsuits.” Its initial focus has been on climate change lawsuits against major oil companies. [3]

MAP is led by NAM‘s Manufacturers’ Center for Legal Action (MCLA), with both MAP and the MCLA headed by Linda Kelly, who is senior vice president, general counsel and corporate secretary at the National Association of Manufacturers. Shortly after the group’s formation, Kelly wrote an op-ed at The Hill, suggesting that attorneys have been dragging manufacturers into “fruitless lawsuits” over climate change concerns and that “[t]hese cases can have devastating impacts on entire industries and the jobs they support.” [4], [5], [6]

NAM CEO Jay Timmons said in a statement that while climate change is a “major problem,” it should not be blamed on the manufacturing industry: [7]

“Climate change is a major problem that we all must work together to solve–but it is inappropriate to blame it entirely on the manufacturing companies that we all rely on,” Timmons said in a statement criticizing Mayor de Blasio for his lawsuit against major oil companies.

Below is funding information for the MAP‘s parent organization, the National Association of Manufacturers (NAM), collected from publicly available 990 forms, and from data collected by the Conservative Transparency project. Note that not all individual values have been verified by DeSmog. [8]

See the attached spreadsheet for additional information on National Association of Manufacturers funding by year (.xlsx).

Goldberg formerly worked as a lobbyist for the coal industry, and his law firm Shook, Hardy & Bacon has a history of defending the tobacco industry. [20], [21]

Sharon Eubanks, a former Department of Justice lawyer who has worked on cases against the tobacco industry, compared MAP‘s fight of climate litigation suits to tobacco:

“It’s very similar what they’re doing, only the tobacco industry at least didn’t come right out and say ‘We’re going to target these lawsuits directly.’ They did so indirectly. But NAM and MAP, they’re like, ‘We’re targeting the lawsuits.’” [19]

E&E News reported that MAP began fighting back against Californian municipalities and cities that had sued more than 20 oil companies. MAP demanded a range of documents including paperwork, cellphone records, payments, and other documents containing the names of the oil companies. [17]

MAP said their goal was to expose details of the lawsuits against the oil companies:

“We really believe strongly in transparency. We think that taxpayers have a right to know what’s behind these lawsuits,” said Lindsey de la Torre, executive director of MAP. She added that “really what this whole effort is about is trial attorneys and politicians raising their public profile at the expense of manufacturers.” [17]

They said they became involved because oil manufacturers have been among those targeted by climate-related lawsuits. De la Torre declined to respond whether MAP gets any funding from oil companies.  [17]

Officials from the cities described it as bullying: [17]

“Instead of owning up to the liabilities and culpabilities of issues of climate change, they’re carrying out a very specific and targeted campaign of me and others. That’s very clear,” said Serge Dedina, mayor of Imperial Beach. “This is part of the fossil fuel industry playbook.”

MAP contended that the lawyers representing the cities “stand to gain a lot of money in these lawsuits.” Dana McRae, county counsel for Santa Cruz County, said that their aim is “ensuring that our taxpayers aren’t on the hook for climate-change-related damages knowingly caused by these fossil fuel companies.” [17]

Our outside counsel only gets paid if we prevail in court, so if MAP and Exxon are so confident that our lawsuits have no merit, let’s just go to trial and see who is right,” McRae said. “If MAP is really so concerned about attorney fees, they should start with the lawyers for Exxon and the other defendants. Those lawyers get paid for every six minutes they work, at rates that are upward of $1,000 an hour or more.” [17]

MAP announced it was launching an ad campaign to attack New York City Mayor Bill de Blasio after de Blasio said he would sue oil companies including BP, Chevron, Conoco-Phillips, ExxonMobil, and Royal Dutch Shell in the wake of the devastation caused by climate change. [11], [12]

“Mayor de Blasio’s frivolous lawsuit is a farce and a direct threat to the jobs and livelihoods of manufacturing workers in New York and across America,” NAM President and CEO Jay Timmons stated in a February 13 MAP news release. [13]

Jay Timmons later went on Fox Business News with Charles Payne where he discussed de Blasio. ““Another problem that we’re facing and another reason that I’m here in New York today, Charles, is we are fighting against trial lawyers and politicians who want to take down manufacturing. Mayor de Blasio is suing energy companies right now for the subject of climate change,” Timmons said.  [15]

One of MAP‘s first actions was to criticize the investigation by Democratic state attorneys general investigating what ExxonMobil knew about climate change, although MAP would also target other issues they see as impacting industry’s bottom line. [2]

According to Linda Kelly, “We’re trying to raise awareness of the tactics that are behind these lawsuits and some of the groups that are funding them and how different interest groups are teaming up with state officials, because these lawsuits are being brought by states and by cities and counties, and show this isn’t an organic effort of different states and cities to try to recover damages.” [2]

E&E News reported that the MAP campaign was launched to fight “activist litigation” and would primarily consist of a website, with the goal of fighting “frivolous: lawsuits.” Its initial target included litigation by the cities of San Francisco and Oakland against BP PLC, Chevron Corp., ConocoPhillips Co., Exxon Mobil Corp. and Royal Dutch Shell PLC for damages under state public nuisance law. [3]

The MAP lists a number of endorsing manufacturing organizations on its website including the following: [16]

MAP does not provide a physical contact address separate from that of the National Association of Manufacturers.