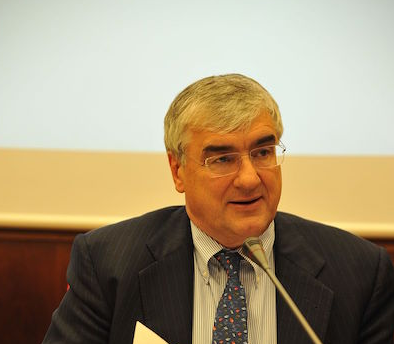 Australian hedge fund manager Michael Hintze is one of the biggest donors to the UK’s Conservative Party and has been dubbed the godfather of Tory donors by some in the British press. He also donated money to the Brexit campaign and is one of the key funders of UK climate science denial thinktank the Global Warming Policy Foundation. [2], [3], [4]

In 1999 Hintze launched his hedge fund Convertible & Quantitative Strategies (CQS) in London after stints at Goldman Sachs and Credit Suisse First Boston. In 2011, Hintze was also revealed as one of Liam Fox’s closest supporters. Hintze helped to bankroll office space and trips for Fox and colleagues involved with the now defunct libertarian thinktank the Atlantic Bridge. Hintze was also a member of the Atlantic Bridge’s advisory council along with Boris Johnson and Michael Gove. [2]

Hintze is also a trustee and funder of the UK neoliberal thinktank the Institute of Economic Affairs. Hintze and his charitable family foundation have also donated to charities of the UK‘s Prince Charles, to restoration works in the Vatican, and to various organisations in the arts and museums world. The Hintze Hall in London’s Natural History Museum was so named after a $5 million donation from the Hintze foundation. [5], [2], [6]

According to a search for “Michael Hintze” at the Electoral Commission, he gave at least the following amounts to political parties and candidates between 2002 and 2018: [7]

While Hintze avoids public statements, he is reportedly one of the earliest financial backers of the UK’s only climate science denial thinktank the GWPF. A dedicated supporter, he attended the group’s 2017 annual invitation-only lecture delivered by former Australian Prime Minister Tony Abbott. [8], [9]

“Markets are a good thing and they are the best way of ensuring we have fairness,” Hintze said in an interview with the Daily Mail. [10]

Hintze donated £100,000 to the Vote Leave campaign group on 22 June, the day before Britain headed to the polls to vote in the EU Referendum. [11]

Through a family trust, the Hintze Family Charitable Foundation, Hintze and his wife donated £5 million to the Natural History Museum in London. This was the largest donation the museum had ever received in its 133-year history, and saw the renaming of the central hall to Hintze Hall. [12]

The money will be used for scientific research and to maintain collections, it was reported at the time. “We feel privileged to be able to make a contribution towards securing this centre of scientific knowledge and research for present and future generations,” Hintze said. [12]

In 2009 Theresa May, then Conservative shadow minister for work and pensions, was the beneficiary of £1,200 in “hospitality” from Michael Hintze. [7]

Hintze donated £10,000 to Liam Fox, who at the time was the UK’s Defence Secretary and founder of the Atlantic Bridge. [7]

Michael Hintze does not appear to have published any articles in mainstream news publications.