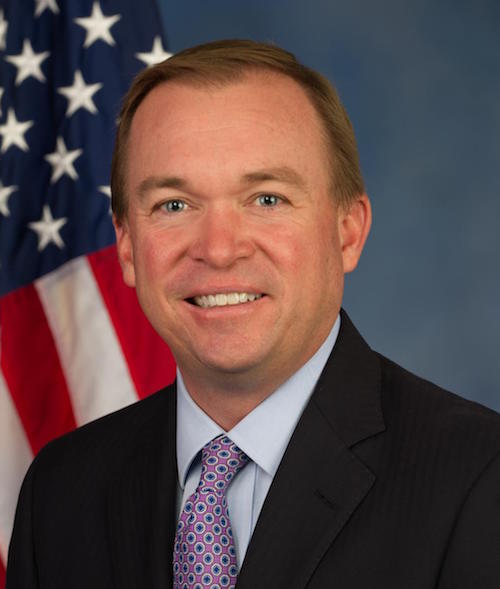 He received a degree in international economics, commerce, and finance from Georgetown University and a law degree from the University of North Carolina. Before working in government, Mulvaney practiced law for several years and then joined his family’s real estate business. [2]

Mick Mulvaney, chosen by President Trump to lead the Office of Management and Budget, is known as a budget “hawk” who has historically wished to cut federal spending. Mulvaney said he would restore budgetary and fiscal sanity […] after eight years of an out-of-control, tax-and-spend financial agenda” under the Obama administration. [3]

According to the League of Conservation Voter’s “National Environmental Scorecard,” Mick Mulvaney has a lifetime score of 7%, and a 2015 score of 3%, with the majority of his votes classified as “anti-environment.”

Mulvaney has historically opposed funding for planned parenthood. In 2015, he called on House Republicans “to use every available tool to strip this organization [Planned Parenthood’ of any and all taxpayer funds.”

Trump Pick as Director of the Office of Management and Budget

In December, 2016, Donald Trump selected Mick Mulvaney for the position of Director of the Office of Management and Budget. [8]

“He’s a tremendous talent, especially when it comes to numbers and budgets,”  Trump said in a statement.

The Club for Growth applauded Trump’s choice of Mulvaney as Director of the Office of Management and Budget, announcing that “The days of the White House producing massive, ridiculous budgets that are dead on arrival on Capitol Hill are over.” Club for Growth president David McIntosh described Mick Mulvaney as  “a leader among economic conservatives, and the Trump Administration’s selection is a major victory for taxpayers and for all who want to see the downsizing of the federal government. […]” [9]

Mulvaney’s nomination could face some challenges, given his disclosure that he failed to pay taxes for a household employee in the early 2000s. The Atlantic reported that He had failed to pay more than $15,000 in taxes, noting that such disclosures have threatened the nominations of high-profile presidential picks in the past. [10]

During his confirmation hearing, Muck Mulvaney made a number of statements at odds with the views of President Trump. For example, Mulvaney believed that tax increases could be on the table. Associated Press reported that Mulvaney said he would be open to increasing the amount of wages subject to the Social Security payroll tax, in addition to gradually raising the retirement age and other benefit cuts. While as a member of Congress Mulvaney had signed a pledge not to raise taxes, he has said “I will not be bound by that.” [11]

After trying to avoid the question, claiming that climate change was not part of the responsibilities of the OMB director, Kaine still demanded an answer.

“I’m not convinced we’re at the point where we have to start to require American citizens to pay high prices ―” Mulvaney began to reply, before Kaine interjected.

“I’m just asking, do you agree with the fact. Is climate change driven by human-generated CO2 emissions a huge risk?” Kaine repeated.

“Yeah, I challenge the premise of your fact,” Mulvaney said.

“Energy independence, green technology, and innovation is something we should pursue as a nation. However, we shouldn’t seek to accomplish that by taxing people based on questionable science. Neither should we ignore domestic energy resources – coal, natural gas, oil – because of baseless claims regarding global warming.

“I believe that making it easier to drill for and use domestic resources, build nuclear power plants, and develop new technologies is the best formula for ending the current energy regime, which essentially has us empowering governments and groups that are markedly anti-American.”

Mother Jones reports that in a September 9 Facebook post, Mulvaney questioned whether the federal government should be spending any money on scientific research: [14]

“And before you inundate me with pictures of children with birth defects, consider this:

Brazil’s microcephaly epidemic continues to pose a mystery – if Zika is the culprit, why are there no similar epidemics in countries also hit hard by the virus? In Brazil, the microcephaly rate soared with more than 1,500 confirmed cases. But in Colombia, a recent study of nearly 12,000 pregnant women infected with Zika found zero microcephaly cases. If Zika is to blame for microcephaly, where are the missing cases? According to a new report from the New England Complex Systems Institute (NECSI), the number of missing cases in Colombia and elsewhere raises serious questions about the assumed connection between Zika and microcephaly.”

“Medicare as it exists today is finished.”

According to data from OpenSecrets.org, Koch Industries was consistently a top donor to Mick Mulvaney and his related Leadership PACs. Duke Energy was another consistent backer. View top ten donors below, or see the attached spreadsheet for Mick Mulvaney’s campaign donors by year (.xlsx). [16]

Nearly 100 internal documents were leaked to Axios in 2019. As Axios reported, the documents identified a host of “red flags” about many individuals who would go on to work in the Trump administration, as well as others who were considered but failed to secure a position. [39]

Mulvaney was listed among the documents. Some notable samples from the internal documents below:

“Mulvaney Said That ‘One Thing We’ve Learned About Donald Trump During This Campaign Is That He Is Not A Very Good Person’ And That ‘I Don’t Particularly Like Donald Trump As A Person.’”

Mick Mulvaney appeared for his confirmation hearing to become director of the Office of Management and Budget. Full video below: [17]

However, he also added that younger workers should expect to work longer than their parents.

“I think folks on Social Security and Medicare ought to be really worried,” said Sen. Debbie Stabenow, D-Mich. “The alarm bells should be going off right now.” [18]

Senator Bernie Sanders read quotes from Trump’s campaign where Trump had said he would not cut the benefit programs.

“The only thing I know to do is to tell the president the truth,” Mulvaney said. “I have to imagine that the president knew who he was getting,” he added. [18]

“Yesterday, John McCain joined the Democrats to attack Rep. Mick Mulvaney, Trump’s pick to head his OMB. This is wrong.

Mich Mulvaney spoke at an event hosted by the John Birch Society, an “ultra-conservative” group known for its continued emphasis on the communist threat and described by some as an embarrassment for the right, reported Mother Jones. [20]

Mulvaney’s speech would address “the Federal Reserve’s role in bailing out Europe.”

Mother Jones obtained audio of the speech, noting that Mulvaney proceeded to criticize the Federal Reserve, saying its actions have “effectively devalued the dollar” and “choke[d] off economic growth.” He praised bitcoin as a currency that is “not manipulatable by any government.” He told his audience, “You all put out some really good stuff and it’s always interesting.” He said he was “looking forward to reading The Shadows of Power,” a 1988 book by James Perloff with the subtitle “The Council on Foreign Relations and the American Decline.” The book advances conspiracy theories about the New York-based think tank, alleging that it advocates “the creation of a world government.” After referring to this book, he told the crowd, “Keep doing it.” [20]

Mick Mulvaney introduced a bill, H.R. 4745, that would allow nuclear waste to be stored in interim storage facilities. While Mulvaney didn’t specify where the interim site would be, he said the material should not stay in South Carolina or at power plants in other states. [21], [22]

Power plants “are in the power generation business,’’ he said. “They’re not supposed to be in the waste-management business. The whole idea is the best way to manage this stuff was to put it at one site.’’ [22]

Mick Mulvaney was one of 54 members of Congress to sign an letter to the House Leadership calling to end the Wind Production Tax Credit. [23]

“[W]e believe Congress should stop picking winners and losers and finally end the wind PTC,” the letter concludes. ” We applaud Chairman Camp’s leadership on this important issue and urge you to stand firm with him in opposition to extending this provision and allow the wind energy to compete on its own.” [23]

Mick Mulvaney was one of those who voted “yes” on Reversing President Obama’s Offshore Moratorium Act (Bill H.1231). The bill would open up the outer Continental Shelf to drilling, an area containing an estimated 2.5 billion barrels of oil, and more than 7.5 trillion cubic feet of natural gas. [26], [27]

Mick Mulvaney signed the “No Climate Tax” pledge (PDF) sponsored by Americans for Prosperity, the Competitive Enterprise Institute, the National Taxpayers Union, and the Institute for Liberty. His pledge reads as follows: [30]

“I, Mick Mulvaney, pledge to the taxpayers of the State of South Carolina and to the American people that I will oppose any legislation related to climate change that includes a net increase in government revenue.” [30]

Mick Mulvaney was a signatory to the 2010 Contract from America, a legislative agenda put forward by the Tea Party movement and unveiled the day before Tea Party Protests scheduled to be held across the country on April 15, Tax Day. The contract took inspiration from the Contract With America, released by Representative Newt Gingrich and fellow Republicans in the 1994 midterm elections, reports The New York Times. [31], [32]

Oneof the contract’s “agenda items” is to “Reject Cap & Trade” and “Stop costly new regulations that would increase unemployment, raise consumer prices, and weaken the nation’s global competitiveness with virtually no impact on global temperatures.” [33]

Contract from America describes itself as a “a grassroots-generated, crowd-sourced, bottom-up call for real economic conservative and good governance reform in Congress.” The Contract from America website launched in September 1, 2009 and the final contract was revised until it was released in April, 2010. According to their website, the contract received support from individuals from groups including FreedomWorks, National Taxpayers’ Union, Liberty Central, American Solutions, Regular Folks United, and various tea party groups. [34]

“Founding Partners” listed on the Contract from America website include:

Mick Mulvaney has published or co-published a range of Op-Eds and article. See some samples below: